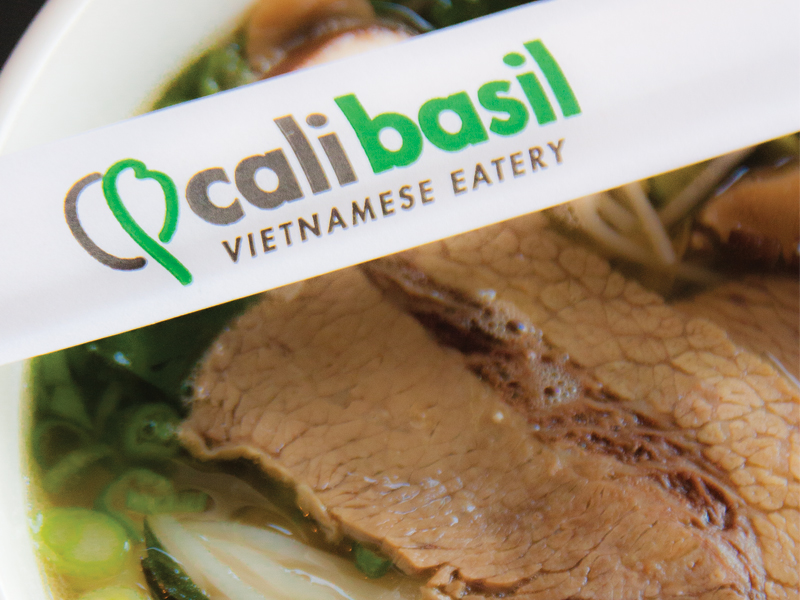 After years of being the only Vietnamese restaurant in the University Village, Pho Vinam has finally met a formidable rival: Calibasil. Situated next door to Lollicup and connected to its sister restaurant, Oven 450, Calibasil is easy to find and access for all UCR students as an alternative fast food restaurant.

Calibasil is the first of its kind (or that I’ve seen); a Chipotle-style Vietnamese eatery. The hosts ask their customers to choose an entree of their choice, which varies between four Vietnamese classics: pho noodle soup, bahn mi sandwiches, egg rolls and spring rolls. After choosing an entree, customers travel through a conveyor belt operation, where they can pick what goes into their meal, such as the type of meat, broth and various garnishes.

When I arrived at Calibasil, I was greeted with a wave of Vietnamese pho aromas that enticed me to order a bowl of soup. The restaurant was bright and clean, with an interesting light fixture made out of vermicelli noodles. At the counter, I was overwhelmed by the amount of customization the entrees offered. I ordered the House Special Pho, which included sliced beef tenderloin, sliced brisket and Vietnamese meatballs. As soon as I ordered, the employee hastily began to prepare my soup by grabbing a handful of noodles and boiling them in a pool of water. I moved along the countertop of condiments, adding in lime, bean sprouts and a handful of garnishes that usually accompany pho. Also intriguing was the option of what broth you wanted, of which you had the choice of beef, chicken or vegetarian. Additionally, I ordered some chicken egg rolls and a cup of Vietnamese iced coffee. My friend who tagged along decided to order the house bahn mi sandwich and spring rolls.

At first glance, the wide bowl of soup looked like a lot of food, until I noticed that the bowl was shallow, and thus only gave the illusion that it was full. The moment I sat down I sipped a spoonful of the glistening beef broth. It was savory with hints of beef and a mildly sweet aftertaste. I was also surprised at how well the noodles were made. They were cooked perfectly al dente — not overcooked to the point that they dissolved in your mouth and not undercooked to the point that they were tough to eat.

After consuming half of my pho, I tried the egg rolls. What I found different about them was that in addition to being wrapped in traditional egg roll wrappers, Calibasil went a step further by also wrapping them in a layer of vermicelli, which gave it an extra crispy shell without feeling like you are biting into a block of oil. The filling was a tasty mixture of ground chicken, spices and vegetables. An added plus was the house fish sauce, which was sweet with a small kick of spiciness not usually found in fish sauce. It went delightfully with the crunch and flavors of the egg rolls.

I periodically took sips of my Vietnamese iced coffee throughout my meal, which was made strong — something I actually enjoyed. And, to my pleasure, it was not mostly filled with ice like some restaurants do with their iced coffee. However, despite the strong coffee flavor, there was a tad too much condensed milk put into the drink, resulting in an overly sweet beverage that I actually had to dilute with water.

I tried some of my friend’s meal and was thoroughly disappointed in both the bahn mi sandwiches and the spring rolls. The House Special Bahn Mi comes with a pork pate (a type of meatloaf), barbecue pork and condiments such as cilantro, pickled vegetables and a garlic mayo sauce, all “served on a fresh baguette.”  While the sandwich looked appetizing, my first bite of it was disenchanting. The “fresh baguette” was tough and cut into the top of my mouth. The pate and barbeque pork tasted bland and the condiments added to the sandwich were too few to actually give additional flavor. In other established bahn mi restaurants, the sandwiches are given a fresh taste thanks to the tangy pickled vegetables. This is all overpowered by the heaps of garlic mayo sauce used to compensate for the lacking flavor of the other ingredients.

Finally, their “individually handmade” spring rolls were the most disappointing item on their menu. When they say that their spring rolls are handmade, it truly shows in the sloppy presentation of the rolls. They were flimsy and fell apart easily, instead of tightly wrapped vehicles for the fillings to easily travel from the plate to your mouth. The spring roll loses half of its fillings when you dip them in the laughable hoisin peanut sauce, which only contained peanut in the name, not color or flavor. While the ingredients in the spring roll were pretty tasty on their own, the slipshod presentation of the rolls really turned me off.

I can see this place becoming popular due to its streamlined approach to Vietnamese food, and such streamlining is always welcome to any student-dominated area where people are too busy to sit down for long periods of time waiting for their food. Although it is worth noting that despite such streamlining, I noticed it took quite some time to order a bowl of noodles, watch them boil it and slowly put the condiments in the soup. This could cause huge hold-ups when there are lines of people during meal rush times. However, despite the hiccups in their service and weaker items on the menu, Calibasil serves quality noodles and egg rolls and provides students a convenient and innovative way to enjoy Vietnamese food.