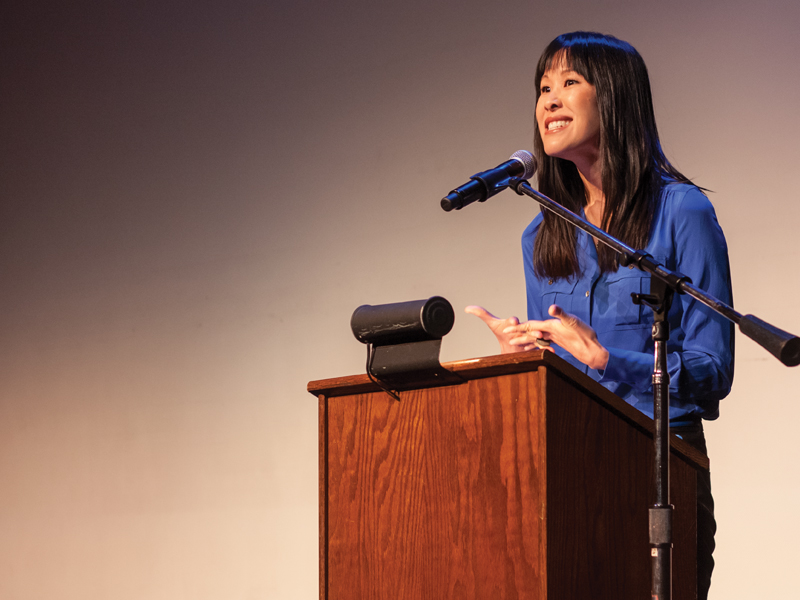 Many, if not all, of the guests who filled the University Theatre last Thursday have the aspirations to fulfill their dreams post-graduation. Students and others may not all share the same goals, but what if the chance of conquering said goals was soon dissipated, along with their chance to live? That each breath was just a reminder of how precious life really is? Laura Ling, renowned American journalist and writer who had the same goals as the audience throughout her academic career, came to UCR to share how those dreams were quickly swept away when she was taken captive by North Korea in 2009. In honor of Asian Heritage Month, the Asian Pacific Student Programs’ event “Trapped in North Korea” illustrated the life of Laura Ling and how she went from journalist to captive to the woman that former President Bill Clinton saved from North Korea.

Upon entering the theatre, the campus club Liberty in North Korea greeted guests at the door. The public event welcomed not only students but the public as well. Edward Chang, ethnic studies professor at UCR and founding director of the Young Oak Kim Center for Korean American Studies, was the opening speaker. He gave the audience a brief history of the division of North and South Korea in 1945 and how prominent it is today. Dean of Students Ryan Alcantara introduced Ling with her background and accomplishments of dipping into television, constant humanitarianism and prestigious journalist.

With her first big break of working for Current TV Ling traveled all over the world to explore the prisons of Myanmar, the war in narco-trafficking, slave labor in Haiti and much more. A video was shown of a few clips of some of her prior work and displayed her travels to Mexico to research the narcotics war of the drug cartels. The gruesome footage showed her firsthand encounter with a car littered with 50 or more bullet holes; her short distance from the two bodies, whose blood dripped out of the garbage bags that tried to conceal their mutilation; her experience with the one of the men’s mothers, who was dragged away from the crime scene screaming and cursing the murders.

It also played the footage from her trip to northeastern China, in February 2009. Here, she reported on the population who either fled for their lives or was sexually trafficked to stay alive. The population in China of 40 million more men than women has forced these women in this country into prostitution, sold into marriages or thrown around as livestock.

On March 17, 2009, Laura Ling’s camera crew and guide took a break from the humanitarianism to film the frozen river that runs past North Korea. Ling painted the picture for the audience of the group’s hired guide walking onto the ice, and the crew following suit. They saw their guide continue his journey across the ice, closer to North Korea. At some point in Ling’s walk across, she found her foot on North Korean soil. With that, she turned to walk back. But suddenly, muffled yells grew louder as she whirled around to see Korean soldiers sprint toward them, rifles pointed into the air. They ran.

They ran as fast as they could, the ice almost stretching out further with each step. Her foot broke through the ice and she fell into the water. She could see that most of her crew, guide included, crossed over the border. Ling pulled herself out and picked up her pace, alongside her colleague. But they were pulled to the ground. Fingernails clutching onto Chinese land, they tried to claw their way back to what they knew was safe, but instead came eye-to-eye with the barrel of a rifle. The soldiers kicked the two women in the head, torso and back, crushing the rifle into their necks and faces. As the two women were physically dragged along the ice into North Korea, Ling felt her microphone still attached to her shirt. “Mitch,” she spoke into the speaker trying to reach her cameraman, “I think I am going to die.”

North Korea is one of the poorest countries in the world and is known for having the darkest satellite picture taken at night. “It literally looks like a black hole compared to South Korea,” Ling said. When she and her partner got deeper into this black hole, the two women found themselves in a “five-by-six” jail cell in an army base. She finally looked at herself in the mirror and pondered how it was really her behind the black eyes, busted nose and purple flesh. She remembered the notebook carried among the film crew that contained possible propaganda against the country. She swallowed those notebook pages whole. Both spent two days in the jail cell until they were both separated into their own rooms.

When Ling went to trial, she was sentenced 12 years of hard labor. She sat on the floor of her room, counting the seconds that felt like hours. She tried to find hope in any positive sightings. “I would be thankful for seeing a butterfly outside my window, even though I could not breathe the fresh air.” It wasn’t until the guard — a guard who previously berated her a few weeks prior — told her “always have hope.” Ling felt as if she created new relationships with these guards as they gave her more amenities than others. She received letters from her family and husband, each giving “the breaths that kept (her) alive.” She received some of these letters with coffee stains, evidence that they were the guards’ morning read. She then earned phone calls to her sister and she tried to decipher the puzzle of what the North Koreans really wanted in exchange for her to go home.

Ling’s sister contacted the former head of Current TV, former Vice President Al Gore. Al Gore then contacted Bill Clinton, who spearheaded the mission to save them. One morning, Ling and her colleague were reunited as there was a “powerful envoy on North Korean land.” She had no idea who this was, but when she looked down the long hallway to see a bald man in a suit, earpiece peeking out from the back, and black sunglasses covering his stone face, she knew she was in the presence of America. The man stood at the end of the long hallway outside of a closed door. Not shortly after, Clinton exited the room. He explained there was still some work to do, but he was sure they could go home. Not many hours later, she was flying back to the United States.

She had no idea that the sole reason she had the chance to go home was Bill Clinton. In fact, the president of North Korea at the time, Kim Jong-il, simply wanted to meet Clinton. Apparently, 20 years ago, when Jong-il’s father passed, Clinton was the first to call and pay his respects. The smallest of deeds made 20 years prior saved two lives. “Literally the littlest things count,” Ling put it.

Laura Ling left the audience with an excerpt from the poem “I Know Why the Caged Bird Sings” by Maya Angelou — a poem that embodied her entire experience. She suffers from panic attacks and nightmares from time to time, but nothing could be as blissful as her life here at home. She now works for E! Network, using “E! Investigates” to engage with young Americans with issues such as teen suicide and depression. Her life thus far is far from what one could fathom their life could be. But nevertheless, the wound on her head is a constant reminder of how precious life is.

Besides the sniffle from holding back tears, the audience was completely silent. Ling mentioned how it took almost losing her life to get back in touch with her friends from college. “The friends you make here will always be there … don’t take them for granted.” Keep that in mind, Highlanders … don’t wait until it’s too late to live your life.