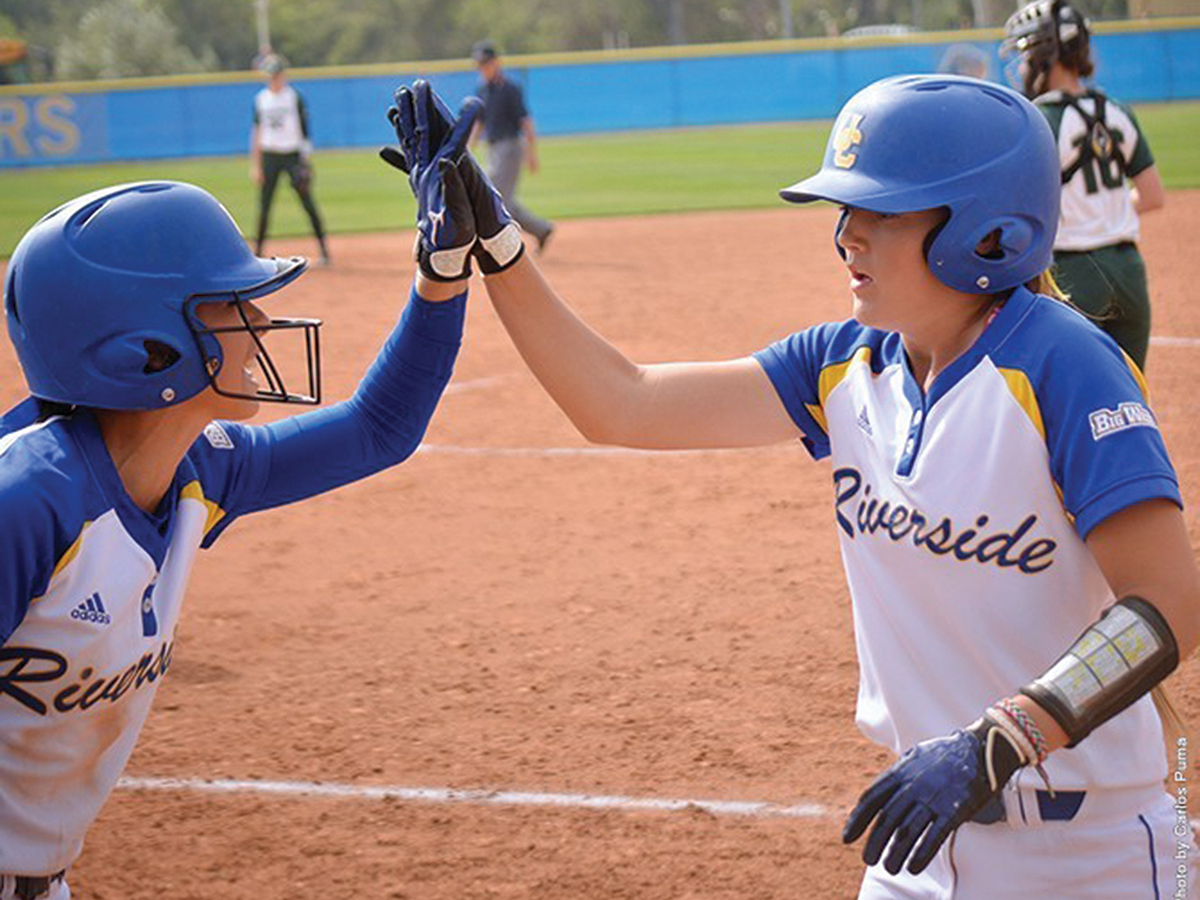 UCR softball: Looking back and moving ahead

Pride is a term that can be interpreted and misconstrued in many ways. Some of the most successful and polarizing athletes in the history of sports — from Kobe Bryant to Zlatan Ibrahimovic — carry with them an almost monstrous pride that can negatively influence relationships with teammates, team staff and the media. However, pride can be wielded and used to bring people together with a common mindset and a common goal, and that’s what UCR Head Softball Coach Linda Garza and her team did this year. This was a sense of pride that was developed through the team’s improvement over the last two seasons, and it showed statistically. Garza compared it to when she first arrived, saying, “Traditionally, when I first got here four years ago, we found ourselves at the bottom of conference, bottom in hitting, bottom in defense (and) bottom in pitching. I am pretty proud we finished the season hitting .300 as a team. It’s the first time in program history; I believe last season was our best offensive season with .286, so to go and beat that is pretty impressive.”

This improvement was rewarded by five All-Big West Conference selections headlined by sophomore Maddy Richard, whose .452 batting average was good for 15th in the nation, and her .513 on-base percentage placed her 47th. On top of leading the Big West in both categories, she also led the conference with 38 stolen bases. All of the team’s core players are returning next year, but Garza believes that there is always room for improvement. “We’re still average athletes in certain ways,” she said. “Our kids’ work ethic and demeanor though (are) to me what sets us above and why we are able to compete with to me the more talented groups. If you want to get into a conference championship, if an athlete can hit .300 without doing extra, and you have to do extra five days a week in order to just come close to .300, are you willing to work hard enough to get into that?”

At the beginning of the season, it seemed that the departure of Chelsea Ponce — who pitched the team’s first Division I no hitter and sported a 1.34 ERA for the Highlanders in 2015 — would be too great of a loss to overcome. But according to Garza, a tournament that ended with a tight game against one of the nation’s best turned the season around. “I think we really found ourselves at Fresno State. We went to Arizona State (for the Kajikawa Classic) and I think our freshmen got funked fast and our sophomores who’ve played a lot got introduced (to stiffer competition),” Garza admitted. “We got slapped tough. I think we went 2-3 in that tournament, and then we went to Fresno State. We ended up 3-2, however we lost one run games, (one to then #25) Fresno State in almost extra innings on a call that could have gone either way. That was, I think, the first time we realized that we can compete. And when you realize you can compete and you can stay in the fight for 12 rounds, our job is now to figure out how to finish those fights.”

While the team may not have pulled out a win against Fresno State, the loss left the team with a mindset that prevailed the rest of the season. “We ask our kids to understand where they’re at and who you’re competing against. We ask them if they are working hard, and most of our kids will say yes, and the next question quickly following that is, ‘are you working hard enough?’ So, are you working hard enough to feel the gap between where you are, and where your opponent is?” The team truly bought into Garza’s philosophy, following up the loss with a program record 11 consecutive wins, averaging 6.36 runs scored per contest.

Despite this work-first mentality, Garza and her team were able to enjoy all of their success fully. “In conference, some of our home tournaments, coming back in those last innings and those comeback victories, and going on those 11 game win streak … basically over two and a half weeks we didn’t lose a ball game, those were fun. We always won it in different ways; we either won it on defense one time or on offense or our pitching came through. This is one of the funnest teams that I have been around that collectively they get along, nobody points fingers, we take ownership and accountability when we could’ve done something differently.”
“I’m excited about the future. I’m sad that (this season) is over, because you never know what the future is going to have,” admits Garza, “However, I am incredibly proud of what we were able to do and how we were able to do it.”