On Saturday, Oct. 8, within the entire vicinity of the third floor of the Highlander Union Building (HUB), people from across Southern California gathered to celebrate their ardor for one single pastime and even participate in it together. Aside from the expected attendance of the UCR student body, many attendees came from other colleges. This hefty list included people from University of California, Irvine, University of Nevada, Las Vegas and University of California, Los Angeles, just to name a few. Within the large auditorium room of HUB 302, where most of the action took place, there was laughter, displays of companionship and fervent yelps of glory.

No, this is not a description of a sports event, or a science fair, or a team spelling bee. Rather, this was the setting of the first large-scale gaming event ever to take place in the Inland Empire  — Highlander Con — and it happened right here on UCR’s campus.

You’d think that with an event that involves gaming, there’s much isolation and individual work going on instead of teamwork and collaboration. However, Sabrina Wong, third-year economics major and president of Highlander Gaming, who led the coordination of the event, wants to break that stereotype of gaming and let people see the different sides of it that do not often come under light.

“What I’m really concerned about is people just sitting alone, not really enjoying the Riverside community but just being in their dorm rooms playing games by themselves,” says Wong. “That’s not the case because we can build a community where they are all engaged in gaming together.” According to Wong, Highlander Con and other gaming conventions are “where the stereotype breaks. People are talking to each other, people are really getting to know each other. They’re making friends and not only that, they’re also making career connections.”

Highlander Con was brought into creation by the UCR Highlander Gaming club, which strives to “present a social and competitive atmosphere for games such as ‘League of Legends,’ ‘Starcraft 2,’ ‘CS:GO,’ ‘Overwatch’ and more.” However, that’s just one description of the many that comprise of the high-striving club. Many of these values instilled in the club were reflected in the goals of the convention itself, as it was not merely to unite people through their mutual love for videogames but to cultivate this community with as many resources and upfront experiences demonstrating the possibilities and benefits within gaming.

The incentive to go into the gaming field is particularly tied to the immensely rapid growth of the esports and gaming industries. Therefore it allows for increased college student involvement in gaming development, technology and marketing as well as many other aspects of esports.

To harness this opportunity for UCR students, Highlander Con hosted three different panels at with representatives from collegiate esports companies, prominent gaming enterprises and UCR students who worked in the game development field to talk about their experiences.

During the CHASS gaming careers panel, a group of industry professionals relayed personal anecdotes of how they developed their interests in the esports sector and established themselves as major figures in the forefront of the enterprise. When asked where each of them saw themselves in the gaming field in four years, Rob Lee, whose gaming alias is “Leonyx,” explained that “four years in esports time is 40 years in any other time and industry.”

Lee shared his story of how merely two years ago, he was still living in the basement of his mother’s home. He is now recognized as the creative director of Immortals, a professional esports organization that began with “League of Legends,” and only sees himself exponentially moving forward. In regards to the potential of esports, Lee simply put it: “The sky’s the limit.”

For those of you who are completely uninformed of video game development, it isn’t too late to start growing your knowledge on gaming now. The game development panel revealed to us that there are easily accessible resources, such as Gamespawn, that teach people different aspects of game design. Members of Gamespawn revealed that even with the little-to-no knowledge they had in programming prior to college, they are now invested in various projects with game design and development.

Along with educating collegiate gamers on the multitude of career possibilities within gaming, Wong also stated that another major objective of the event was to ramp up school pride. “We want (our gamers) to be proud to go here. If they are the best esports team, they can say that they go to UCR and we have one of the best video game clubs in the nation.”

However, when talking about the club in general, Wong clarified, “We put a lot of effort into making sure that our teams aren’t toxic and have good sportsmanship to really represent UCR well. We really push the sportsmanship aspect as well as success. We want them to be good at school so they all become friends. It’s all about feeling like you’re in the right place, like you belong somewhere.”

This positive mindset was demonstrated in the large gaming room in HUB 302, where there were rows of laptops, portable TVs and many merry gamers indulging in the enjoyment of their hobby as well as in HUB 355, where gamers excitedly accumulated to join the world viewing party of “League of Legends.” Numerous different games were being played at once, these being “Super Smash Bros. 4,” “Smash Melee,” “Hearthstone,” “Overwatch” and “League of Legends.”

In order to pass on to the final tournament, which would be displayed on a large projector at the stage of the assembly room, they had to win a series of games at the rows of game stations. When someone was close to winning, more onlookers would gather and tension would be apparent as people took to cheering for their desired victor. However, even though the competition was being taken seriously, people who lost did not make a fuss out of it. Instead, competitors shook hands and continued to watch other games being played, whether they won or lost.

In the meantime, attendees who did not want to participate in the gaming or watch the ultimate tournament occurring on the big screen could also check out the Gigabyte stand that was set up in the corner of the auditorium. Gigabyte is a computer technology business that came out with the GeForce GTX 1070 gaming console, which consists of eyewear that allows you to see a virtual world and act within it. One of the games being played at a GeForce stand called “In Cell” required you to twist your head to direct yourself along a track and catch as many green and white viruses as possible. All while doing so, the lense-wear truly made it look like you were moving along this intergalactic track, with it even creating 3-D animations when you looked up or away from the screen.

There was also a cosplay competition at the beginning of the convention in which people flaunted their most impressive costumes. These included No-Face from Spirited Away and the horse head Internet Meme character. In the end, UCR anthropology graduate Cat Nolasco, who dressed up as Ahri, The Nine-Tailed Fox from “League of Legends,” won the contest.

With there being so much to see and participate in at Highlander Con, it was no surprise that many attendees came from other schools within and beyond the Inland Empire, many of whom had never gone to a convention at this scope before. One of these gamers was John Paul San Pablo, a third-year psychology major at San Bernardino Valley College.

“I wanted to see UCR for myself and I figured the tournament would be a good way to do that. It’s exceeded my expectations since I’m not used to (large rooms of tournament players). I’m more used to contained environments with few people in a room gaming at a time,” mused San Pablo.

Speaking from close to home, many UCR students were also glad to have this event because it opened the opportunity to meet other gamers, learn and compete within a short distance. “Having the convention come on campus was a really great opportunity and chance for everyone to get involved,” stated John Gutierrez, third-year electrical engineering major. Commenting about the influence of the convention on his gaming experience, he added, “It definitely motivated me to do better in Smash because say if I lose, I think maybe I could’ve done this or that to win. It’s a really good motivator and chance to see where you are based on your skill level.”

As it was not only an event for the expression of the love for gaming and competition but a demonstration of community, unity and the innovations yet to be uncovered, Highlander Con accomplished a myriad of goals regarding sportsmanship and respect for gaming.

And it succeeded in the numbers as well, as the team initially “expected 300-600 max and (instead had) around 2,000 people who purchased tickets to attend the event. All of our expectations were blown out of the water,” awed Troy Reed, third-year economics major and secretary of Highlander Gaming.

Let’s show the potential that UC Riverside has and that they can succeed no matter what they want to do, especially what they’re passionate about.

Considering all that it achieved in its very first convention, it’s safe to say that Highlander Con will go on to impact many passionate gamers and potential game developers to hone their craft and believe in themselves to pursue their dream career in the ever-growing department of gaming. As Wong put it best herself, “Let’s show the potential that UC Riverside has and that they can succeed no matter what they want to do, especially what they’re passionate about.” 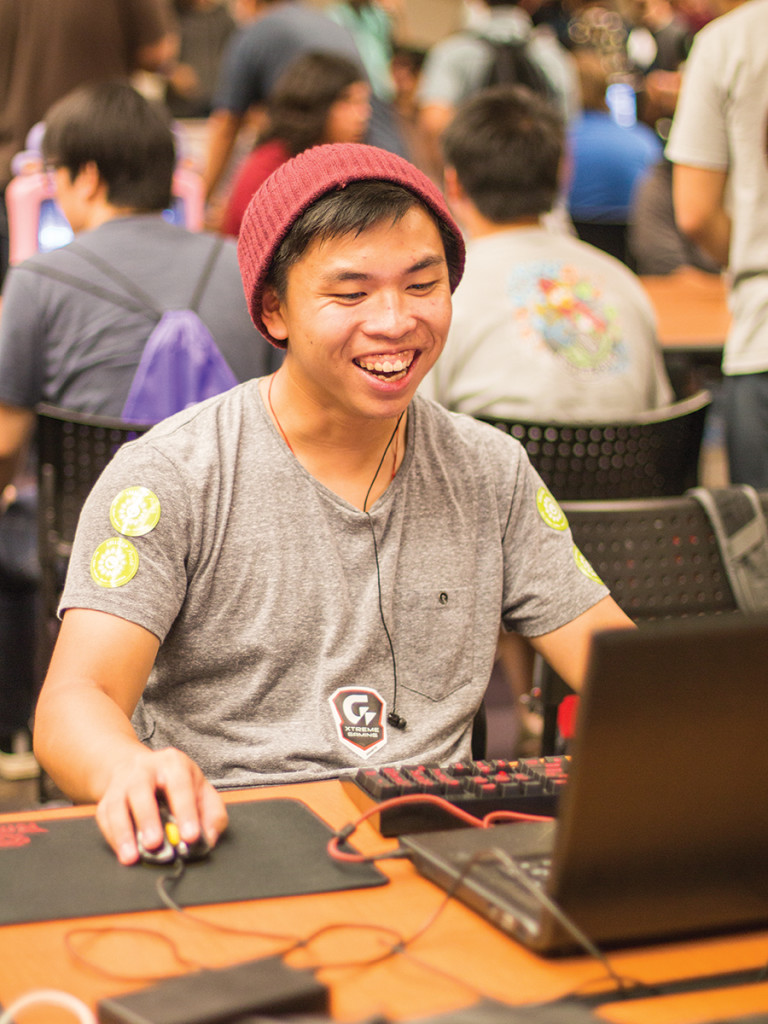