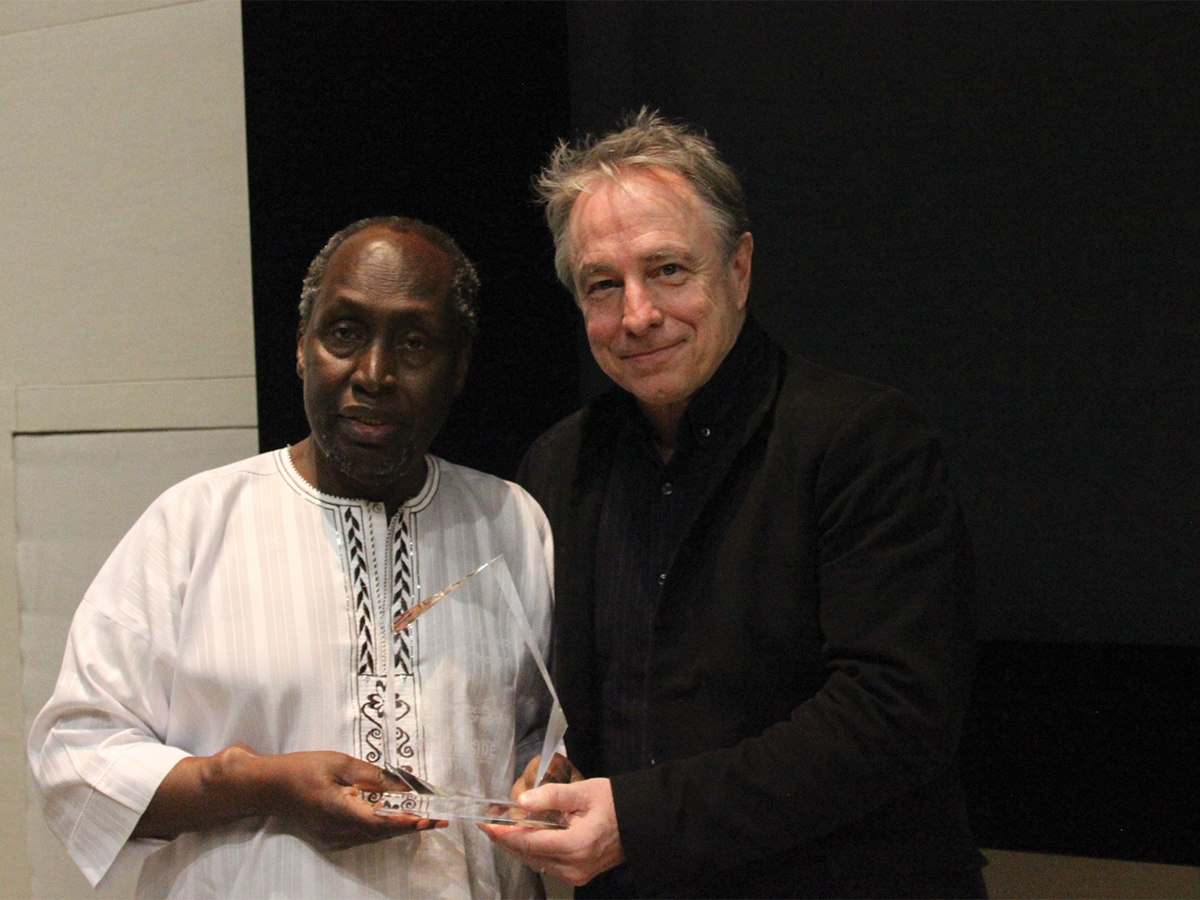 Presented every February by UC Riverside’s Department of Creative Writing, Writer’s Week brings to campus a plethora of writers, authors, poets and novelists associated with the Riverside area or UC faculty. This year marked the convention’s 40th year and it brought forth a curation of highly esteemed and acclaimed writers from Tuesday, Feb. 7 thru Thursday, Feb. 9. We attended and covered a few of the presentations and readings for this year’s event, which you’ll find below.

On the evening of the second day of Writer’s Week, former UCR professor, Dana Johnson took the podium to read from her recently published short story collection, “In the Not Quite Dark.” Born and raised around Los Angeles, Johnson’s short story collection serves as a platform for various short stories that deal with race, gender, family and blackness in the heart of her hometown. Of the short stories, she proceeded to read “She Deserves Everything She Gets,” an immediately jarring story about a mother teaching her daughter how to protect herself against rape and about going to college. Johnson read with soul and dramatic flair as she finished up her story to the applause of her fairly intimate audience. When speaking on her writing process, Johnson shared she doesn’t keep a tight schedule of when to write. “I don’t wake up at 6 a.m. by the candlelight and start writing.” In fact, her schedule is sometimes so hectic that she admitted she would sometimes write her short story when she’s waiting at the train station, much to the audience’s amusement. She continued, “Sometimes you just dive in (and start writing).” And in her case, it works beautifully to fully realize the many stories that make up the city of Los Angeles.

English Professor Fred Moten was among the many talented writers to grace the stage at the 40th annual Writer’s Week Conference. The event was intimate, filling mostly half of the screening room in INTS 1128, allowing Moten’s and the numerous other speakers’ work a certain degree of warmth to be admired.

“I don’t know what to say,” he started off with, which the crowd responded to with laughter, and immediately the atmosphere was set. He began by speaking of the peculiarity in reading his work from “The Service Porch,” the third volume in his series of poems, in a setting where he would normally serve as a professor. Odd as the context may have been, he read several of his works, many of them revisions or covers of previous writings he’d done. Though, as he acknowledged, calling them covers might not even be the best term, citing Aretha Franklin covering tracks by someone like Marvin Gaye so well that it makes the original disappear — not something he feels his covers do.

Moten’s works ranged from topics of the individual versus the ensemble and his preference for the latter, to old friends and voices heard on the bus during his days in Berkeley. There was plenty of emotion in the words he spoke, so when he spoke of the lack of synchronicity between his current self and his previous self, the one who wrote the words in a previous time and place, it came as a surprise. “They’re on the page, but not in my mouth,” he said, before reading newer works. This, paired with microphone problems which seemed to shroud his voice behind a layer of static, ironically served to add an extra layer of depth to his work.

The event was wholly unique, by turns somber, others funny, aided by Moten’s casual, friendly nature. Technical difficulties, as abundant as they were, were met with responses like, “Maybe that was God telling me to shut the fuck up,” and poems were given context with comedic anecdotes.

After the reading I had a few words with Moten (after a good dozen or so eager attendees waited in line for him to sign their books), who put my nervousness at ease when I perceived him too smart for me to engage with in conversation. Again, warm and friendly, he overlooked the technical difficulties, saying, “You can’t worry about that. It was fun, it was cool (…) (Writer’s Week) is one of the cool things here at UCR,” sharing that he is collaborating with friends on prose projects at the moment.

In a word of advice to upcoming writers in a time defined by the ubiquity of social media and connectedness, Moten suggests, “Get off social media. I don’t want to be one of those funny-nutty types (…) Just read and write, and hang out with other people who like to read and write,” before adding, “Hopefully there’s some beer and wine in there, and good food.” On a final note before leaving to pick his kids up, Moten took the time to admire his surrounding environment. “It’s a nice day.” Rightly so.

During Wednesday’s 1 p.m. session, young adult writers Lilliam Rivera and Brandy Colbert engaged in a conversation led by Rivera’s publicist, Kima Jones. Both of their works, Rivera’s debut, “The Education of Margot Sanchez” and Colbert’s upcoming novel, “Little and Lion” were read to the intimate group of 20 people who were asked to be seated closer to the writers for even more intimacy.

The conversation touched upon the concept of diversity in young adult novels and why it is important for readers of different minorities to register minority representation. “Authors and readers were fed up with the fact that they weren’t seeing themselves reflected in literature or that if they were seeing themselves reflected in literature,” expressed Colbert. “They weren’t books written by people from those backgrounds.” Rivera bounced off of Colbert’s statements by talking about the excitement for more diverse books being published, sharing, “I think what’s exciting about the moment now is that there’s more of a chance, or maybe a possibility, of having very different types of voices being heard.”

Both of their works are both diverse in their own right. With Rivera’s novel centered around a Latina in the Bronx and Colbert’s narrative about two siblings, one with a mental illness, being reunited after a year apart, the work from these two authors is just part of a growing diversity boom in the young adult genre.

Students and faculty quietly filtered into the interdisciplinary screening room on Thursday, Feb. 16 for the last few readings which would constitute the end of the 40th Annual Writer’s Week. Robin Coste Lewis, who won the National Book Award for her volume of poems, “Voyage of the Sable Venus” in 2015, read a selection of poems and passages from her work.

Many of these poems touched on a variety of themes and subjects such as death, history and identity. Born and raised in Louisiana, a number of Lewis’ poems focussed and touched on cities she visited and lived in. Speaking of Louisiana she stated, “It almost feels like another country, which is why I think I am so interested in postcolonial literature.”

Her reading consisted of five to six poems, some of which also entailed a level of audience engagement. At one point, she suggested that the audience close their eyes to experience the reading, saying, “You can all close your eyes because we are about to take a trip together.”

Overall, her reading was incredibly intimate and powerful, creating a relaxed atmosphere for all who attended.

Perhaps the most anticipated event of the week, legendary Kenyan novelist and playwright and UC Irvine faculty member Ngugi Wa Thiong’o received the LA Review of Books / UC Riverside Lifetime Achievement Award for his numerous novels, plays and essays. Arguably the most famous writer from Kenya, Wa Thiong’o’s attendance was highly anticipated. As he entered slightly late, the attendees were palpably expectant; a testament to the his stature as a world class writer.

In fact, as professor Tom Lutz, director of the LA Review of Books and organizer of the week’s festivities stated in his introductory remarks, “We are in the presence of one of the great writers in world literature.” More importantly, his relevance to African culture was also highlighted by undergraduate Robert Kotonia. Kotonia, who is also a Kenyan national, went to the same high school that Thiong’o attended in his younger years, stated, “(Ngugi Wa Thiong’o) has been the face of liberationist movements through his writings.”

As he took the stage for his acceptance speech, Wa Thiong’o thanked all those in attendance, and began discussing how he discovered his passion for writing, and where his inspiration came from. From his formative years in a colonial school, to his days in university, he discussed how his upbringing formed his interest in literature — the oral narrative traditions passed down from his family to his discovery of politics later in life. A turbulent time for liberationist politics across the third world, his sensibility was strongly shaped by the trajectory of a post-colonial Africa, decolonization and the future of a free Kenya. As he stated in his lecture, “I never realized the burden of history I carried within me,” referring to the violent legacy colonization and imperial erasure.

After presenting the award, a reception was held where individuals could get books signed and complimentary food. I was lucky enough to get a chance to speak with Wa Thiong’o after a throng of students left his side. His manner was entirely gracious and warm as we spoke about his writings, and some of his influential essays. Speaking of politics in educational settings, Wa Thiong’o stated, “The issue with education is that it can be an instrument to  normalize absurdities.” How one interprets such a profound statement is upto oneself.