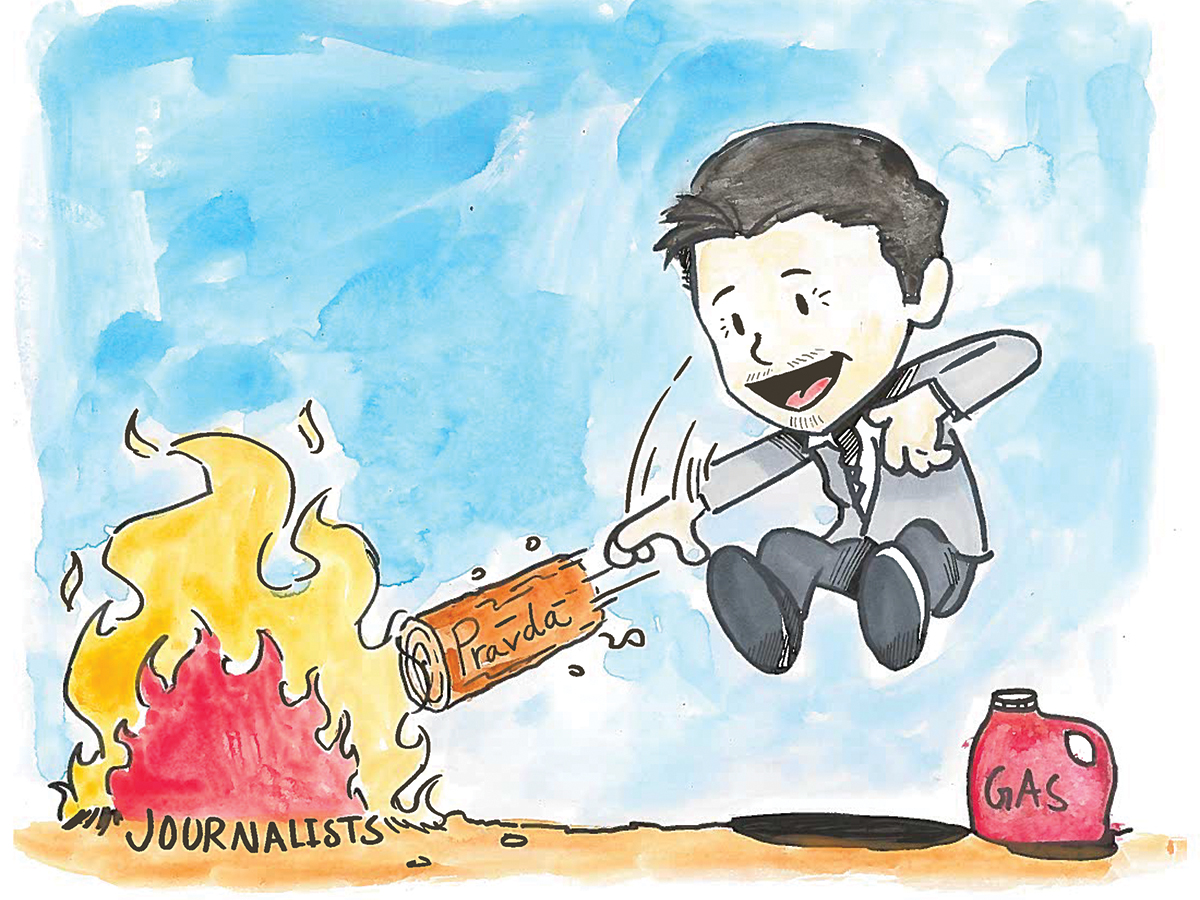 Following distasteful news coverage of the automaker Tesla’s production troubles and crashes with cars in its AutoPilot program, Tesla CEO Elon Musk attacked “big media companies” on Twitter and announced his plans to create a website that will allow the public to rate the “core truth” and “credibility” of journalists, editors and publications. As impressive as Mr. Musk’s endeavors in the private sector are, his plans to privately police journalism are nothing more than a reckless, self-serving remedy to a more nebulous and fundamental social illness than most people realize. Attempts to publicly regulate the validity of media through a rating aggregation website during a time of peak polarization in media trust will do little more than provide an additional platform for the echo chambers that plague American consciousness today.

Musk tweeted that he had registered the domain name “Pravduh” on May 25, after the Russian newspaper “Pravda”. The inspiration for this name was notorious as the primary propaganda paper in the Soviet Union; Musk’s appropriation of the term implies a tongue-in-cheek distrust of journalists as driven by ulterior motives. The tech mogul’s ire stems from a round of negative reporting that Tesla had underrepresented its worker injuries in its safety records and is producing an unusually high number of flawed parts in its production of the Model 3 Sedan.

Understandably upset at bad press, Musk tweeted that “the public no longer respects them (big media companies),” and claimed that the problem is that journalists are motivated to chase stories that will bait clicks and bring advertising revenue rather than pursue objective reporting. While Musk is correct that public trust and respect for big media companies has been declining in recent years, using these woes as a means of advancing his personal agenda against negative coverage is a shameful exploitation of a deep American crisis. His proposed solution of creating a public rating website will do little more than create another platform for increasing polarized debates and ad hominem attacks.

The journalism crisis in America begins with the fact that many media companies are under intense financial stress, and that advertising revenue is becoming more of a lifeline for reporters than it should be. These developments are linked to another transformation of the American news environment —  the death of local reporting. The Pew Research Center found that just 30 national and international news sites accounted for nearly 60 percent of all new jobs in digital journalism from 2009 to 2014, and between 2000 and 2015 print newspaper advertising revenue dropped from approximately $60 billion nationwide to just $20 billion. This digital consolidation of the media has led to the hollowing out of local and trusted sources across the country, like the Denver Post, a particularly prominent paper in the American midwest, which has been forced to lay off enormous numbers of its staff, from 250 in 2010 to less than 100 today.

In an increasingly digital world, the decline of local news crowded out by more digitized outlets is only to be expected. When news is confined to a small town or even just a single city, the number of possible readers about issues as critical as corruption in city hall or the performance of the school district is strictly defined by that area’s borders. News about nationally interesting stories however, such as national politics or reporting of any event from a more universal perspective, clearly has the potential to entice more subscribers and bring more money in through advertising revenue. In media markets, digital and broadly-focused news reporting, the type that doesn’t commit resources to local issues or write about issues from local perspectives, has been dominating the free market as a result of its wider audience base.

A Morning Consult/Politico poll found that 41 percent of registered voters trust their local news more than they trust national news. Given that local news sources are downsizing while national and digital media models are becoming more and more prominent, Americans are facing a strange paradox as they are more inclined to read, but less inclined to trust, consolidated media.

This trend of consolidation also means that large media is becoming more and more concentrated in large urban centers and becoming increasingly disconnected from the more rural and suburban heart of the country. This lack of representation for large swaths of the country, paired with systematic partisan attacks on the media as a whole, is to blame for such polarized poor public trust in the media.

The first thought that comes to mind when considering a website that will track the “core truth” and “credibility” of journalists through public ratings is a site similar to other rating aggregation sites online, like RottenTomatoes.com or RateMyProfessor.com. Considering the disappointing, but unsurprising failure of these sites to provide thoughtful, balanced perspective on the demonstrably simpler subjects of film and teaching, it’s difficult to see how any publicly accessible rating website could enhance dialogue about the perspective and truth in news reporting.

On the other hand, it is all but guaranteed that the website will be vulnerable to partisan attacks on journalists by virtue of their reporting. Journalists will be attacked by partisans when their reporting reflects poorly on a particular group, and the few journalists that already have a public reputation will similarly have their attempts at objective reporting preemptively criticized by readers that have disdain for the political reputation.

These journalistic challenges are nothing new of course, but that is exactly the problem. In a time where tribalism so heavily dominates political discourse, such a rating service would not control the fire but rather add even more kindling to an already raging inferno. The fourth estate should be accountable to the public in a functioning democracy, but it also in turn has to be fueled by public trust. In absence of this feedback loop, which is fundamentally built on thoughtful discourse that has never even seen the light of day on the anonymous forums and rating aggregations of the internet, journalism will ostensibly become an extension of political identification itself.

Restoring public trust in the media is incredibly difficult, firstly because all media should be read with a healthy dose of skepticism, but more importantly because much of the country no longer sees itself in the journalists that have come to dominate the media environment. Finding proper solutions to this crisis is a daunting task, but almost anything is better than just adding fuel to the fire.