Highlander
Home Features ASPB’s The Womxn of Tomorrow brings together activists for a conversation about... 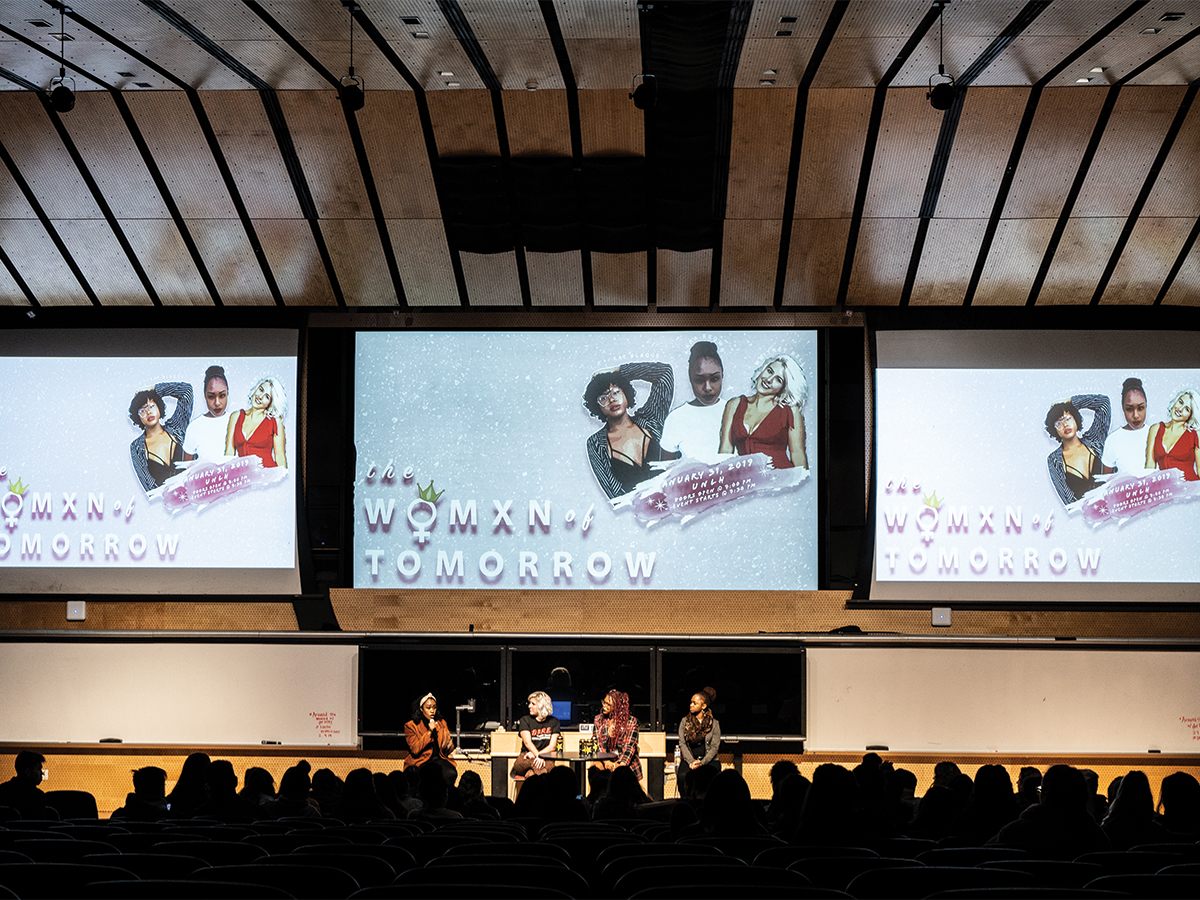 On Thursday, Jan. 31, the Associated Students Program Board (ASPB), in collaboration with the Women’s Resource Center, LGBTQ Resource Center, The WELL, and African Student Programs, hosted “The Womxn of Tomorrow” in the University Lecture Hall 1000. The program featured a panel of women in the entertainment industry.  Kara Brown, one of the featured panelists, is a staff writer for the television series “Grown-ish” and is also a contributor to Shondaland.com. Another featured panelist was public speaker and social justice advocate Whitney Bell.  Bell is known for her contributions to Teen Vogue, in which she has discussed mental health activism and abortion. Kat Blaque, a transgender African-American YouTuber, was also among the panel.  Within her platform, Blaque discusses important issues relating to sexual assault, black culture and transphobia. Jacquelynn Thomas, Assistant Director of Engagement in Residential Life at UCR, was the moderator for the discussion. In addition to hosting a panel, free giveaways, including sleep kits with eye masks and ear plugs, were available to spectators as they walked to their seats. Though the turnout was low, the crowd was enthusiastic to be there.

When asked to define feminism, Blaque discussed the importance of fighting gender oppression. Bell added on to this point by pointing out the privilege that white women have in terms of feminism and the importance of stepping aside for women of color, namely black women, since Bell considers their issues more important.

In terms of role models, Brown stated that instead of a particular person, her role models are women in life “getting stuff done.” “I can’t say I have a role model because people are going to disappoint you,” Blaque said.

On the topic of learning more about subjects such as feminism and issues concerning the transgender community, Brown pointed out the importance of reading as a basis of knowledge, stating,  “You just can’t know things without reading.” She also discussed how many people will claim to be experts or have knowledge about certain topics without actually reading about them. Blaque pointed out the ease of accessibility to the works of advocate and scholar Kimberlé Crenshaw, and also critiqued the ways in which intersectionality has been used.

Brown discussed how some of the first people to hire her were also women. “If you’re in a position of power to hire women, do it,” Brown said. She highlighted the importance of the imbalance of the power system in multiple industries and how women supporting other women could help make strides in terms of gender equality in the workplace. Blaque pointed out how feminism in academia is not available to the average person due to the cost of accessing such scholarly articles.

On the importance of standing up for women, Bell answered the question with a captivating sentence: “Because no one else is going to.”  Brown pointed out that “you lose nothing by asking for equality.” She used the contract agreement Jessica Chastain has with Octavia Spencer in which it states both women must be paid equally as an example.

Blaque emphasized the importance of not letting opponents intimidate students from fighting for what is right. “Just do it because you know that it needs to happen,” Blaque stated.

Bell discussed the importance of using one’s voice to share their perspective and experience and meet each other with compassion, especially coming from a point of privilege. She also said that even though it may be difficult to speak out due to potential harassment and threats, it should still be done. “If I crawl back into a hole and let them stop me, who would that be serving? Nobody,” Bell explained. Brown discussed how she uses her platform for stories that she wants in order to give more representation and to also give a voice to others.

After an engaging panel, the first 10 students that were present in the line outside of UNLH were able to end the lecture with a meet-and-greet with the panel.