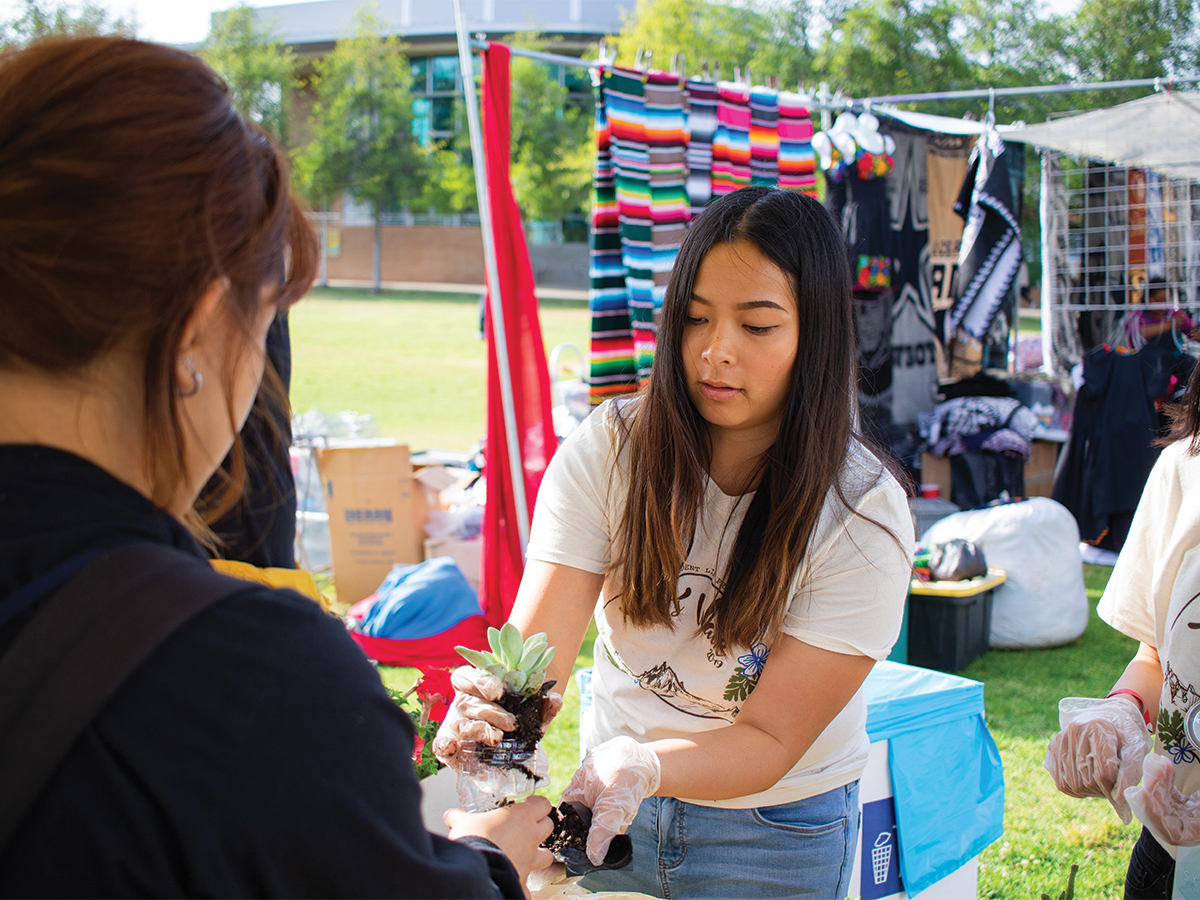 ASPB hosted its annual Arts Walk event last Wednesday, May 1, “an annual interactive arts showcase” for students to share their artistic creations, according to their Highlander Link page.

The event consisted of several booths aimed at providing “interactive arts;” students lined up at the Wax Creation station to make wax molds of their hands, and the “Stuff-a-Stuff” booth to stuff and sew up their own stuffed animals. There was also the Bubblemania section, where passersby could blow bubbles twice as big as their head, if they didn’t pop before coming off the bubble wands.

The main focus of the event, however, was the Art Installation booth, where student-artists on campus showcased their various works of art, from koi fish on a canvas made with paint and foil to a yard-high, plexiglass-encased, artistic rendition of what may have been a severed rhinoceros tusk or unicorn horn. Some of the displayed artworks were photographs, such as a series of underwater photos, or landscape photos of a sunset or a woman on the beach.

Several of the pieces were unattributed, but some of the artists whose work was featured, who requested anonymity, told the Highlander that their name was absent even though they submitted it alongside their work, while another said that their work was attributed to the wrong person.

Under the installation tent, there were also two student vendors, one of which was Elizabeth Chu, a first-year political science and administrative studies major, selling earrings that she had crafted by hand. She mentioned that she began selling jewelry back in eighth grade, mainly bracelets for charity, first for breast cancer and later for wells in Uganda. It was in her senior year of high school that she began making earrings. Every piece of jewelry she makes is made to order, and Chu finds merit to doing so. “I definitely think there is beauty in uniqueness and choosing something because YOU genuinely like it, not because it’s easily accessible or worn by everyone else like the kind of jewelry you get at places like Forever 21,” Chu wrote.

Another vendor at the installation tent was Gabriela Molina, a first-year studio arts major, showcasing paintings influenced by Mexican artists and the Marvel franchise. She said that her “calavera (skeleton)” paintings were inspired by Mexican artists Frida Kahlo and Diego Rivera and are her most popular works.

Molina wrote that she attended an art program for children at Bell Arts Factory (BAF), an art center in Ventura, California, and spent nine years in the program, until she was 14. She continued her work in art through high school and eventually was asked to be a guest studio artist in May 2018, until she entered UCR in the fall of 2018. She then held her first solo art show, “Yo Soy De Adonde Voy (I Am From Where I Am Going),” as a featured artist for the Factory at the Ventura County Art Walk later in October.

As a Mexican-American, alongside Mexican artists, Molina’s art also takes inspiration from Spanish novels and Marvel comic book characters. “It’s heartwarming to get to know UCR students I would have never encountered if it hadn’t been for this vending opportunity,” she said, “as well as receiving support in the form of compliments, advice, or financial support by purchasing my art.”

Another highlight of the Arts Walk was the Bell Tower performances, one of which was done by members of the “All That Jazz” musical theatre group at UCR, a recently established group created during Week 0 of the Spring 2019 quarter that focuses on all art forms including acting and dancing. Aryana Santos, a student and creator of All That Jazz, performed on-stage herself with a cover of “I Won’t Say I’m in Love” from the movie “Hercules” by Disney.

“All That Jazz was ultimately my vision,” Santos wrote. “I realized that there weren’t as many musical theatre opportunities on campus as students would like. That being said, I began brainstorming on what a club like this would aspire to be.”

Other singing acts at the Bell Tower were performed by HoBeeDeeSheBop, a guitar and drums duo of “soothing beats;” Delfino^2, an alternative band that plans on making it big according to lead vocalist Christian Duran; Bruto, a solo guitarist who sang about heartbreak and mental health; G. Bautista, a solo vocalist of R&B influences and Not So Sharp, an acapella group at UCR.

Dancing was also performed on stage by Dancesport, an on-campus Latin and Ballroom dance-based group, and the Oceania Dance group, alongside comedy acts by the female-based comedy campus group Girls Ganq, poetry by UCR’s Mosaic Art and Literary Journal and spoken word by The Verbal Coliseum.

The Arts Walk concluded at 8 p.m. after every act had performed at the Bell Tower.