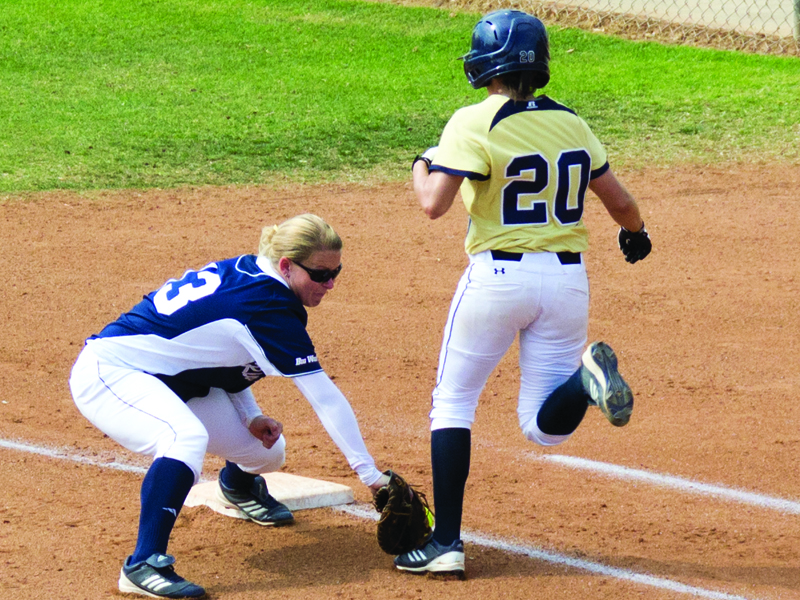 On Friday afternoon, the UC Riverside softball team opened it’s 2013 season with a 10-2 victory over Southern Mississippi at the Fresno State Kickoff tournament. It was UC Riverside’s first opening day win in over five years.

The Golden Eagles (1-3) struck first at the top of the third inning as Morgan McKeever cleared the bases with a one-out single up the middle allowing two runners to score. Riverside responded, however, racking up seven runs at the bottom of that frame to lead 7-2.

Nicollete Lujan started the blue and gold charge with a walk to leadoff the inning. Kayla White singled to left field and Ariel Shore reached on an error, allowing Lujan to cross the plate for Riverside.

Another Highlander score prompted a Mississippi pitching change, but it didn’t stop the momentum as UCR continued to tee off on pitches. A pair of two-run singles from Brittanie Akey and Meagan Esteban allowed Riverside to take their largest lead of the day, 7-2.

UCR added their eighth run in the next inning as Shore got a leadoff triple and scored on a sacrifice fly. In the sixth, UCR chipped in two more to enact the eight-run mercy rule and end the game at 10-2.

Friday’s triumph was the first career win for head coach Linda Garza, who took over the team last summer.

The UC Riverside softball team (1-1) finished the last game of their double-header Friday afternoon against the Fresno State Bulldogs (2-0). The lady Highlanders came up short as the home team engineered a six run inning en route to a 7-3 triumph.

Looking to earn their first victory over Fresno State since 2002, UCR drew first blood with a single run in the top of the third inning. It would prove to be the first and last lead for the blue and gold as the Bulldogs countered with six runs in the next inning.

The home team took a 2-1 lead behind a Highlander mistake before a wild pitch brought in another runner increasing the deficit to two, 1-3. Two more singles saw three Bulldogs cross the plate as the lead stretched to 6-1.

The Highlanders rebounded with RBI singles from Dionne Anderson and Ashley Ercolano narrowed Fresno State’s lead to 6-3. Another Fresno run at the top of the sixth, however, made it a 7-3 ballgame. UCR failed to move a runner into scoring position in the seventh inning giving Fresno State their second victory of the day, 7-3.

Errors proved costly as the Highlanders committed five compared to the Bulldogs’ one. Pitcher Ercolano took the loss for Riverside as she allowed six hits and seven runs in 5.2 innings. Kayla White was the only bright spot for Riverside as she batted 4-4 with two runs.

The Highlanders (2-1) broke the hearts of the Sacramento State Hornets as UCR withstood late game pressure to pull out a 2-1 win.

Sacramento (2-1) got on the board first, scoring one unearned run in the second inning to lead 1-0. The Hornets had the bases loaded and no outs, but could only convert the single run.
Riverside punished the missed opportunities as they scored two runs at the top of the next inning. A pair of singles drilled up the middle, including an RBI single by Alexis Pickett, gave the Highlanders a 2-1 advantage.

Sacramento State offered resistance in the sixth inning with two outs and bases loaded, but the lead runner was called out after attempting to steal home. The Highlanders allowed a base runner at the bottom of the seventh, but closed out the inning to earn their second victory of the weekend, 2-1.

On the mound Alyssa Razo nabbed the win for Riverside, giving up five hits and one unearned in seven innings. Balanced offense was key for UCR as eight different players tallied at least one hit in the game.

The UCR softball team Saturday night clashed against UTEP but was pounced on by the Miners en route to a 1-9 thrashing.

Playing their fourth game of the weekend, the Highlanders (2-2) gave up a run early as UTEP scored in the first inning. Kayla White responded by belting a home run to lead off the bottom of the opening inning as Riverside knotted the score at one apiece.

White’s homer would prove to be the only jovial moment for the Highlanders as UCR remained scoreless for the rest of the game. The Miners added to their lead, scoring two runs in the fourth, three in the fifth, and three in the sixth to lead 9-1.

The three runs scored in the fifth were unearned when the Highlanders committed two errors in the inning. UCR got a base runner at the bottom of the sixth, but could not convert as the Miners won in six innings courtesy of the eight-run mercy rule.

Riverside only achieved two hits in the entire game as the University of Texas at El Paso reached double digits (10). Outside of White’s home run, the only other player to connect on a hit was Ariel Shore, who went 1-3 at bat. Taylor Alvarez started the mound for the Highlanders as she allowed three runs and six hits in 3.2 innings. Ashley Ercolano came in to save Riverside but gave up four hits and six runs in the remaining 2.1 innings.

The loss was Riverside’s first to UTEP in three meetings.

In the final day of the Fresno State Tournament, UCR took on UTEP once again in hopes of reversing the result of the previous night. Lady Luck wasn’t on the Highlanders side as they fell to the Miners 3-5 after leading for the majority of the contest.

The Highlanders (2-3) scratched first as a wild pitch from the Miners saw Ariel Shore slide into home, giving Riverside a 1-0 lead. With two on base Kayla White drilled a single up the middle allowing Marissa Escalante to run in for another score in the second inning as UC Riverside stretched the lead to 2-0.

At the bottom of the frame UTEP (2-3) finally got on the board as a Highlander throwing error resulted in an unearned run for the Miners, 2-1. Both teams went scoreless in the third and fourth innings as the teams only connected on one hit combined.

Riverside took their largest lead of the game at the top of the fifth as an Escalante single to right field resulted in a Dionne Anderson score, giving the Highlanders a 3-1 advantage. The Miners, however, responded with an offensive surge in the bottom of that frame. With the bases loaded Ashley Collazo stepped up to the plate and smacked a single to right field resulting in two runs and a tied score at 3-3. Riverside came up dry in sixth inning before two more runs by UTEP sealed the contest, 5-3 in seven innings.

It was the Highlanders’ third loss in five games. They next travel to San Diego, Calif. to compete in the Campbell/Cartier Classic on Feb. 15.