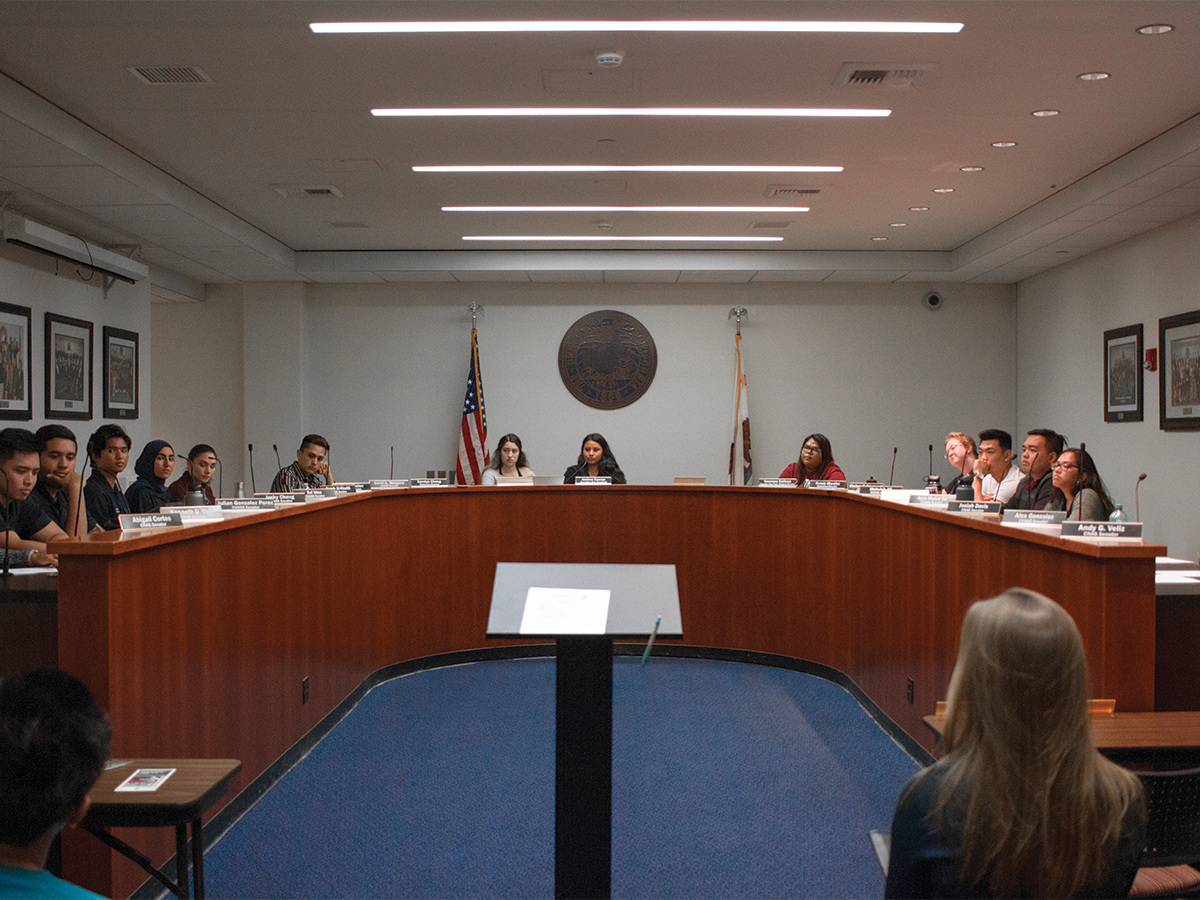 On Wednesday, Dec. 2, ASUCR held their last State of the Association (SOTA) meeting of the quarter and unanimously passed seven pieces of legislation regarding Greek life, providing resources to students while classes are online and amending the ASUCR constitution.

The meeting started with SR-F20-006 ASUCR Stands in Solidarity Against Sexual Violence Recognizing its Prevalence within Greek Life Communities which was authored by members of the office of Campus Internal Affairs along with SPP Senator Nava Majlessi. The senate resolution was authored in light of a recent Twitter thread created by UCR Alumna Erin Spate, in which survivors shared personal anecdotes of their experiences, many of them referring to UCR Greek life. The resolution stated that while ASUCR recognizes that not all Greek life members promote a culture of sexism, research has shown that fraternity men are three times more likely to commit acts of sexual assault than other college men, and women in sororities are 74% more likely to experience rape than other college women. The senate resolution also addressed a statement published on the Interfraternity Council (IFC) of UCR’s Instagram page which stated that systemic changes would be implemented in the organization and another by the UCR Panhellenic Association that sexual violence training would be implemented for the 2020-2021 school year. Not all recognized Greek life chapters, however, have implemented such training, according to the senate resolution. With the approval of SR-F20-006, ASUCR declared their support to include mandatory sexual assualt and consent training for Greek life, encourage Greek life chapters to become active participants of Campus Advocacy, Resources & Education’s (CARE) Brothers & Sisters Against Violence program, as well as support survivors of sexual violence by “committing itself to fully endorsing its solidarity against sexual violence on campus, and specifically within Greek life communities.” Majlesi stated that they were unable to get IFC and the UCR Panhellenic Association to sign off on the resolution, as their email inquiries were left unanswered but are choosing to move forward with it otherwise.

SR-F20-008 Proposition to Make Live Participation and Attendance Non-Mandatory, authored by CNAS Senator Barry Liu, CHASS Senator Mufida Assaf and CNAS Senator Lina Nguy, outlined their proposition to make live participation and attendance optional for online classes amidst the virtual winter quarter coming up, mainly to assist international students living in different time zones. The resolution states that students may be hindered by attending their classes due to “familial obligations, work obligations, mental and physical health and disabilities.” The resolution aims to have all professors adhere to providing alternative ways for students to receive participation credit, whether that be through supplemental assignments or extra credit opportunities and to provide at least a 24-hour window for students to take final examinations. With the approval of SR-F20-008, ASUCR will present the resolution to the Academic Senate and get in contact with the dean of each college to further discuss this policy. They will also work with the campus Student Disability Resource Center (SDRC) to discuss best practices when it comes to their individual teaching and learning styles.

SR-F20-009 Proposition to Mandate Syllabus Resources was presented by CNAS Senator Akanksha Sancheti and it acknowledged that students with disabilities have experienced more COVID-19 related adversities than their peers without disabilities or health concerns, according to a study conducted by Cornell University and the University of Washington. SR-F20-009 intends to advocate for a statement to be included in every professor’s course syllabus that includes resources for students such as the SDRC, and UCR’s 24/7  COVID Wellness Hotline.

SB-F20-013 Amendment to Include Two Additional Positions under the VP of Finance Office was presented by Vice President of Finance William Wang and it includes the implementation of his office’s event coordinator and social media manager positions. The bill outlines the duties and responsibilities of each new position as his office tries to expand their outreach to students and provide educational events surrounding financial literacy, stated Wang.

Finally, SB-F20-014 Removal of Chapter 38 and Amendments to Chapter 16 intended to update a chapter regarding the Transfer Non-traditional student taskforce in the ASUCR Constitution that had not been updated since 2015.

During Officer Reports, ASUCR President Luis Huerta, VP of Campus Internal Affairs Angelica Garcia, VP of Finance William Wang, VP of External Affairs Vincent Rasso and Personnel Director Sean Nguyen gave updates on the status of their respective offices in terms of meetings that they have and their plans for the upcoming winter quarter. Rasso stated that his office is currently working with all nine UC undergraduate campuses to prepare four statewide campaigns advocating for critical issues. Fund the UC centers around doubling the federal funding for the Pell Grant and expanding eligibility for undocumented students to recieve financial aid. Racial Justice Now is focused on defunding the UCPD and reinvesting that funding into students. ACQUIRE intends to secure an equitable COVID-19 response on campus. UCweVOTE is intended to build campus vote coalitions across the state.

Before the end of the meeting, Elections Director Lama Yassin announced that her team is currently planning for the upcoming ASUCR Elections in spring and they are searching for ways to engage with students through surveys, social media and through town halls they are planning for the winter quarter.