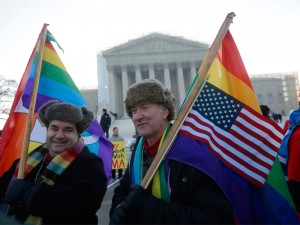 The potential dismissal of Proposition 8 cannot be taken lightly since it affects everyone living in the state of California. It may seem that the issues behind same-sex marriage only concern those who consider themselves part of the LGBTQ community, but this controversial issue stirs up emotions with everyone despite their sexual orientation. Now the Supreme Court has taken up the case, but there is the threat that Proposition 8 will be placed on the backburner. The Supreme Court needs to take into consideration marriage equality and not limit it based on the opinion of the majority from four years ago.

The recent issues regarding the technicalities and the potential dismissal of Proposition 8 reveal that the struggle is between allowing the entire state to grant gay marriage or only the Los Angeles and Alemeda counties, where the suit was filed in court. Many argue that U.S. District Judge Vaughn R. Walker’s ruling affects all of California because it ordered officials to stop enforcing Proposition 8 at the state level.

Conversely, Vikram Amar says, “Walker’s order would be limited because the suit was filed on behalf of two couples, not all gay couples.” While both are reasonable but opposing points, whether Proposition 8 is dismissed or not the entire state of California should be included under the jurisdiction. California is among the states in which the most gay couples reside. Because California has a high population of homosexual couples, it is especially important to address California as a whole on the potential dismissal of Proposition 8.

The move away from traditional marriage between a man and a woman is pushing the buttons of conservatives. However, someone’s sexuality should not determine whether they are allowed to marry or not. It does not matter what sex, gender, race, ethnicity or color anyone is, everyone should be entitled to the same rights and should be treated fairly. Laws are designed to protect people but marriage between people of the same sex does not threaten anyone’s safety.

Marriage is about love and being with someone you want to spend your life with. It is about the union of two people who love and care about each other enough to commit to stay together for the rest of their lives. Marriage is an expression of love that two people feel toward each other.

Simma Lieberman says that she and her partner, Sandra Brown, were to lead a normal life regardless of their homosexual relationship. The two loved each other and were together for 18 years. They also had a son who “had two moms who loved him.” Even though Brown passed away from a sudden heart attack, they are an example of the bonds between two people of the same sex.

Prohibiting same-sex marriage takes away the gay community’s right to marry. It is unfair to forbid anyone to be with the person they desire based on his or her sexuality. Doing so is unconstitutional because it allows some people to express their love for one another publicly while the LGBTQ community is forced to express their love for each other privately. As if this is not enough, it is important to point out that since homosexual couples cannot marry, they do not get the same benefits that heterosexual couples do.

As in Lieberman’s case, when she tried making decisions regarding her deceased partner, her input was not taken into consideration. She was appalled when she realized that the 18 years spent with her partner “in the eyes of the law … had no legitimacy.” It is ridiculous that the law allows people who have been married for far less time than Lieberman and Brown to make decisions about their partner’s health but does not consider a gay couple’s union to be legitimate.

It is not logical to apply a set of rules to only the counties from which the gay couples have sued from. The Supreme Court cannot make exceptions for certain people or counties and expect the rest of the state be content with its decision. Proposition 8 is prohibiting a minority the right to be legally recognized as married couples because of the beliefs the majority held four years ago. Now 61 percent of Californians support gay marriage and the law should change to reflect the change in opinion.

When looking at the big picture, in circumstances like that of gay marriage, it is impossible to please everyone. Therefore it can be effective if the Supreme Court considered looking at current opinions for and against Proposition 8 before making its decision. Even though California voted in favor of Proposition 8 four years ago, the tide has changed and the Supreme Court’s decision should be based on this increase in support.

Allowing only certain counties to legalize gay marriage would only result in turmoil. It would cause people to question the reasoning behind allowing only some counties to perform same-sex marriages instead of the whole state.

If two counties in California were to legalize gay marriage, there could be a huge influx of homosexual couples into Los Angeles and Alameda counties. If only certain counties were allowed to legalize same-sex marriage there could be a large increase in the number of people in that county leaving to make accommodations. Large population shifts may create future problems for the county in its administration.

There are various perspectives in which this situation can be looked at. The most convenient solution would be to decide on the option that would satisfy the most people. Ultimately, laws and regulations are established in order to protect, to make living easier and to make the world a better place.

Allowing sex-same marriage would result in the happiness of the gay community and would not affect the lives of those who do not approve of it. Those in opposition to gay marriage should not be affected by the decision that two people want to be bound by the laws of marriage. There is no need to restrict the LBGTQ community from the ability to marry one another because of the belief system of others. Unless gay marriages are placing people in physical danger, there is no reason to abolish it.