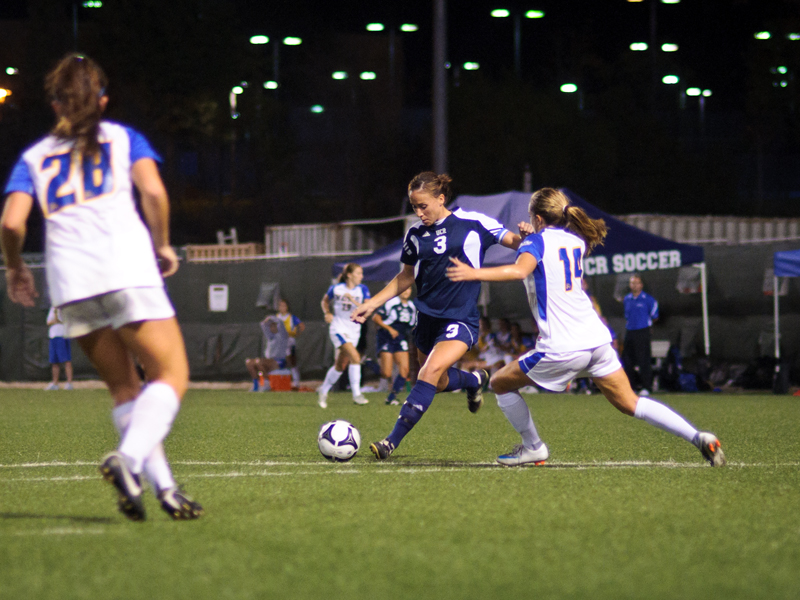 The women’s soccer team goes into Big West play with some shaky results as the club dropped two home games versus Tulsa and Gonzaga this past week. In both games the lone scores came in the first half, but UC Riverside could not respond. They remain winless at home and are currently riding a three-game losing streak into Big West Conference play.

The game versus Tulsa on Sept. 22 was tightly contested as the Highlanders outshot the Golden Hurricane 16-5, but couldn’t muster a shot past Tulsa goalkeeper Hayley Harryman. Highlander forward Tyler Cunningham and midfielder Alexa Bustamante tied for the team lead in shots while Cunningham and midfielder Amber Marani tied for most shots on goal with two apiece. The deciding goal came at the 23-minute mark of the first half as Brandi Hinch drove the ball down the field and slipped the ball past Riverside goalkeeper Elizabeth Silas from 15 feet out.

The score was Hinch’s fifth goal of the season and ninth of her collegiate career. UC Riverside had a 5-2 lead in shots on goal. Riverside also won the corner kick battle (4-1), but couldn’t convert on any of their midfield chances. Tulsa only led in one major statistical category for the game with five saves compared to the Highlanders’ one. Harryman logged all 90 minutes for Tulsa while tallying four saves for the game. Silas recorded one save for the contest while playing all goal minutes. The 1-0 win pushed Tulsa’s record to 6-3 and was their fifth shutout of the year while the Highlanders fell to 3-6-1 overall for the season.

While many students were enjoying all the festivities of Block Party on Sept. 27, the women’s soccer team competed against Gonzaga with hopes of retaining their first home victory of the season. The Highlanders, however, couldn’t overcome an early deficit and lost 0-1. This time the singular score of the game came at the 22-minute mark, and once again came off of a goal kick.

After recovering from a sluggish 5-8 hitting first half, the Highlanders picked up their offense, outshooting Gonzaga 7-4 in the second half. Riverside forced Gonzaga to ward off multiple corner kicks as well as other close shot attempts. However, they couldn’t find the back of the net during the closing possessions of the game despite holding an 8-3 edge in corner kicks. Bulldog goalkeeper Christie Tombari recorded five saves for the game while forward Karley Baggerly secured her second goal of the season. Goalkeeper Silas tallied five saves for the Highlanders while playing all 90 minutes for the home team. Gonzaga improved to 4-4-1 on the season and picked up their first road victory.

The loss was the Highlanders’ seventh shutout this season and was their 10th defeat of eleven games that have been decided by two or fewer goals. UCR, however, has been on the wrong end of games more often than not. UC Riverside has a 3-7-1 record going into their Big West conference matchups next week, starting with a Friday night matchup at home against California State Northridge on Oct. 4.