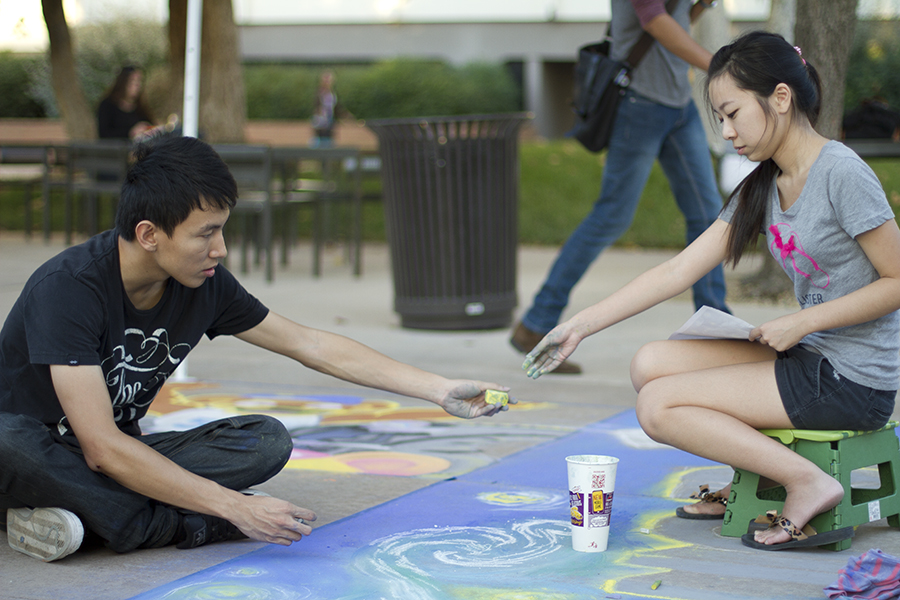 My normal stroll from Coffee Bean to Rivera was interrupted with awesomeness this week by The HUB’s annual Chalk The Walk, Welcome Week Edition. From Sept. 30 to Oct. 2, scenes of Highlander pride stretched across the HUB’s upper patio, starring Scotty, the Bell Tower and a whole lot of creativity. None of us are strangers to the stress of week one; from buying overpriced books to finding classrooms you never knew existed. What better way to deal with the stress than with an artistic respite? The showcase, known for enlivening campus during its end-of-the-year drudge, made a special appearance this fall to generate school spirit in a fun and creative way.

The walkway was covered with etchings of familiar buildings and pop culture references while the artists themselves were covered in colored chalk. As passers-by stopped to admire and pick out their favorite scenes, participants were able to work at their own pace, starting and completing their projects whenever convenient. HUB Student Planner Katrina Honer photographed the pieces while Student Affairs judges weighed the competition.

A popular theme for this edition was “Great Works with Scotty,” where the beloved mascot was placed into masterpieces. Scotty appeared in student versions of the “Mona Lisa” and “The Scream,” just to name a few. Others chose the “Greetings From UCR” theme, drawing postcard-like images of scenery from around campus. These included impressive, photo-esque depictions of recognizable campus buildings like the Bell Tower and our famous arches in front of the Rivera Library. The “Whose Side? R’Side!”-themed pieces ranged in image and style but all shared the same concept of Highlander pride. Students choosing this category sketched Scotty lifting weights in the Sports and Recreation Center and creative two-way lettering declaring true Highlander spirit.

The mastermind behind the depiction of Scotty as Austin Powers, Tara Ravanbach, seemed to enjoy the creative outlet so early on in the year. Outfitted in her snapback and headphones, the second-year business major talked about participating in the event on a whim, stating, “Why not? It’s for fun! I get a chance to express myself on the sidewalk of UCR.”

Another “Great Works with Scotty”-themed piece was done by second-year Mary Daou, depicting Scotty as Adam in a hilarious remake of Michelangelo’s “The Creation of Adam.” Although undeclared and hoping to major in art, Daou recognized the effort to get students from all fields involved, saying, “It’s a cool opportunity for everyone to get together and do something different. Be spontaneous!”

The pieces were judged on completion, technique, visual interest, originality/imitation and overall opinion. The winners of each theme were announced at Wednesday’s Nooner hosted by ASPB. Michael M., Emily K. and Alice D. won Best Piece in their respective categories, with Alice D. also winning Best in Show. Each winner received a $50 customizable gift card, and Best in Show received a $100 gift card.

An idea suggested by Dean of Students Susan Allen Ortega, Chalk the Walk Welcome Week Edition provided a way for students to tap into their Highlander pride with the new year. Not only did this special edition rev up campus for a fresh school year, it also allowed students who aren’t necessarily artists to participate in the fun. HUB Student Planner Brennan Zebra assured that anyone can sign up and reserve a spot. “We open it up to everyone and have never had a problem with only art students participating. The judges aren’t artists. We always use judges from Student Affairs because they’re in tune with the students and always enjoy helping them have a good time.”

The HUB administration proved that the formula for increasing Highlander spirit only takes a little imagination and a few sticks of chalk. And to any Highlander that wanted to participate and did not get the chance to do so, they’ll have another opportunity later this year. This event usually takes place during spring quarter when many students get a chance to bring out their inner artist. Although the Welcome Week edition was focused on Highlander pride-based themes, the spring quarter edition will provide a broader range of topics to choose from. “We will still be having the event in the spring, and our categories are flexible and open for students” said Zebra. Color and creativity were abound this week at UCR, and it’s only a matter of time until once again Chalk the Walk comes around the block.