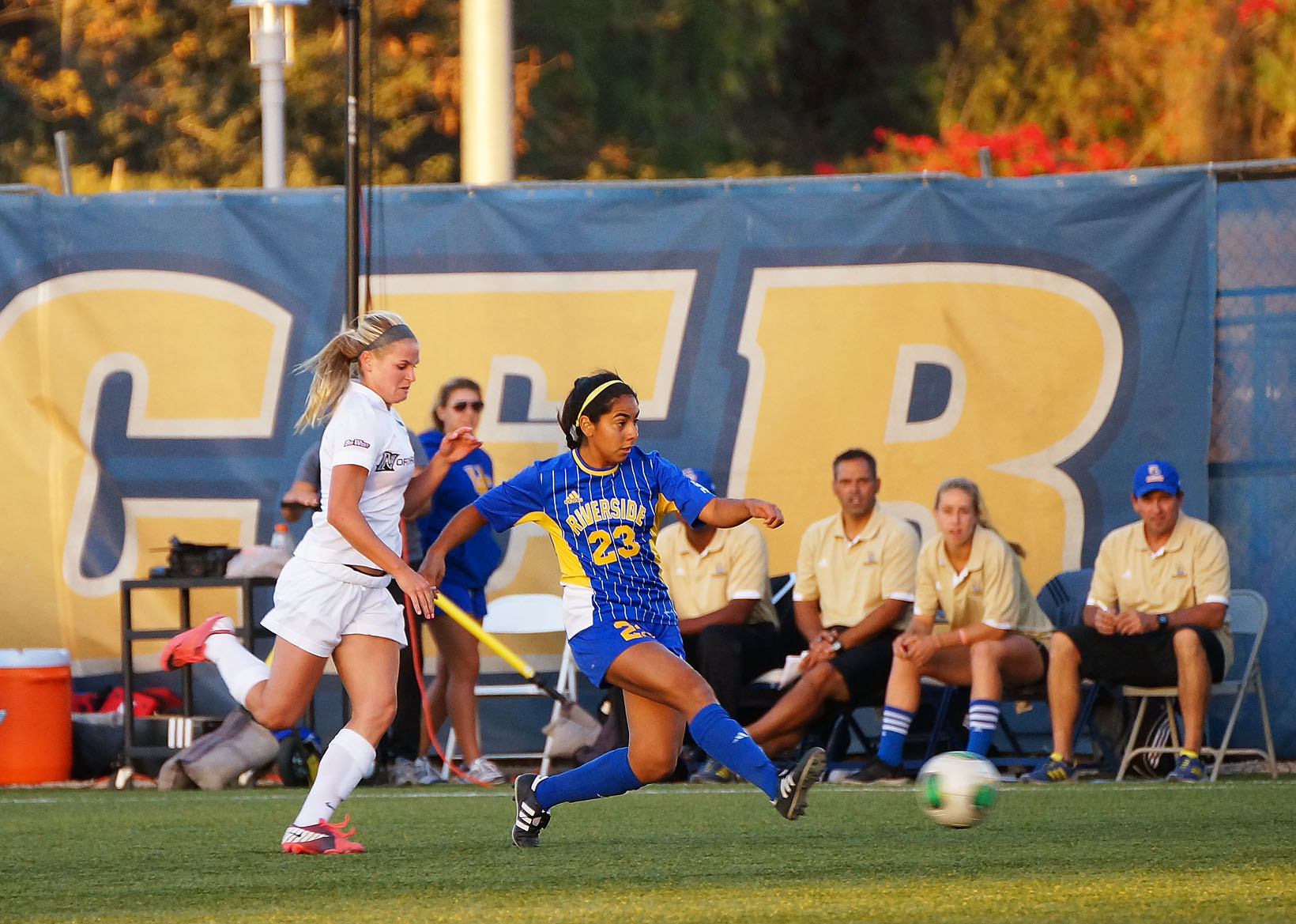 Two second-half goals for the UC Riverside women’s soccer team pushed them toward their second straight win in Big West conference play this season when they took on the Hawaii Rainbow Wahine. The win marks a significant milestone for the team, as it is their first time starting 2-0 in conference play in eight years.

Hawaii found themselves in total control throughout the first half, with eight shots and three shots on goal compared to UCR’s three shots, none on goal.

In the 43rd minute, Hawaii was able to break through the resilient Highlander defense for what seemed to be a score. However, the goal was wiped out on an offsides penalty, leaving the match scoreless going into halftime.

Just as Hawaii controlled the first half, the second half belonged to UC Riverside, who scored the first goal of the game off a penalty kick conversion by Tyler Cunningham, who was given the opportunity thanks to a hand ball in the penalty box by the Rainbow Wahine.

UCR added an insurance goal to increase their lead to 2-0 in the 79th minute, when the Rainbow Wahine attempted to clear the ball out of their defensive zone. However, the ball ended up with Highlander Kaitlin Anzalone, who put the ball in the back of the net from 27 yards out. Anzalone’s score would be the final one of the match, allowing the Highlanders to secure their second straight conference victory.

Head coach Nat Gonzalez believes the team has been “competing hard, and doing a good job of putting ourselves in position to win” and believes his squad is “right there with every other team in the Big West conference, we just need to keep pushing forward.”

The first score for the Anteaters came near the end of the first half, when Jasmine Nickelberry’s corner kick found Natalia Ledezma for the score in the 42nd minute.

It didn’t take much longer for UC Irvine to score again. On a breakaway, Nickelberry once again found a teammate, Bianca Frontino, for a goal that would put UCI up 2-0 just before the first half.

UC Irvine’s defense put on a rather fine performance, one in which the Highlanders were unable to find rhythm on offense, registering just four shots during the entire match. It was also a match in which UCI goalie Tobin Corey might as well have been in a reclining lawn chair with popcorn in hand, as only two UCR shots were on goal, both of which were easily dispatched by Corey.

Despite the loss, freshman Sammy Arellano believes the team will bounce back. “I think we’ve just been unlucky, because I think we have the potential, we’re all great players, and I believe our time is coming because we’ve been working really hard.” Arellano also emphasized camaraderie, stating that the team needs to “stick together and not let the little things break us.”

The Highlanders hope to regroup and right the ship in their next match against UC Santa Barbara on Oct. 18.