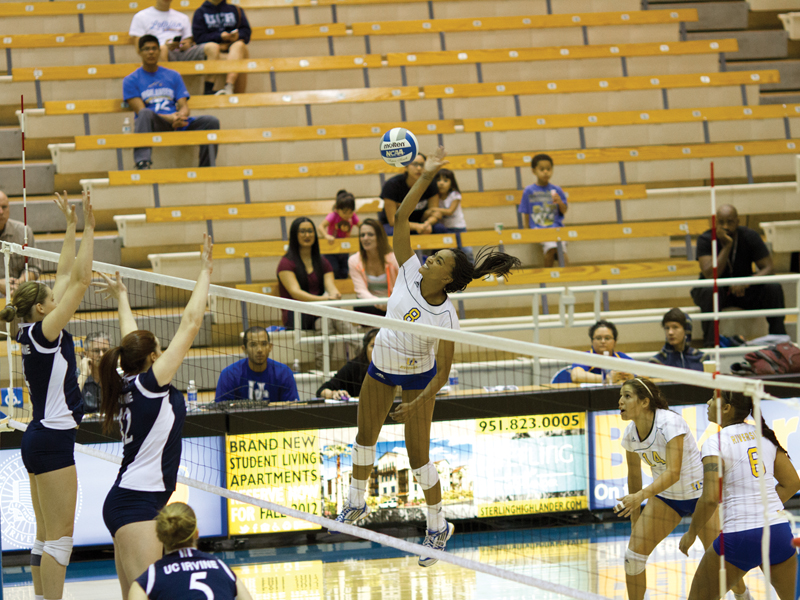 In the first set, UC Riverside tied the score five times with the help of sophomore Ashley Cox’s seven kills and freshman Nae Bender’s 14 assists. An all-out effort by the Highlanders was stopped short toward the latter end of the period. Following a Cox error at 24-19, UCI converted on a set point with a deceiving tip over the net, which gave the Anteaters the first set 25-19. UCR’s eight errors hurt them compared to UCI’s two in the first set.

“Offensively, we played more consistent. But defensively we weren’t on all of our assignments,” said UC Riverside Head Coach Michelle Patton.

Coach Patton pinpoints success on both sides of the ball as a key ingredient to putting wins on the board. “We either have good defensive games or we have good offensive games,” she stated. “Putting those two together … is one of the things we’ve been working on.”

Despite losing all but one game this season, the Highlanders possess an intangible asset of team comradery. During timeouts, the Highlanders huddled tightly around the coach, arms over one another’s shoulders. Supportive student fans had one-way arguments with the referee each time a call went against UCR. The crowd went wild during exciting rallies.

Looking into their next game, the players have plenty to study for besides school. “(Long Beach State) is much different … It’s a little more complex. So we really have to be studying … and be ready to slow down balls faster,” Patton explained.

Despite not having the same rowdy crowd of Thursday night’s game, the Highlanders seemed to have improved their play overnight. They pushed the 49ers to four sets, but failed to secure the victory as they lost 25-17, 23-25, 25-17, 26-24.

In the opening set, the team blocked the larger CSULB hitters and used a combination of spikes and tips to open a 16-15 advantage. UC Riverside lost crucial points at 16-16 and 16-17, which spurred a 49ers run to the first set, 25-17. The versatile Ashley Cox had five kills and three digs in the set. Maddie Hubbell tallied five digs while Bender Nae recorded 11 assists.

In the second set, the determined UCR team bounced back to a 15-11 lead. Long Beach’s six errors cost them as the Highlanders capitalized on their mistakes. Exciting Riverside rallies usually ended with an error by Long Beach. Riverside’s fierce concentration in the period was clearly evident. They finished the set with a kill from Annishia McKoy, giving them the second set, 25-23.

The third set had a similar result to the first, ending with Long Beach on top, 25-17. However, the fourth set was different as the Highlanders jumped out to a 15-10 advantage. UCR scored a string of points with blocks from Lindsay Hornsby and Tyler Dorsey as well as strong serving from Cox. The 49ers responded, however, as the squads battled to a 22-22 tie. A kill from McKoy gave UCR their first set point, but a serve out of bounds followed by a pair of Long Beach State kills cost the Highlanders the final set, 26-24.

The Highlanders next compete on Friday, Nov. 22 against Cal Poly San Luis Obispo.