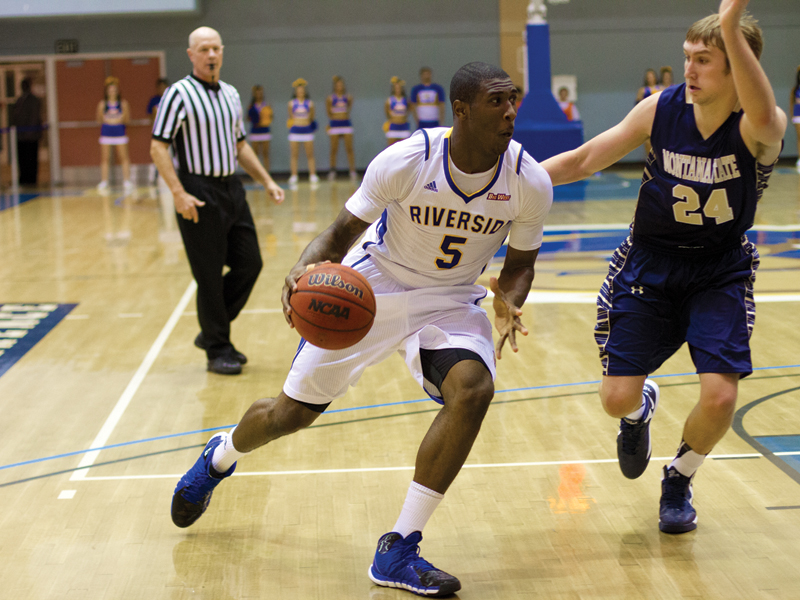 This week saw the UC Riverside men’s basketball team play its first two home games of the season. The Highlanders lost their home opener against Pepperdine on Nov. 13 as the team went down to the wire, falling 69-66 in the final possessions. The following game, UCR, backed by the roars of a near-capacity crowd, secured its first season victory, 72-67, on Homecoming game behind a career-high 31 points from Taylor Johns.

Wednesday’s game found Riverside down early due to a lack of aggression on their side and lights-out perimeter shooting from Pepperdine. UCR shot only three free throws in the first half, making two. They only made 2-of-11 threes in the half as well. Meanwhile, the Pepperdine Waves made eight of 11 free throws and six of eight three-pointers in the first 20 minutes. Despite this and out-rebounding Riverside by eight, the lead was only eight going into halftime, 40-32, due to otherwise tight defensive play that led to seven Wave turnovers.

The second half was when the Highlanders and the rowdy crowd started to raise their level. Riverside cut the lead to two points at the 10:30 mark as the Waves cooled off and UCR went on a run. The game remained extremely close, with UCR guard Steven Jones making a shot and a free throw to bring the lead to two once again, 59-61. During the final minute, no one was in their seats as Steven Thornton made a basket with 54 seconds left to tie the game, 63-63. However, Pepperdine made all six of their free throws from that time on, and the Highlanders wound up coming a tad short, losing 66-69. Chris Harriel was the high man for Riverside, scoring 15 points, including a couple of impressive dunks scattered throughout the game.

Saturday night, the men’s basketball team played their Homecoming game against Montana State, and it did not disappoint the packed Student Recreation Center crowd of over 2,000 fans. In the first half, a hot Montana State team connected on 14-of-26 shots, but Johns’ 12 points on six-for-eight shooting helped the Highlanders end the half tied at 30 apiece.

During halftime, basketball alumni were honored, from coaches to players, going back as far as 1950, and they all watched Taylor Johns put on a show in the second half. Johns scored a career-high 31 points on an incredibly efficient 13-of-16 field goals.

“I had a good night,” he said after the game. “I felt it early. My teammates saw that I had it going and that kept feeding me, so it was a team thing. A few of my teammates hit jumpers and that freed me up.”

Despite his heroics, the game was a close one to the very end, with UCR clinging to a four point lead, 67-63, with just under two minutes remaining. But this time, Riverside made the clutch free throws and tough rebounds to hold on to the lead, winning 72-67.

The win was the first of the season for the Highlanders, and the first ever for Dennis Cutts as the team’s interim head coach. Afterward, he said, “It’s great. But I’m more happy for these guys. They earned that.”

He also discussed Johns’ progress so far in this young season, saying, “Taylor Johns has been unbelievable. I couldn’t be happier for him. He’s really worked at it. These first two games he’s played really well. He was in the gym early Friday morning working and his confidence is starting to grow. He played like a man tonight and it was great to see.”

Rookie guard Sam Finley also stressed the importance of the UCR big men getting involved: “We have three dominant bigs (Taylor Johns, Chris Patton, Lucas Devenny), so if we get them going early, it leads to easier shots for us.”

After starting the season with two losses, the UC Riverside women’s basketball team was determined to put a win on the season’s calendar. On Friday evening, the Highlanders faced San Jose State University and dominated with a 105-74 win, scoring the most points in the school’s Division I history.

The Highlanders started the first three minutes with 11 straight points. San Jose State didn’t have the same luck as they missed four shots from the field and a pair of free throws before Spartan Riana Byrd scored three minutes in. Throughout the first half, the Highlanders continued to push forward and reached a 20-point lead at the 8:40 mark, 37-16. The half came to an end with a layup from Highlander Taylor Wallace and a three-pointer from Annelise Ito.

Coming into the second half with a 50-30 deficit, the Spartans were determined to change the scoreboard around. The Highlanders, however, kept increasing the lead as it grew to 27 at the 14:46 mark, 66-39. The Spartans were able to make it a 19-point game with 6:32 to go. As both teams continued to fight for the lead, the Highlanders just kept running the ball in their favor and closed the game with a 31-point win, 105-74.

The Highlanders were able to shoot 54.5 percent from the field, unlike the Spartans who only shot 36.8 percent. Four players scored in the double digits: Brittany Crain once again showed her ability to come out on top by scoring 23 points and grabbing four rebounds. Natasha Hadley followed with 21 points and 10 rebounds while Ito scored 20 points. Kiara Harewood contributed by scoring 12 points and securing eight rebounds.

Looking to win their second game of the season, the UC Riverside women’s basketball team faced Santa Clara on Sunday afternoon. Facing a sizable halftime deficit and foul trouble, the Highlanders battled behind a career-high 37 points from Brittany Crain to come away with a 90-80 overtime victory.

As the game began, the Highlanders took an early lead, but it wasn’t long until the Broncos caught up. The Broncos were successful in shooting 51.9 percent from the floor while the Highlanders only shot 32.0 percent. Scoring the last five points of the period, the Broncos closed the half with a lead of 42-34. The Highlanders’ forwards all were in foul trouble as Natasha Hadley, Jamila Williams and Kiara Harewood racked up three fouls apiece. Crain scored 17 of the team’s 34 points in the period.

Entering the second half, the Highlanders were able to turn the game around. Minutes into the half, freshman Simone DeCoud reeled off seven consecutive points to give UCR a 52-48 lead. As the second half continued, the Highlanders led the game by 10 on several occasions. With three minutes remaining, the battle continued, but the Broncos were successful in chipping away at the lead. With UCR ahead 74-72 and the pressure mounting, the Highlanders fouled Santa Clara’s Vanessa Leo. The Broncos sank both free throws to tie the game, 74-74. UC Riverside attempted two shots, but both went awry as the game went into a five-minute overtime.

The first three minutes of overtime clearly showed that it was Riverside’s game. With nine straight points, the Highlanders took the lead, 83-74. UCR’s defense held the Broncos to 1-for-12 shooting in overtime en route to a 90-80 win.

Crain did a phenomenal job by scoring a career-high 37 points with 9-for-13 shooting from the field. The North High School product also shot 16-for-20 from the foul line and grabbed seven rebounds. Freshman Decoud added a career-high of 20 points and five rebounds. Hadley tallied 14 points and eight rebounds in a foul-shortened game.

Hoping to gain more wins, the Highlanders are preparing for the Great Alaska Shootout on Nov. 26 and 27 in Anchorage, Alaska.