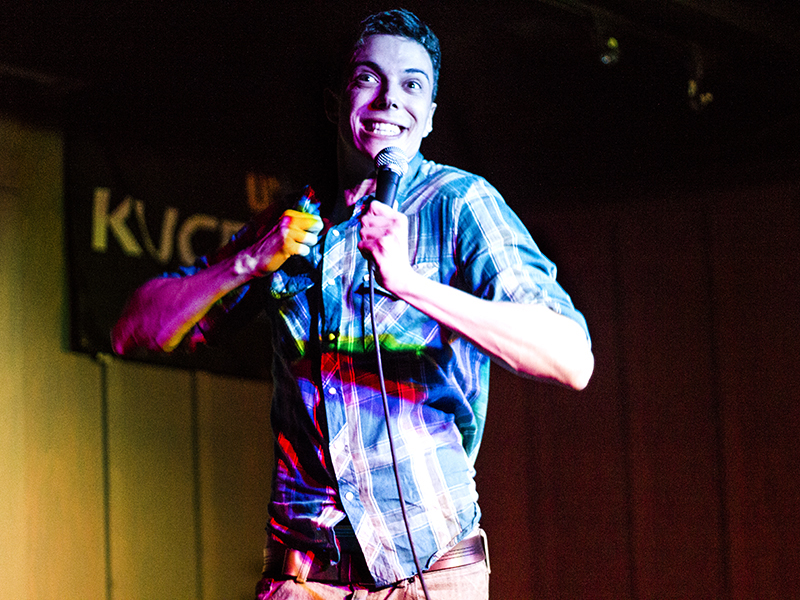 How do you think the apocalypse will come?

Meteor impact is always a popular choice. With global warming increasingly in the spotlight, some have argued that we’re in for massive flooding. If “World War Z” and “The Walking Dead” are any indication, zombie invasions have gained ground in recent years.

But if UCR’s Comedy Apocalypse is the final arbiter of what doomsday will be, the world will not spontaneously combust in a flurry of fantastical fiery explosions that are amazing to the eye but fundamentally devoid of substance. Instead, the experience will be closer to steadily draining the trees and sky of their color and living the rest of your life on a dolorously colorless planet. Still, the audience seemed to have a good time. And even if the event didn’t seem humorous to me, it gave me plenty of things to think about as I left for the night.

The show started off literally monochromatic when a 1969 black-and-white documentary detailing students’ lives at UCR was projected onto the back of the Barn. Finding all the similarities and differences between student life then and now was an entertaining endeavor, and watching the escapades of UCR students during the rollicking 60s was fascinating.

However, even though the event had “comedy” in the headline, the 30-minute-long film wasn’t funny. I honestly thought at first that the only reason the film was playing was due to a comic being late. Most people in the audience had no problem pretending it didn’t even exist, and talked with their neighbors or ordered food as the neglected film forlornly trudged on in the background.

When the first comic, Hampton Yount, took the stage 30 minutes after the show’s alleged starting time, he didn’t hesitate to poke fun at the absurdity of a documentary preceding his comedy routine. “Have you ever seen live entertainment? They usually don’t show a documentary about Auschwitz or whatever. What was that about?” Yount snarked to a suddenly enlivened audience.

Yount’s set was wide-ranging as he skillfully imitated accents, making cracks about the inability to argue with conspiracy theorists and over-enthusiastic British infomercial salesmen. But as he moved on, the audience grew silent and he had trouble rebounding, which is a shame because his later material asked some of the most insightful questions of the night. When he introduced the topic of online dating, he highlighted the gender disparities inherent in our society as he compared the “radically disproportionate” fears between men and women — men fear dating a woman who doesn’t look like her profile picture; women fear dating a man who is actually a murderer. He then mocked the overly romanticized halcyon days of our grandparents by cracking that stalking a woman for days isn’t sweet; rather, “it sounds like you defeated a broken woman.”

The night calmed down and took on a conversational vibe as the hyperactive Yount passed the torch to the soft-spoken Beth Stelling. She began her set to uproarious laughter by poking fun at her weight. “I have to keep the boner population down,” she said as she made exploding sounds that imitated penises erupting from men’s jeans. “And you know what? Pants are expensive.”

Stelling drew the audience in with her frank and personal style, and society’s depiction of the intersection of women and sexuality proved to be a frequent target. Regaling the eager audience with stories of sexual escapades, she lambasted society’s absurd prohibitions preventing women from embracing their sexuality. But she also made clear that it’s not okay for men to prey on that sexuality, sarcastically explaining her motivation for beginning work at an eatery: “You know, I took the job for the same reason we all take jobs in the food service: for the sexual harassment.”

Jerrod Carmichael perfected Stelling’s conversational style and proved to be the most successful comic of the night by venturing into controversial territory and doing it well, and his act only got better as the night went on. His opener made it clear that nothing was off-limits as he compared his relationship with America to that of a battered wife with an abusive husband. “Sure, to the rest of the world America may seem like an asshole,” Carmichael explained. “But you don’t know America like I do. America’s good to me. Sometimes I just need to learn to shut the fuck up. And make America a sandwich.”

And as if the locks on a dam were instantaneously released, the jokes and laughs rushed out of the Barn. The political incorrectness continued as Carmichael savaged American society. He lauded UCR students for achieving success in the world by saying, “You’ve made it just by not going to DeVry.” And if Dr. Martin Luther King, Jr. were still alive today, Carmichael asserted, today’s society wouldn’t allow him to be the civil rights leader he was in the 60s. Instead, he would be relegated to selling Viagra on late night television. By stating that we’ve degenerated as a country, the comic aptly articulated the fears of an uncertain future that hound college students today.

Carmichael closed the show on a stronger note than the rest of the comedians combined. Yet, throughout the set, I found myself more frequently considering the implications of what they said rather than being enthralled by the comedy of their jokes.

Maybe I was an outlier — the rest of the audience seemed to have a great time. But even if the show sometimes fell flat, Comedy Apocalypse accomplished something much more interesting: It made me think. As good comedy should, each comic made me ponder the state of the country we live in and the society we participate in. The show was comedic at times, but the Comedy Apocalypse was more philosophical than anything else — which is a form of success in and of itself.