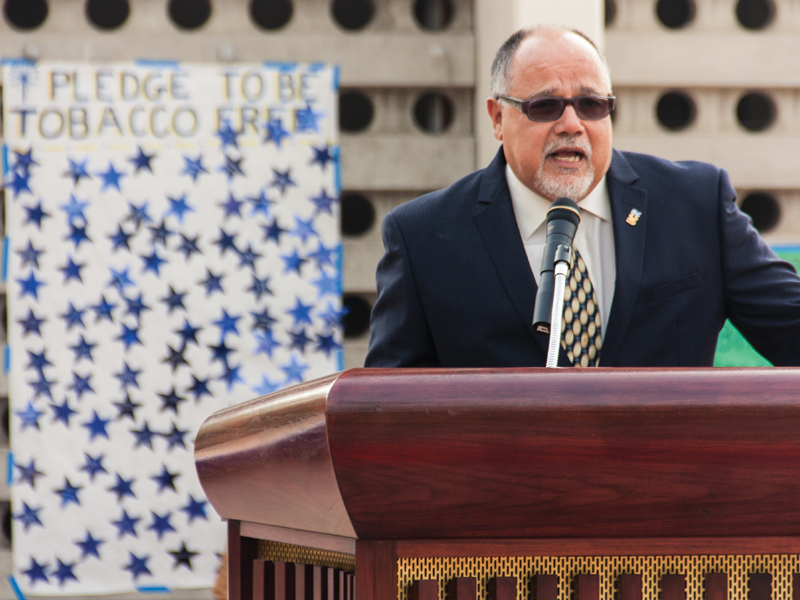 Whether there is something in the air — or lack thereof — UCR shined a little bit brighter in the first week of winter quarter. As of Jan. 2, 2014, R’side joined over 1,100 colleges and universities in the nationwide smoke and tobacco-free campus policy: Clearing the Air. UCR threw a celebration to not only celebrate the air and environment of the campus, but also the health and well-being of the community. Clearing the Air gathered students and faculty together to celebrate wellness with campus organizations to get everyone excited and aware of UCR’s future.

At 11 a.m. on Jan. 9, the Bell Tower’s chime was drowned out by club hits that blared through speakers from a DJ. Students hustled through to their next class, the HUB or anywhere away from the lecture halls, and soon took in their surroundings. As the DJ spun the tracks in front of the Bell Tower, a wall of fame titled “Pledge to be Tobacco Free” hung behind, awaiting the first star to be pinned. A photo booth on the side greeted students, who posed with a wig and a grin. Gold stars of names of UCR officials and the years they remained tobacco-free were scattered around a red carpet, which led students to the first table to pledge to also be tobacco-free. If getting their own star wasn’t an incentive enough, students also received wrist bands to obtain free food during the celebration.

Tables covered in pamphlets and stress balls urged students to visit organizations such as the Health and Wellness Center (The Well), all of them promoting and explaining the benefits of a smoke-free campus such as air quality in and around buildings as well as long-term health of students. Along with free resources, guests also received free goodies. The Health and Wellness Center gave each a goody bag containing lollipops, mints, straws and toothpicks to keep the mouth busy instead of a cigarette — a “Salvation bag,” as fourth-year and Well employee Morgan Nixon called it. Nixon also informed many about the New Years’ resolution support groups and meetings for those who may need an extra push to reach their resolution of not indulging in tobacco or just to meet others with the same goals. Students also found out about “Class Sensations”: encouragement groups that work with tobacco treatment specialist VJ Sleight to provide support and materials to help anyone who wishes to nip smoking in the bud.

Students gravitated toward the Well and Office of Sustainability booths to play “Smoking Roulette,” a spin-the-wheel learning game about the effects of smoking as well as the effects it has on campus. I played the game to guess the amount of cigarette butts collected around Watkins last quarter over the course of two days. I guessed the number right on the head (392 butts) and received a free water bottle and weird stares.

Director of Sustainability Dave Cook gave me insight about the environmental effects of smoking and cigarettes, such as the staggering number of cigarette butts that covered the earth last year: 4.7 trillion. He explained that he was not that surprised to find the amount of butts on campus with the stressful and social environment the campus is. “It’s going to be a gradual change, but there will be,” he added. Tim Willette, head of the staff of the event, shared his story of working on the airlines while inflight smoking was banned. Passengers worried about how they would handle a six-hour flight without a cigarette. “Four years later and they are doing it … come back (to campus) in four years, and you’ll see students doing it too.”

With that said, Clearing the Air understood the challenges smokers may have and provided a “Survival Guide” for tobacco users filled with things to consider while on campus like how to leave campus properly to smoke, manage cravings and stress and much more. Each organization was there to let people know they are there to help, promote and encourage wellness amongst the community.

As the walking cigarette butt named “Buddy” made his way around the event to keep the mood as light as the celery and carrot stick snacks students were given, Chancellor Wilcox made his way to the podium to follow speeches by Director Lovekin and Julie Chobdee — who had worked on Clearing the Air for almost two years. Wilcox opened with what a big change this will induce, and the challenges we will take on, “but we will take everything on together.” The idea and value of “community” was heavily emphasized, as UCR is known for its sense of community throughout. “We share the air,” Wilcox said, as he promised an even brighter future.

The music slowly faded and tables were nearly empty come 1 p.m. Students returned back to their regularly scheduled Thursday and the area around the Bell Tower soon became vacant. “Pledge to be Tobacco Free,” however, was overflowing with pledge stars, shining from end to end.