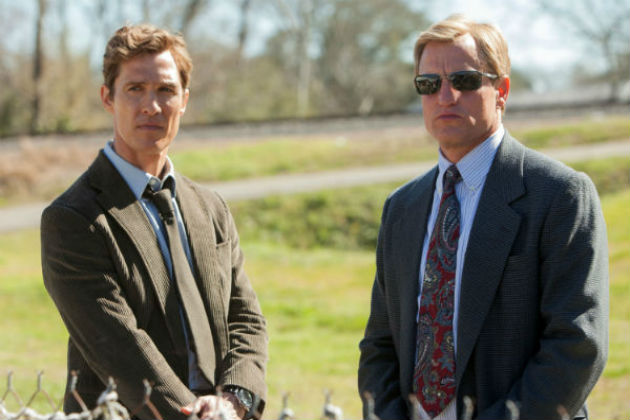 This week’s episode of “True Detective” is titled “Seeing Things,” and the whole episode is about exactly that: what’s revealed before your very eyes. Whether it is Rust Cohle’s (Matthew McConaughey) visions, how Marty Hart (Woody Harrelson) self-medicates from working the Lange murder or the unexpected take on religion, “True Detective” does a phenomenal job of introducing us to the surreal elements of its world.

The episode begins right where we left off in the interrogation room last week, with Cohle reminiscing about his daughter, three Lone Stars down. We cut to the murder back in ‘92, with our two detectives interviewing Dora Lange’s mother. She states that she saw news of the murder on TV and prayed for the family, only to find out that she was praying to herself and it went unanswered. She then gets paralyzed by headaches and recites her Holy Marys, clutching onto her head, revealing scabs and blood around her fingernails. The scene does an amazing job revealing and introducing us to “True Detective’s” world, establishing that religion isn’t quite like what church is for you and me down the road. Religion here creates a foreboding feeling, and we’re left waiting to see how it plays out.

After interrogating the mother we finally get some insight into how the murder is affecting our two detectives. In the car, the viewer sees these men relating to one another, not arguing. Hart tells Cohle how his mother was the Donna Reed type, packing lunches and such. Cohle admits to his daughter’s death and his divorce. The murder creates a bond between the two cementing a true partnership.

Rather than focusing on solving the murder like many other detective series, this show focuses on how the murder is affecting the detectives. While being interviewed about the murders, Cohle discusses how hard it can be to live with him because of his critical nature. But he thinks he has it good now; “Now I live in a little room, out in the country, behind a bar, work four nights a week and in between I drink.” McConaughey delivers these lines almost half-asleep and appears completely defeated in his self-denial, allowing the viewer to see how badly the years working murder cases has affected him.

But for Hart, we see firsthand how the ‘92 murder affects him. We cut to Hart being interviewed in the present day. He discusses how, in order for a man to do his job right, he needs to decompress and get his head right from all that bullshit before going home. He lets his interviewers know it’s for the good of the family. Flashback to 1992: He’s drunk, showing up to the apartment of the courthouse woman, Lisa, with a bottle of Captain Morgan’s, only to be handcuffed to the breakfast nook while she takes off her shirt and kisses down his chest until she is out of the shot. It’s all for the good of his family though, right?

The scene shifts to Cohle driving down the road back in ‘92, and the lights around him swirl in spectacular visions. He’s barely able to focus on the road. We jump back to the cops questioning him and Cohle reveals his four years working undercover in a HIDTA (High Intensity Drug Trafficking Area) and his four-month stay in a psychiatric ward. He discusses how back in ‘92 he was getting LSD flashbacks from his time undercover, and how the murder began speaking to him. The show begins to hint at the supernatural, as if Cohle is some LSD-addled RoboCop determined to solve the murder.

Out two detectives hit a break in the ‘92 murder case when they visit visit a hillbilly bunny ranch out in the swamps outfitted with doublewides and tiki-torches. It turns out the murdered girl, Dora, used to work there and left behind her diary. It is filled with pages referring to the yellow king, Carcosa and flyers for a church in the woods. Cohle relates to Dora’s ramblings, figuring she was consistently dosed with LSD. Prior to this, the show had been pulling at the threads of a cult vibe. With this the threads break, creating the dark and eerie underworld this television show is rooted in.

Their flyer takes them to a burned-out church in the middle of nowhere, only to reveal a crude, cave-like painting of a king with antlers on his head. Although this is all we discover about the murder in the episode, it still feels like enough to be revealed because this show isn’t truly about the case. It’s about these two men and how they are able to come to terms with what is going on around them. Both feel the need to self-medicate — whether it’s booze, Quaaludes, affairs or cough syrup, they are struggling to stay human on a case that is slowly blurring the line between real and surreal with no clue where we are going to land.

Even though we went deeper into Marty’s character, Cohle still steals the show through his elusive detective sleuthing brought on by LSD flashbacks, leaving the audience wondering what else will be mainlined into his brain next week.