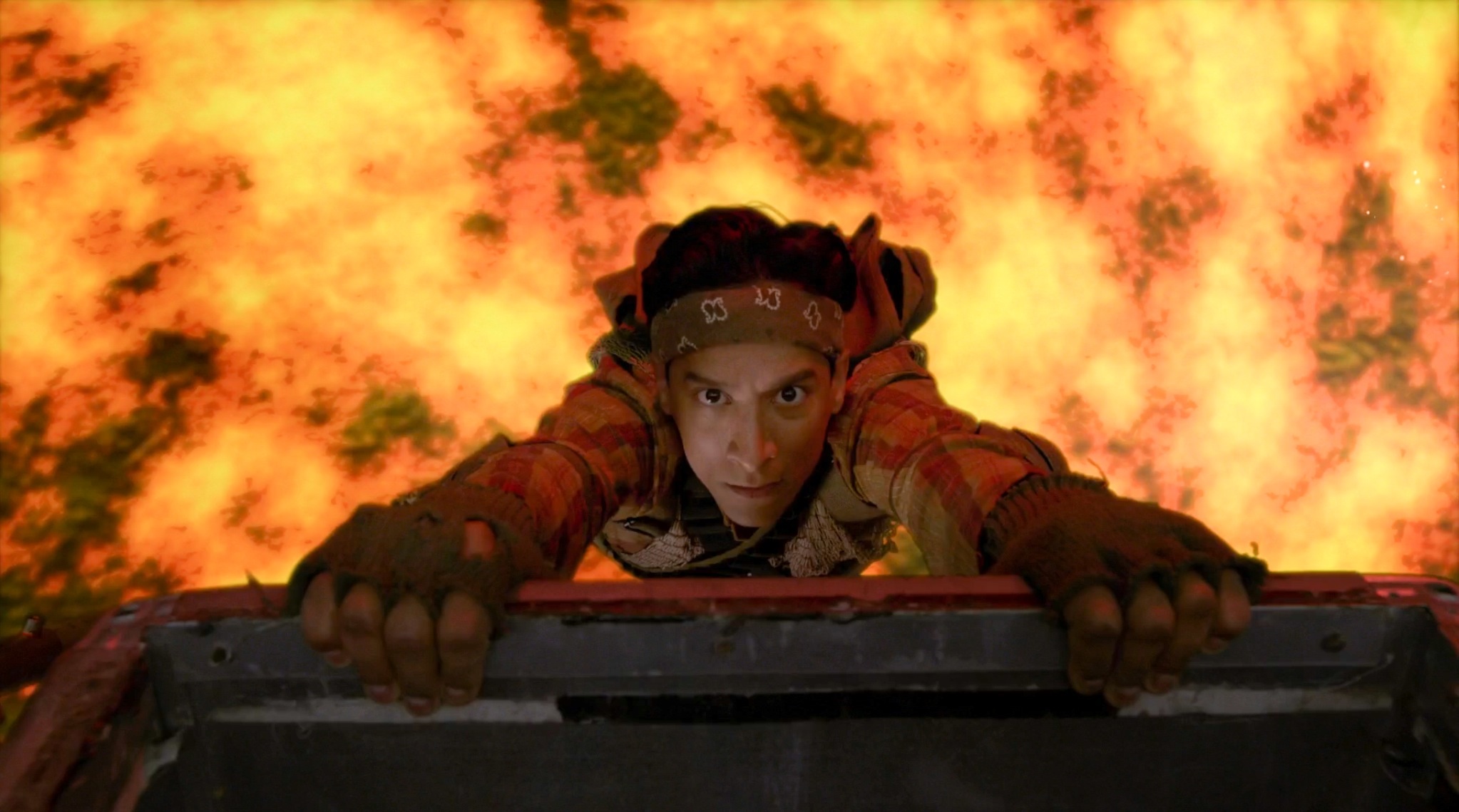 If you played Hot Lava as a kid, where you stood on various pieces of furniture to keep from touching the now lava-covered floor, then you’ll understand what “Geothermal Escapism” is all about. On the day Troy (Donald Glover) is set to leave Greendale, Abed (Danny Pudi) initiates a school-wide game of Hot Lava for Troy’s going-away present.

If there’s one complaint I had about the episode, it’s that the game of Hot Lava turns out a lot like the paintball game in season two’s “A Fistful of Paintballs.” While that episode had a western theme, “Geothermal Escapism” adopts an apocalyptic “Mad Max”-esque variation. But I could see some similarities, particularly between Shirley Island and Fort Hawthorne, which were both places of peace where people could step away from the games for a moment, as long as they left their weapons at the door.

But overall, I was pleased with the way “Geothermal Escapism” turned out. Strangely enough, I would attribute my good will toward its character-driven parallels to season two’s “Abed’s Uncontrollable Christmas.” Most of “Geothermal Escapism” features Britta (Gillian Jacobs) trying to help Abed with his feelings about Troy leaving. In “Abed’s Uncontrollable Christmas,” Britta got kicked off Planet Abed for tricking Abed into therapy.

Where the episode diverges from the Christmas episode, however, is that now Britta is more trusting of her friends. About halfway through the episode, Abed confesses to Troy that he’s seeing real lava on the floor because Troy is leaving, and as soon as Britta hears this, she stands up for her friends, pushing Professor Hickey onto the floor before he can attack Troy and Abed.

Then, after Abed sacrifices himself to help end the game, Britta trusts both herself and Abed. She knows that she can fix Abed, or at least “fake-fix him,” by indulging in Abed’s hot lava fantasy. Inspired by the comic book Abed was offering as a prize to the winner of Hot Lava, she “clones” Abed with Troy’s help, all while still pretending to avoid the “lava.”

The times we’ve come closest to seeing a more mature Britta are in season four’s “Cooperative Escapism in Familial Relations,” when she helps Jeff reunite with his father, and in season three’s “Advanced Gay,” when Pierce’s father died. At the end of the latter episode, Jeff tells her, “You know what? I was wrong. I think you’ll make a very good therapist.” And we see that in “Geothermal Escapism,” because she understands Abed’s feelings and helps him overcome them in a way that he’s comfortable with. This isn’t the same Britta we would have seen in season two — she’s grown up.

But Britta isn’t the only one that has grown up. Troy and Abed have to ultimately go their separate ways at the end of the episode; after being cloned, Abed is willing to let Troy go, but Troy admits to being scared of going on the trip. In a move that lets the Troy and Abed we know and love shine through, Abed tells Troy that he doesn’t have to go — his clone can. Without losing their special Troy and Abed flair, they manage to let go of each other and their fears.

The episode then shifts from the end of the Hot Lava game to Troy’s farewell. Typically, when “Community” does high-concept episodes, the concept runs throughout the whole thing, but I liked the fact that Troy’s goodbye was presented as part of real life. Not only did it mean that the entire study group could be present, but placing the goodbye in reality made it more meaningful and emotional for the viewer.

Like Pierce last week, Troy gets to say goodbye to each member of the study group in turn, and these goodbyes are fabulous. Of course his goodbye to Abed is the most emotional because Troy and Abed have been best friends for so long. Abed tells Troy, “By the way, when I cloned you, I had to pad some missing parts of your DNA with genes from a homing pigeon. You may notice side effects, like a compulsion to come back.” And if you haven’t already been crying, now is the time.

The episode ends perfectly as Troy and the audience learn that Pierce assigned Troy’s childhood hero, LeVar Burton, from “Reading Rainbow” and “Star Trek: The Next Generation” to sail around the world with Troy. The last time LeVar Burton was seen on “Community” was in season two’s “Intermediate Documentary Filmmaking,” when Pierce arranged for Troy to meet Burton. While Troy freaked out and wouldn’t talk to Burton in that episode because he was afraid of disappointing him, this time Troy talks to Burton easily, although he says it’s because now he’s a clone.

So there we have it — the study group bids a “Bon Troyage” (the Twitter hashtag for the episode) as Troy rides away on his journey around the world to Styx’s “Come Sail Away.” The members of the study group may be dwindling, but if “Community” can deliver more episodes like this one during the rest of season five, I’ll probably be able to overlook that fact.