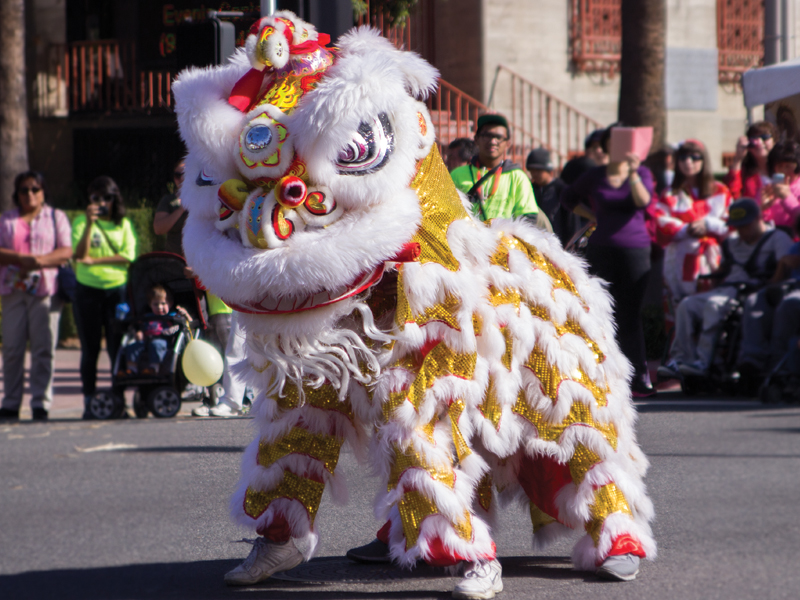 By the third week of winter quarter, the holiday honeymoon officially ends. Saturday mornings consist of sleeping past brunch hours, studying for midterms and calculating what grade you can get on a final to pass the class. But on the last Saturday of January, many had different plans to spend the day. UCR students, Riverside residents and even guests all the way from San Diego gathered in downtown Riverside to celebrate 2014’s Asian Pacific Lunar Festival. Visitors were immersed in various Asian cultures from the morning parade to the evening fireworks, enjoying a multitude of sights, sounds and flavors throughout the day.

Red lanterns strung across Mission Inn Avenue lured visitors away from the farmer’s market and into Asia. The Parade of Nations kicked off the morning. A dancing lion — from the UCR Vietnamese Student Association’s Tiger Crane Lion Dance team — led parade participants down Main Street and Mission Inn Avenue. Traditional music faded into the crowd’s cheers as they watched the dancers mimic the lion’s dance. Sumo wrestlers and cosplayers skipped down the street and waved sparklers to the children, who waved back from their parents’ shoulders. Once the tail end of the parade rounded the corner, more guests trickled in further down the road to the main stage to view the opening ceremonies.

I wandered around and ended up at a vendor selling long-mittened panda hats as well as bamboo trees. A little girl ran to the bin holding wooden bows and arrows and flipped her pigtails over her shoulder as she dug into it for her weapon of choice. She jumped to her feet, posing like Katniss from “The Hunger Games,” hunting for her prey. “Mommy, bow and arrows!”

Her mother rolled her eyes and turned her attention to the jewelry. “You have enough bows and arrows.”

“Never enough!” the little girl responded, releasing the invisible arrow into the sky.

My focus was shifted by the familiar beat of the drums. Any UCR student could recognize a taiko drum from miles away. I meandered to the main stage to see the Senryu Taiko drummers opening the ceremonies with their high intensity and powerful hits.

Performances bounced between the main stage, the library, metro station and the intersection of Mission Inn Avenue and Lime Street. The first few performances embodied all cultures of Asian heritage, appealing to every guest: traditional Chinese dances for the lovers and kung fu for the fighters. Many enjoyed the Bollywood dancers who took the stage, and many sought out all the other entertainment offerings.

While the parents took a mini-tour through the free health expo and explored their way into a healthier 2014, the kids bombarded the children’s village, where they designed their own fans and colored in their own Chinese New Year calendars. The parents practiced those tai chi breathing techniques as the kids dragged them to the face-painting booth across the way. They waited in line to get dolphins jumping off their cheeks or blood oozing from their eyes. Many of them were inspired by the cosplay participants that rolled in to show off their own style.

Cosplay first started in the 1930s at sci-fi conventions, where fans dressed up as their favorite characters. The trend traveled to Japan, where they coined it as “Costume play.” It started with Japanese cartoons and has thrived into a worldwide trend. Fast forwarding over 80 years, the Lunar Festival held warriors, princesses and Pokemon trainers. Jennifer — or better yet, Megurine Luka from “Project Diva” — and Kris Zoleta, photographer and director of Comicon, emceed the event and introduced models such as Riku from “Kingdom Hearts” and Goddess Hylia from “The Legend of Zelda.” I was quickly informed by eight-year-old cosplayer Kat Black from San Diego that cosplay has no limitations. As she showed me her homemade kimono, I could not help but gaze into her electric blue contacts. She explained it can be from any fandom, from “Doctor Who” to anime. Some ladies rocked the lolita dresses, and others laced up their boots to kick ass and take names. Kayla Anderson, a three-year cosplay participant from LA, wore the blood of her enemies as lipstick while dressed up as a character from “Sailor Moon.”

“In Japan there is a social stigma,” Kris Zoleta said, “but here in America, with the rise of ‘nerdom’ it’s almost cool to be a nerd … it’s a sea of perception. We are like a family.” He started in the festival when the director, May Lynn Davis, admired his photography and wanted his involvement. Three years later, Zoleta is a member of Riverside’s Asian Pacific Cultural Association (APCA) and created a free event for everyone to be a part of, not only for cosplay but the culture itself.

The scent of funnel cakes hovered around me as Sandra Blanco, third year, enjoyed a Chinese pancake. Others stuck with the pina colada and kettle corn. Tanya Hill, fourth year, revealed her fortune from a fortune cookie as she explained she didn’t know what the lunar festival had in store. “It’s cool, we saw the hula dancers … it’ll be fun to come next year.” Just like third-year Sahard Goleston, who tabled with UCR’s Psychology Club, didn’t know what to expect, but enjoyed it from the start with the parade. “I’ve never seen that kind of stuff besides in movies, so that was cool.”

As the sun dimmed down, the flames lit up. Tupua Productions performed the Samoan fire knife dance. The banging drums and flying flames did a number on my anxiety, but the crowd’s cheers kept it going. Fire marshals watched over the flame batons, but seemed at ease when performers caught them midair without even batting an eye.

Before the festival came to a close, founder and president of the Asian Pacific Cultural Association May Lynn Davis said, “I want people to learn about the Asian culture and Asian heritage. There’s diversity all over, and this is an inclusive event. We’re all one unit, and we’re all one community.”

It is said for the Lunar New Year, fireworks are shot off to scare away evil spirits and start the new year with happiness, love and prosperity. With that said, the entire festival counted down from 10, and once they ended at one, the night sky lit up in a glorious display. Car alarms rang behind the boom and pow of every spark. Streams of gold flew up and lit every face staring up in awe. Red sparks rained down on the crowd. Chinese lantern fireworks shot up into the sky to blow up the past and light up the future.

As the fourth annual Lunar Festival came to close, APCA Vice President Taffi Brandriff said this was the biggest and most successful festival yet. She hopes to keep it growing and see “the smiling faces engage in the culture.”