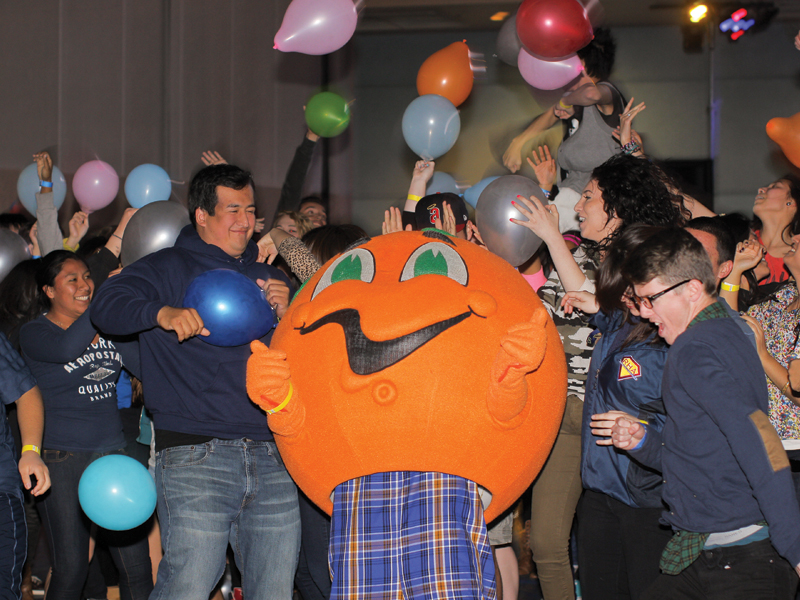 An anonymous donor will give up to $20,000 to the Golden Key International Honour Society and Student Alumni Association (SAA) to support UCR’s third annual Dance Marathon, if the co-sponsors can raise enough money to match his or her donation, according to Jane Kim, executive director of Dance Marathon 2014. The marathon provides funding for the Guardian Scholars, a program that supports scholarships for emancipated former foster youth who decide to pursue higher education.

“Based on what kind of fundraising we’ve done in prior years, we should have no problem in reaching it,” Nudge said.

Kim also alluded to the idea that the donor may be a former UCR alumnus, whose philanthropic contribution would inspire other potential sources to donate. It was noted that the donor has sponsored previous UCR dance marathons, which receives donations in their respective years.

She emphasized that the money raised goes back to the UCR community, adding that many private universities hold their own dance marathons. “Penn State raises over $10 (to) $14 million a year,” Kim said. “A lot of dance marathons raise thousands of dollars, hundreds of thousands of dollars every year, and that is generated by the students, and the friends and families of students.”

As a former Guardian Scholar herself, Heckmann emphasized the importance of the program. “We’re talking about students whose family is this program. So knowing that their peers are supporting them is really nice for them to know. It’s a good way to remind them that they’re not alone and that people really do care,” she said.

If the program raises the $40,000 overall donation, then it will go to support the current scholars for nearly a year, by filling in the program’s current annual operating costs of $50,000, according to Jan Forrester, Director of Scholarships and UCR TeleFund. The donations will also go to support various expenses such as year-round housing and even dental insurance.

SAA President Ravin Ahir expressed that he was thrilled to hear about the matching funds, which will continue to motivate their overall goal to provide financial support to the emancipated youths who aren’t provided with the same kind of family support.

“For example, when the campus closes for winter break and everyone goes home to stay with their families, the Guardian Scholars would have no place to go,” Ahir said. “Because of Guardian Scholars, the dorms can stay open, and students don’t end up on the streets. This is just one of the many things we’re working to support.”

Heckmann later shared her experience of partaking in the program and its significance to her.

“When I graduated, I mean I didn’t really want to walk … why would I walk? I mean, who was going to see me walk? And they were there for me. And they also helped me pay for my cap and gown. I couldn’t afford a cap and gown, there was no way,” she said. “So it’s little things like that, you know … it doesn’t end after four years; (the program) really does, I believe, change the educational, social and emotional outcomes of all of the students who are lucky enough to end up in it.”

The co-sponsors launched various marketing initiatives by holding Krispy Kreme and Boba Fiend fundraisers, sending out campuswide emails and reaching out to various student organizations during Wednesday Nooners. They also reached out to Chancellor Kim Wilcox, who is scheduled to speak at the event.

Past dance marathons were located in the Student Recreation Center, but the shift in Homecoming celebrations to November and a conflicting schedule in the Student Recreation Center prompted Dance Marathon to move to Aberdeen and Inverness Dining Hall this year. Dining and Housing Services is co-sponsoring the event and is providing the venue and some additional resources for the event free of charge.

Dance Marathon will take place on Feb. 22, but the public can still make donations until March 1. Interested participants must donate or raise a minimum of $25 for the event and the group that raises the most will earn a trophy.