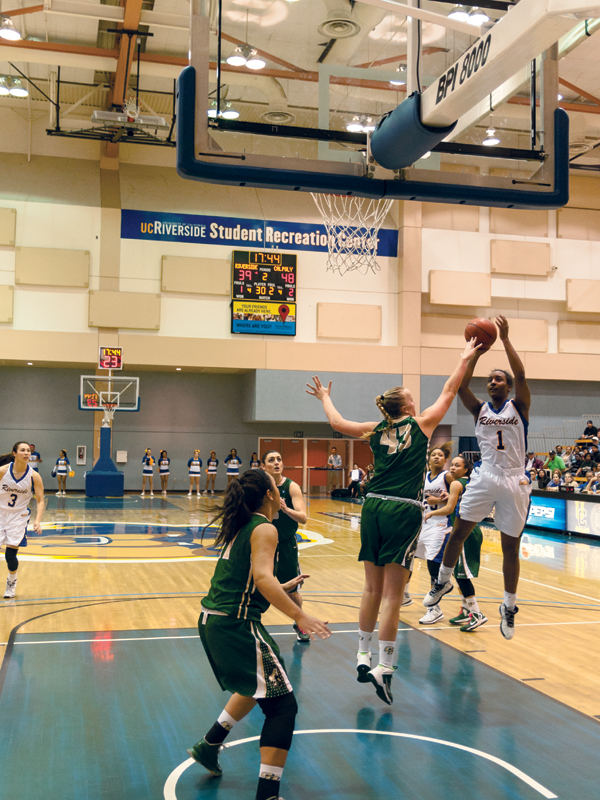 The UC Riverside women’s basketball team began its first win streak since December as the Highlanders gobbled up two straight conference wins, including a come-from-behind victory against the UC Santa Barbara Gauchos on Thursday night. Looking to extend the streak to three games, UCR received career highs from Simone DeCoud and Kiara Harewood, but it wasn’t enough as the team fell 83-72 to Cal Poly on Saturday.

Coming off their first conference win, Thursday’s game was yet another must-win for the Highlanders to stay alive in the hunt for the Big West tournament. The first half was a struggle however, with Riverside only shooting 22 percent from the field and 25 percent from behind the arc. However, the second half was a different story, especially for Brittany Crain, who seemed to flip a switch and went on a scoring tear, going for 19 points in that half alone for a game-high 31 points total. She also grabbed 11 rebounds, second only to teammate Kiara Harewood, who recorded 13. The guard showed her full repertoire as she consistently posted up, attacked off the dribble and pulled up from behind the arc.

While the lead in rebounds certainly helped UCR’s cause, it was their improved overall play in the second half and free throw shooting that won them the game. With a much more aggressive approach, Riverside shot 20 free throws in the period, making 17. This charge was led mostly by Crain, who made 14 of 15 free throws on the night. DeCoud also added to the second half turnaround, scoring 15 of her 18 points in the last 20 minutes.

Saturday night was also essentially separated into two polar opposite halves, as Cal Poly was unable to shake Riverside during the first 20 minutes, but was uncatchable in the second. Cal Poly had an 8-4 Big West Conference record going into the game, as opposed to Riverside’s 2-10 record, but play in the first half didn’t show the major difference in standings.

The Highlanders led by one early, thanks to three-pointers by both Simone DeCoud and Brittany Crain, but for every three-pointer UCR made, it seemed as though the Mustangs had one in response. The game saw no lead for either team higher than four until the final two minutes, in which a Riverside dry spell would allow Cal Poly to take an eight-point lead going into the second half.

The Cal Poly win can mostly be attributed to reigning Big West Conference Player of the Year Molly Schlemer, whose 6-foot-5-inch presence down low was hard to deal with.

“We tried to double team Molly, otherwise one-on-one she’s a huge presence,” said Head Coach John Margaritis after the game.  “Unfortunately they made a lot of their outside shots.”

In the second half, Riverside successfully got Kiara Harewood more involved on the offensive side of the ball, where she scored 14 of her career-high 18 points. “We knew we had a mismatch,” Margaritis said. “Kiara is smaller than Molly, but she’s much faster and quicker, so we tried to take advantage of that.”

When asked about the matchup after the game, Kiara said, “I felt good. I had a mismatch and I went with it.”

Although that strategy had worked on the offensive side of the ball, stopping Schlemer and her teammates on the other side was a larger problem.

UCR divulged their other plan to neutralize Schlemer’s threat as Coach Margaritis revealed, “we wanted to foul her out. That’s why we were being so aggressive.”

It paid off for DeCoud, as her attacks on the basket and three-point shooting led to a career night scoring with 27 points on better than 50 percent shooting from the field, free-throw line and from deep. However, Schlemer did not foul out, and had a huge impact on the game. She scored 20 points for the Mustangs (a team-high) and grabbed a game-high 19 rebounds, with eight of those being on the offensive side of the ball, helping Cal Poly score 21 second-chance points and 30 points in the paint, as opposed to Riverside’s nine and 16 points, respectively.

The Highlanders next play Saturday at Cal State Northridge, a game in which DeCoud believes they have a good shot.

“We’re confident,” she said. “Our guards match up very well, so we’ll see.”