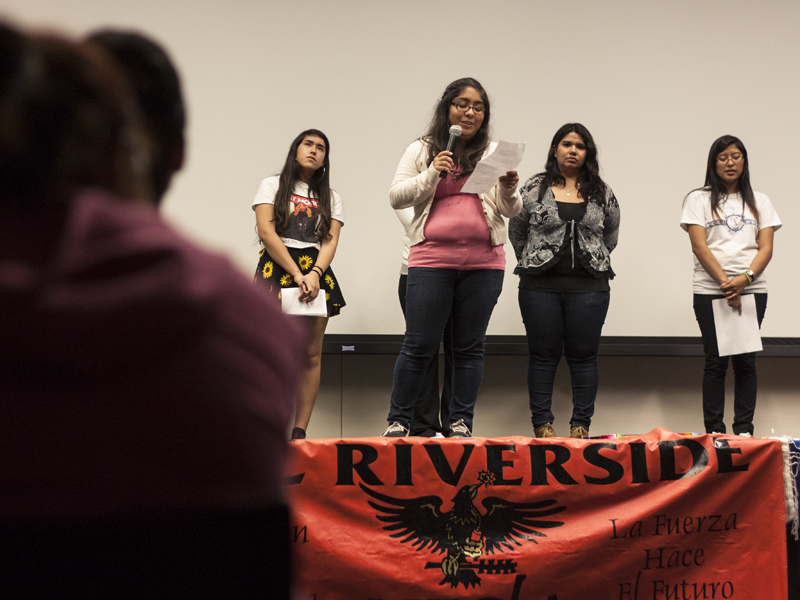 As soon as I walked through the doors of HUB 302 last Thursday night, I felt home. It may have been the Spanglish I repeatedly heard from conversations all around me. Perhaps it was the classic Spanish dance music playing in the background, or maybe it was the joy I saw in all the faces of UCR students as they laughed uncontrollably from the jokes being told in both in English and Spanish. Whatever it may have been, Poesia Peligrosa always brings the Hispanic family party to UC Riverside once a year.

The night began with the event’s keynote speaker, Felicitas M. Nunez. Nunez is a member and founder of Teatro de las Chicanas, a student-run organization established in 1971 at CSU San Diego. The organization utilizes acting as a method of presenting social issues to not only the campus, but also the world. It was specifically created for collegiate Hispanic women to unite and establish themselves as strong, independent women seeking positive social change through a “women-centered and women-identified social vision.”

Nunez read various excerpts from her book, “Teatro Chicana,” describing not only her personal experiences with the organization, but also those of her club members. The readings went along smoothly until Nunez shocked the entire room by singing the rest of her excerpt in Spanish. She then used the rest of her time on stage to present to the audience an image of the Virgin Mary, describing in great detail all the specifics of this iconic image, depicting the characteristics of the painting and explaining the significance behind each element. She described the Virgin Mary in such a familiar tone that one might think she knew her personally. I found it fascinating how Nunez described the holy figure as a representation of moon cycles, and how these moon cycles were an exact mirror image of a woman’s reproductive cycle. She then thanked the audience, took her seat, and was followed by the show’s traditional open mic portion.

Next, UCR’s own Teatro Quinto Sol took the stage and shared their poetry. The group consisted of five women who all went up on stage and, one by one, allowed the audience to open a window into their own personal lives. I absolutely loved that some of the poets had chosen to write and present their poems in Spanish. These women study and learn in a language that might be foreign to their parents, but to hear these strong Chicanas passionately share poetry about their history and family in Spanish was absolutely moving. For example, one poem described the life of a mother living every moment of her life for her children to succeed in this foreign land. The poem spoke of a mother who was similar to my own and others’ as well, who would give up her own life so that her child could could a attain a life she could only dream about. The poems continued to tell the women’s stories, each serving as a piece of the Chicana feminist movement. The “teatro” — theatre — and poetry of the night made female subjection known, but the women also reestablished themselves as empowered individuals. The crowd screamed and cheered whenever the poet shared a verse that explained triumph over any form of female subjection.

The women of Poesia Peligrosa all contributed to making the event one of the most powerful female feminist movements on campus. The event captured the essence of what female subjection has been in years prior, but also exemplified where women have come since then. Because of women like Chicana feminist Nunez, women can openly demand social change from social injustices and unite in song, poetry and acting to openly replay the subjection they faced — but more importantly, the victory they now have and can openly share to the campus, to the public and to future generations.

Once the event was over, I asked Nunez one simple question. “Based off all your personal life experiences and seeing how much of an impact you and the entire Teatro Chicana movement had made, what would you like to tell all of UCR right now?” She smiled and I could see the active feminista in her eyes.

“Use your education to serve the world,” she said.