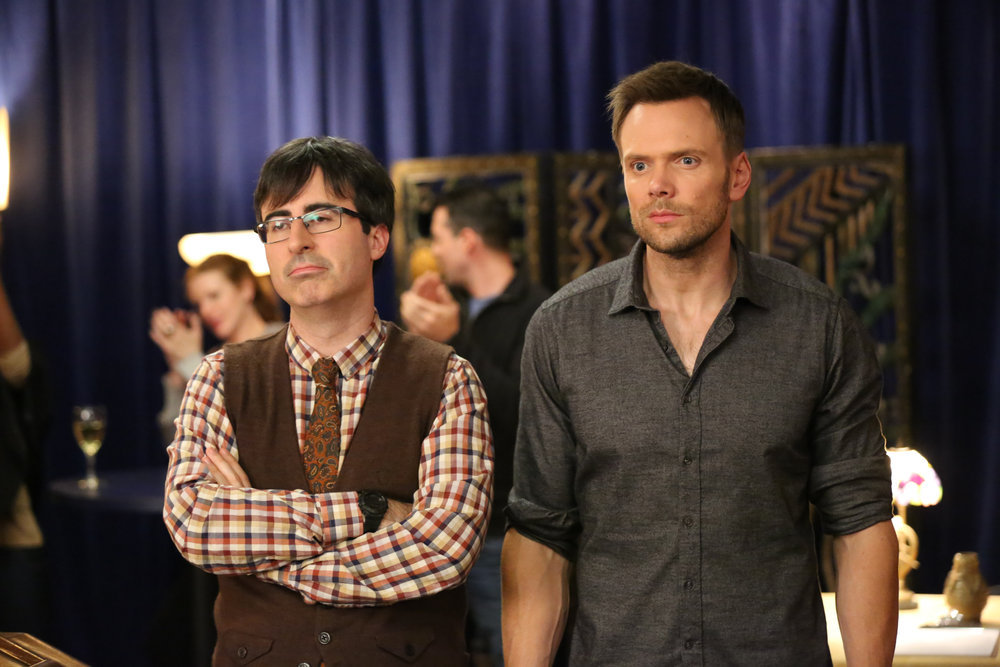 Now that the Olympics are over, “Community” is back, but I’m not sure this was the best episode to come back with.

It’s good that the show is trying to work in its new characters — Professors Duncan (John Oliver) and Hickey (Jonathan Banks) — in a way that feels organic. They’re part of the Save Greendale Committee, and it makes sense that they would have adventures with the study group now. But “Bondage and Beta Male Sexuality” places Duncan and Hickey at the center of their own plotlines, largely to the detriment of the characters we already know and love.

Significantly, this week’s focus on Duncan and Hickey leads to an unfortunate lack of Annie and Shirley. Right before the hiatus, “Analysis of Cork-Based Networking” managed to fit every character into a plotline and a bunch of guest stars besides, which makes dropping characters now all the more disappointing.

It should be noted, though, that with Annie and Shirley sidelined, we get to spend time getting deeper into Duncan and Hickey’s characters this week, which is important if they’re going to continue to be around in the future.

In the main plotline — also known as the Duncan, Britta (Gillian Jacobs) and Jeff plotline — Jeff (Joel McHale) agrees to help Duncan seduce Britta. Most of the Save Greendale Committee, aside from Abed (Danny Pudi) and Hickey, go to a benefit show for children with cleft palates. While Britta catches up with some of her friends from her anarchist days, Duncan and Jeff start fighting over who gets to seduce her.

It’s kind of annoying that Britta features largely as a pawn in the boys’ plot. The story leads to Britta getting to see herself through her friends’ eyes and realizing that she spends too much time defining herself based on other people, but any goodness Britta receives from this discovery happens largely off-screen. She’s mostly there to tell Duncan that he and Jeff don’t act like friends, and in such a Britta-heavy episode, that seems strange.

Still, I appreciated the fact that Britta got to call Jeff and Duncan out for not being friends, and I liked their reconciliation as well. Jeff and Duncan as friends, or at least comrades, was established way back in the pilot episode, and bringing Duncan back to that place helps to alleviate some of the crazy and unlikeable things he did over the years in episodes like “Abed’s Uncontrollable Christmas” and “The Psychology of Letting Go.”

The theme of friendship also ties in nicely with the Abed and Hickey plotline. In the kind of move “Community” pulls off well, the episode recalls the past episodes in the season. Namely, Abed still hasn’t come to terms with Troy’s absence. We see this when he looks sadly at Troy’s chair in the study room after getting ready for a “Kickpuncher” movie marathon.

Based on this evidence of Abed’s loneliness, I would almost believe that he deliberately provokes Hickey by ruining his duck drawings. It makes sense for Abed to play a game to ease his pain, instead of understanding the consequences of his behavior — and the fact that Hickey would be angry.

Unfortunately, the episode doesn’t delve into this. It does, however, wrap this plotline by allowing Abed and Hickey to be working partners, if not friends, on Abed’s movie script. I expect this means we’ll be seeing more interactions between Abed and Hickey in the future, so maybe it will be addressed then.

Finally, the Chang (Ken Jeong) plotline is easily the funniest one of the night, probably due to the fact that it’s supposed to be the funny plot and doesn’t need much substance beyond its ghostly premise. Over the years, Chang has become more and more superfluous as he moved away from Greendale and teaching, and season four’s “Changnesia” story didn’t change that.

Still, as much as I dislike Chang, I do like ghosts. Plus, if there were anyone on the show crazy enough to have an existential crisis over whether they should listen to ghosts or not, it would be Chang. The fake-out twist at the end — which the Internet has informed me was a “The Shining” parody — with Chang being in an old-timey photo, but only because he was in the old-timey photo club, made me laugh. It would have been ridiculous for Chang to actually be a ghost, but for a second, I believed it. So the laugh was probably more relief that “Community” wasn’t crazy, instead able to poke fun at used and abused tropes like the main character having secretly been a ghost all along.

It was a nice note to end the episode on. I only wish the rest of “Bondage and Beta Male Sexuality” could have been as good.