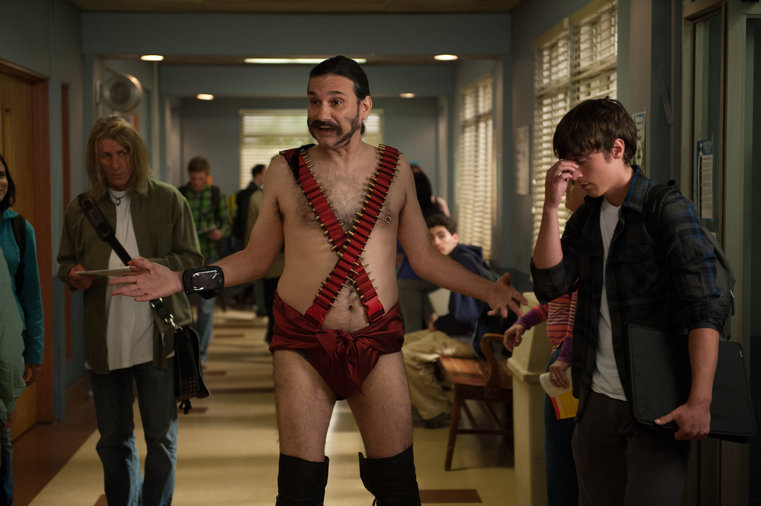 On “Community” this week, we’re back to focusing on the original members of the study group: Annie (Alison Brie), Abed (Danny Pudi), Shirley (Yvette Nicole Brown), Jeff (Joel McHale), and Britta (Gillian Jacobs) — but ultimately this is Jeff and Shirley’s story.

Like most Jeff and Shirley stories, the theme of “App Development and Condiments” is competition. Greendale is ground zero for the beta-testing of a new phone app called “MeowMeowBeenz,” which essentially allows you to vote about people on a scale of one to five MeowMeowBeenz (instead of stars).

As with anything Greendale gets involved in, MeowMeowBeenz quickly takes over the campus. This is actually less ridiculous than it sounds, given the Internet’s similarly quick obsession with Flappy Bird last month. However, “App Development and Condiments” takes this craze to an extreme when a new social hierarchy forms when the people who are rated fives lord over all.

Shirley is the most vocal member of the group of fives, but most of the Save Greendale Committee is there, too. The most ridiculous thing about this is that Chang has a five only because he’s pretending to have a limp, but the fact that Hickey has gotten a five because he realizes no one will downvote him on his birthday is pretty smart. These facades fit both characters well.

Jeff and Britta are the only two Save Greendale members who don’t have fives. While Jeff would be expected to have a high rating, he doesn’t sign up for MeowMeowBeenz right away, which means it takes longer for his rating to go up. It makes perfect sense that Jeff wouldn’t have downloaded the app right away because he’s secure in his ability to be cool, and he remains secure in that ability throughout the episode.

In fact, Jeff only downloads the app after seeing Shirley’s score at a five. Because Shirley is nice to people, her rating gets up to five quickly, but she uses that power to get her followers to drop other people’s ratings. We’ve seen this competitive side of Shirley in past episodes — most notably in season three’s “Foosball and Nocturnal Vigilantism,” where we learn she bullied Jeff during a game of foosball when they were both younger — and it’s been a good contrast to Shirley’s always-nice side.

In “App Development and Condiments,” Shirley’s competitiveness is brought out by the fact that Jeff didn’t invite her to dinner with the rest of the Save Greendale Committee. The group discusses the dinner invitation before MeowMeowBeenz takes over campus, and it comes back after Shirley and Jeff’s fighting causes the other fives to demote them to ones, who are “garbage” according to Dean Pelton.

While the episode seems to have been leading to a Jeff and Shirley conversation, their talk doesn’t end up going anywhere. They both admit that they like being in control, and Shirley says they should be better friends, but this is interrupted by Britta’s plotline. For the story to really work, it should probably have had lasting consequences and an impact on the Jeff-and-Shirley relationship, but there isn’t any time for that. The two do seem reconciled at the end of the episode, but it’s hard to say why.

Unlike with Jeff, there’s not an explicit explanation for why Britta’s rating isn’t higher, but it’s implied that Britta’s two stems from the fact that people inherently dislike her, a concept the show has always played with. It also has to do with the fact that Britta is — no surprise here — adamantly against MeowMeowBeenz and its resulting social hierarchy. In a plot that is reminiscent of Britta’s battle with Subway in season three’s “Digital Exploration of Interior Design,” Britta tries to sabotage MeowMeowBeenz.

Unlike “Digital Exploration of Interior Design,” Britta ultimately succeeds in getting her fellow twos and threes on her side, in large part because of the mustard on her. Yes, that’s right — mustard. Earlier in the episode Jeff and Annie note that it somehow makes people “more open to” Britta’s opinion, so Britta takes their advice and smears mustard on her face to get the people to listen. Honestly, it’s kind of a ridiculous plotline, and I’m glad it doesn’t force its way into the episode because I like Britta better when she’s not being made to look ridiculous.

When Britta takes over, the power goes to her head as well, which is a logical and human reaction — although she thinks she’s doing good by punishing the fives rather than using her power to put people down. There’s a fine line between the two.

Luckily, Jeff steps in and gets everyone to delete the app before the MeowMeowBeenz craze spreads much further. It’s a logical ending, if a tad uninspired — Jeff always saves the day — but it means the campus can go back to normal and no one ever has to talk about MeowMeowBeenz again.

Annie was more lost in the background than any of the other characters, but at least she got to have some good character moments this week. I particularly liked seeing her as a kind of personal assistant to Shirley because it played off of Annie’s fondness for organization and planning, and since she was spying on the school, it threw in a dash of her sneakiness for good measure.

Abed didn’t have a lot to do this week, either, but he had some good character moments as well. He’s initially excited about MeowMeowBeenz because it “takes everything subjective and unspoken about human interaction and reduces it to explicit, objective numbers.” This allows Abed to do things like make small talk, and it’s fun seeing Abed happy in a situation where a lot of other people would be miserable. In the end, however, he is underwhelmed by life as a five, and when everyone becomes a one in Britta’s world, Abed is excited that he’s “like everyone else,” which seems like something Abed would like.

Overall, “App Development and Condiments” was a largely solid episode that spent time with characters we already know and let us see what those characters would do in a situation where ratings become more important than anything else. While I don’t think I’m likely to watch this episode multiple times, it wasn’t a bad way to spend half an hour.