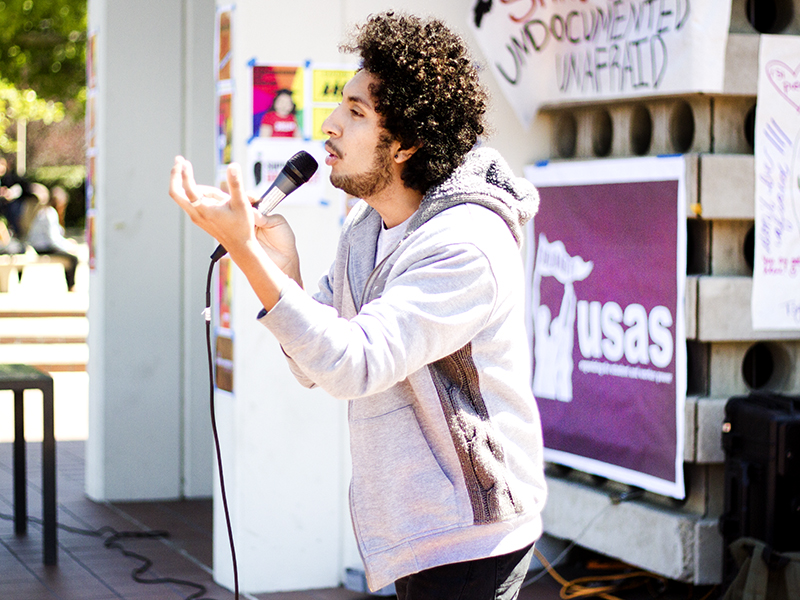 One microphone was all it took to catch the attention of roaming students by the Bell Tower last Thursday afternoon. The sun peeked out from the cloudy sky and over Providing Opportunities, Dreams and Education in Riverside (PODER). PODER hosted “Coming Out of the Shadows,” a presentation raising awareness of undocumented students in the U.S. and UCR. As their first presentation made at UCR, “Coming Out of the Shadows” provided insight about the students who meet the requirements set forth in AB 540 and the tremendous help AB 540 has provided. AB 540, a way that many undocumented students can achieve a college education, created a new way to help undocumented students pay and attend California universities. But until AB 540 was signed in October of 2001, students struggled with every border that was jumped to achieve the success that everyone deserves.

Posters covered each side of the Bell Tower, silently chanting “Undocumented and Unafraid.” Once PODER president Ana Coria started speaking, however, nothing was silent about it. She provided the backstory of the organization and the cause itself. On March 10, 2010 the youth of Chicago, Illinois stood in front of the federal immigration office building, declaring “Undocumented and proud,” creating National Coming Out of the Shadows. PODER began in 2008 at UCR to educate and empower the student body for justice for the community. With that said, Ana introduced herself as “undocumented and unafraid.” She shared her story of crossing the border at age one, asking, “Why am I here?” She went most of her life not knowing what “undocumented” meant or how it pertained to her. As she applied for college, forever, reality set in when college would not be possible without documentation, but Deferred Action for Childhood Arrivals gave her the chance to become the political science major she is today.

The sun slowly crept out from behind the Bell Tower to warm and shine light on the other undocumented students who shared their own courageous stories. From remembering their scratchy throat while crossing the border with no food or water, to the guidance counselor who apologized for the lack of future that was predicted for the student, these stories touched each person in the crowd. Many people passing by stared at what caused the emotional reactions but stopped with the uproar response.

Each member of PODER’s sole purpose was to strive for the success their parents intended when they made the decision to risk their life to come to the land of freedom. And now as successful students, they use their success to empower the community, starting with the strongest one: UCR. The organization not only opened the eyes of others, but also gained allies who joined the organization in the process. Clara Carveo, third-year English major, did not identity as an AB 54O student when she joined, but remains an ally for those who do. Secretary in the CSP organization, Clara acknowledged the courage of each student before her and stood with them to look in the face of diversity. She, and many more, were not affected by the California DREAM Act or Deferred Action but realized how both helped so many lives prosper. They urged more to get involved to learn what the word “immigrant” really means.

PODER started as an organization to provide financial aid and resources for undocumented students who to attend college. As of this year, however, they have now focused on the mental health aspect, helping each get through their own individual struggle. Much of the trauma many were put through derived from the classroom. Because professors cannot ask a student if they are documented or not, there is no knowing if there are undocumented students in the class, and thus faculty and peers have little reservation in discussing the “privileges” these undocumented students have had by taking “our” financial aid, sitting in “our” seats or abusing “our” system. All the while these students sit in the back of the classroom, knowing the zero financial aid given because of the lack of papers and knowing the amount of homework that they have had to set aside to work more hours to earn that chair they deserve. Listening to the speakers reminded me of the phrase that everyone has a cross to bear, and that we can not pretend to know someone’s story until it has been lived.

More and more students submerged themselves in these courageous stories that were told. Tears dried and clouds dispersed. The sun was a full spotlight for these students who came out of the shadow. Nothing will hide the undocumented and unafraid any longer.