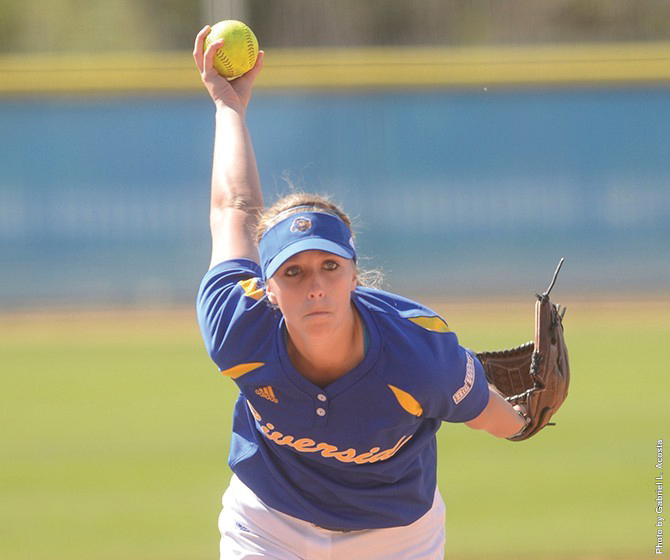 A three-game series against the Cal State Northridge Matadors got off to a rough start for the UCR softball team Friday, as they were shut out by the visiting Matadors, 8-0.

The match remained scoreless in the first two innings, but Northridge was able to get on the board at the top of the third inning when Taylor Nate’s single to center field allowed a runner on third to reach home. Subsequently, Nate stole second base, leaving runners on second and third. A double by Katie Hooper put both runners at home, increasing the margin to 3-0.

The Matadors kept piling on in the fourth, scoring two runs off a Taylor Glover double.

In the fifth and sixth innings, the Highlanders managed to keep Northridge off the board, but still could not score a run of their own.

With the coming of the seventh and final inning, the Matadors drilled the final nails into the Highlanders’ coffin when they scored three runs to open up a commanding 8-0 lead over the helpless home team, enough to secure victory and pitch a shutout on the road.

In the second match of their back-to-back on Friday, the Highlanders fared a bit more competitively, but were still unable to top the visiting Matadors.

After a scoreless first four innings, the Highlanders got on the board first after a Haley Harris sacrifice bunt allowed Kris DeAnda to reach home for the first run of the match. Natalie Sanchez, the next batter up, subsequently hit a double that sent another Highlander to home plate, giving the Highlanders an early 2-0 lead.

Just a half inning later at the top of the sixth, the Matadors replied with their first run of the game when Taylor Glover reached home after a sacrifice fly by Taylor Nate.

With the lead cut in half at the top of the seventh, the Matadors found themselves in prime position to steal one away from the Highlanders. A throwing error by UCR third baseman Taylor Wright allowed a Matador runner to score and tie the game. Not too long after, a Madalyne Handy bunt sent Kaitlin Toerner home to give the Matadors a 3-2 lead.

At the bottom of the seventh, it appeared as though the Highlanders were ready to come from behind with runners on second and third, but three straight outs vanquished any hope of a comeback and allowed the Northridge Matadors to secure victory.

After losing two straight to the Matadors on Friday, the Highlanders hoped that Saturday’s final match of the series would bring better fortune. However, the Matadors once again topped the home team, completing a three-game series sweep.

The match got off to a quick start Saturday, with the Matadors scoring the first two runs at the top of the first inning. In the next half-inning, the Highlanders scored when a Natalie Sanchez single allowed Dionne Anderson to reach home from third base.

At the bottom of the second, Stephanie Tickemyer reached home with help from a Sommer Wilson single, tying the game at two runs apiece.

After scoreless third and fourth innings, the Matadors’ offense caught fire, scoring two runs in each of the fifth and sixth innings. The Highlanders tried to keep pace but only came out of the carnage with a single run.

During the game, Anderson broke the Big West record for stolen bases in a single season. She now has 41 steals on the season.

Friday’s and Saturday’s losses drop the Highlanders to a paltry 2-10 in conference play (good enough for worst in the conference), and 21-24 overall. Next week, April 26, the team heads to Davis to take on the seventh-place Aggies.