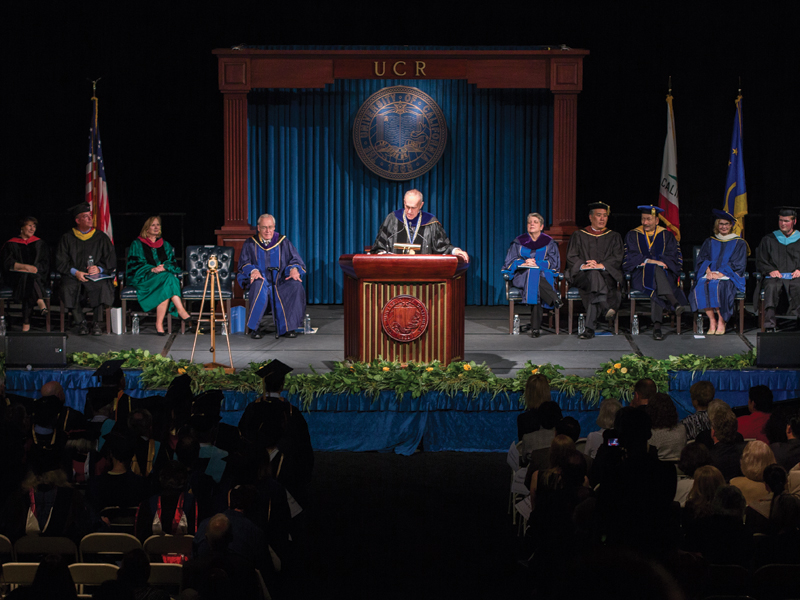 Lead by the UCR Bagpipe Band, a procession of regents, faculty and distinguished administrators, welcomed Chancellor Kim A. Wilcox as the ninth Chancellor of the University of California, Riverside on April 24. Last in this line was Wilcox himself, who just prior to beginning his walk down an aisle made up of the now-seated dignitaries was approached by a student. The student’s request: a selfie.

In the midst of one of the most formal events of his academic career, Wilcox hesitantly looked up as if to see whether or not UC President Janet Napolitano — only two people ahead of him in line — was looking just before he posed for a selfie with third-year student Reem Blaik. The crowd sitting toward the back of the Student Recreation Center responded with laughter as the procession continued.

Wilcox received a phenomenal introduction from the community and UC family including the Chairman of the UC Board of Regents Bruce Varner, U.S. Congressman Mark Takano and ASUCR President Sai Patadia, among others during Thursday’s ceremonies.

On behalf of the students, Patadia praised Chancellor Wilcox for his “genuine curiosity and interest of the students” and recalled in his first memory of Wilcox, his “infamously hearty laughter.”

After receiving words of inspiration and the UCR Chancellor’s Medal from UC President Janet Napolitano, Chancellor Wilcox welcomed those in attendance, declaring, “Each of you is a partner in today’s celebration which of course is not really about me, it’s about the University of California, Riverside and about the enduring concept and power the research university itself.”

During his investiture, Chancellor Wilcox took the audience of nearly 1,000 in attendance through a history of UC Riverside. “Let’s start in the year 1954. I’d like to think of this as a rather big year for both me and for the campus. You see both of (us) started that year.” In a few weeks, Chancellor Wilcox will also turn 60 years old.

Wilcox further joked, “I have the dubious honor of being almost as old as the first word spoken by a professor to a student at UCR.”

Going back to the 1860s, Wilcox explained the notion and founding of the public university. In 1862, U.S. President Abraham Lincoln passed the Morrill Land Grant Act, which planted the roots for public universities. The chancellor proudly declared, “We, at the University of California, Riverside, are part of the very grand tradition.” Wilcox’s address reflected his respect for history and tradition as he continued to outline his future visions for UC Riverside.

In continuing to “write the story” of Lincoln and Morrill, Wilcox called for specific areas of growth in his investiture address, such the addition of 300 additional faculty members — about a 50 percent increase — within five years. The university reportedly has 673 tenure-track professors, according to the Press Enterprise.

“We will have the potential to lead the nation in faculty diversity just as we do in student diversity,” said Wilcox. UC Riverside is expected to grow from its current enrollment of 22,000 students to 25,000 by 2020, according to the university’s master plan. With students from more than 60 nations, Wilcox says that there needs to be a greater push to develop a globalized campus culture, with the university currently seeking to fill the position of vice provost of international affairs, according to the chancellor.

Wilcox also seeks physical expansion of the campus to the south of campus, along the 215 freeway. He announced his goals of constructing a new interdisciplinary research building, which aims to provide 150,000 square feet of space for over 60 faculty research groups.

The afternoon reception at the UCR Carillon Bell Tower that followed the investiture welcomed students and guests with a special recital from carillonneur David Christensen. Along with refreshments and peach cobbler a la mode, the reception included student entertainment from a mariachi group to a Bollywood-esque performance from the Raas Team at UCR.

One student joked to Chancellor Wilcox, “Let’s do this every Thursday?” after which Wilcox responded, “So long as you organize it!” followed by his renowned hearty laugh.