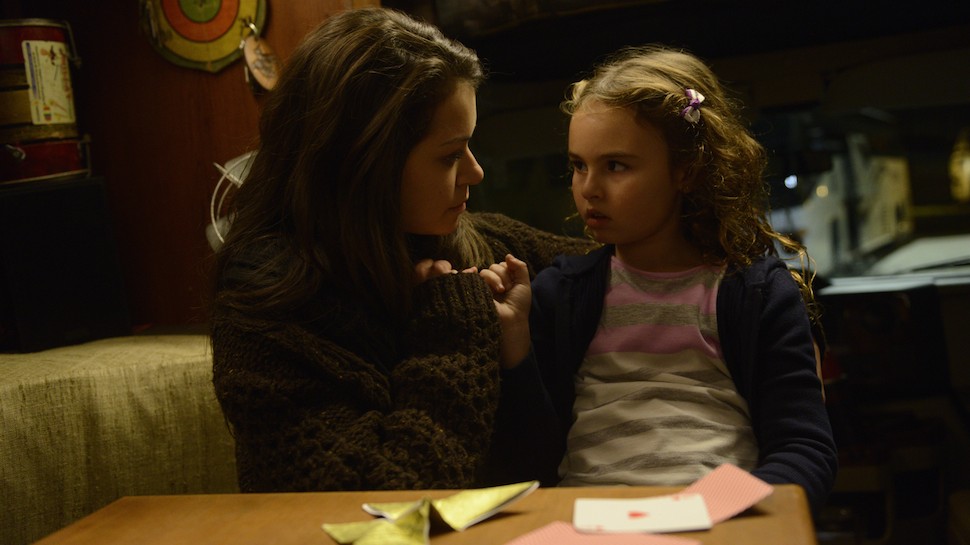 Unsurprisingly, “Governed As It Were By Chance” picks up right where the last episode left off — with Sarah (Tatiana Maslany) and Dyad lackey Daniel (Matthew Bennett) in a car crash. What is surprising, though, is who crashed into them: Kira’s (Skyler Wexler) probable father, Cal (Michiel Huisman). And he did it to save Sarah from Daniel, who is now dead by all appearances, which I suppose gives Cal a check in the good guy column.

This opening to the episode is tense and engrossing as Sarah, still rattled from the crash, tries to decide whether she’s going to shoot the police officer driving up to the crash site. With two people dead — Daniel and the cop Daniel killed last week, it’s entirely probable that Sarah would have done anything to keep Kira safe. Not until the police car drives past Cal and Sarah can we be sure that Sarah isn’t going to have to shoot or threaten anyone.

And with that problem solved, Sarah’s quick thinking takes over. She covers Daniel and his car up with branches from some nearby trees and has to hope it will take some time to find Daniel since he had already informed his boss, Rachel (Maslany), that he was coming back with Sarah. Sarah also grabs the Project Leda photo and Daniel’s phone — which will be important later — before she and Cal take off, heading back to Kira.

With Daniel nabbing Sarah last week, I thought Sarah’s flight was over and done with, but for the first half of the episode, I wasn’t sure that was the case. She, Kira and Cal spend some time driving away from the accident scene in a camper while Sarah texts Rachel updates, pretending to be Daniel bringing in a captured Sarah, to buy time on that front.

Meanwhile, Sarah heads back into the city, in spite of the police lookout, to find out what Mrs. S knows about Project Leda. Sarah doesn’t find Mrs. S, but she does look at some newspaper clippings that Mrs. S has. Apparently, Rachel’s parents — adoptive, we’re assuming — were the lead scientists on Project Leda.

With that information, Sarah decides to break into Rachel’s apartment while Rachel is out of town and find out what she can about Rachel’s background.

Sarah finds a video tape with Rachel looking like she had a relatively normal childhood. Cosima (Maslany) assumes, based on Rachel’s personality, that Rachel knew she was a clone early on, becoming narcissistic since she was the only clone who was self-aware. Based on nothing but pure speculation, I’d say Rachel didn’t know she was a clone until later in her life. Whether this will be true and will play out during the rest of season two, I hope we do get deeper insight into Rachel and why she’s so willing to be the head of the Dyad Institute that experiments on her own sisters.

While Sarah is busy figuring out what Mrs. S knows and breaking into Rachel’s apartment, a couple of problems arise. One: Daniel isn’t dead. Two: Helena (Maslany) escapes from the Proletheans.

After climbing out of the car, Daniel somehow makes his way to Rachel’s apartment and, of course, shows up while Sarah is still there. Daniel catches Sarah trying to sneak out of the apartment, and even though he’s under orders not to harm Sarah, he uses a razor to cut her ear. After the problems he’s had trying to bring Sarah in, it’s not really a surprise that Daniel wants to take it out on Sarah in any way he can. “Governed As It Were By Chance” has a lot of body horror, so the ear cutting is gruesome — but brief. We get a closeup on the ear and a lot of blood leaking out of it while Sarah screams, but Daniel is interrupted.

To understand why he’s interrupted, however, we first have to talk about what happened to Helena. Last we saw, the leader of the Proletheans, Henrik (Peter Outerbridge), married Helena and was carrying her away to do some kind of fertilization experiment on her.

When we first see Helena in this episode, she’s waking up from the influence of a sedative, so she doesn’t remember what happened after the wedding ceremony. But it was clearly traumatizing since she flinches from Henrik’s touch. After all of the trauma Helena has already been through in her life, it’s less than surprising that she chooses to run away from the Proletheans since she’s healthy enough to survive on her own. On her way out, however, she passes through the room where the experiment took place and remembers parts of what happened.

I, for one, am grateful that we don’t get a lengthy scene of the experiment on Helena. What we do get is creepy enough — half-remembered glimpses of a procedure that involves sexual violation. While remembering the experiment, Helena looks the most human that we’ve ever seen her — by which, I mean, she looks the most like Tatiana Maslany that I’ve ever noticed. Where usually the wig and Helena’s typically unusual nature mask the fact that Maslany plays this character too, Helena finally looks scared. Because she barely reacts even to physical injuries, she must be incredibly traumatized.

I’m assuming the trauma is part of what leads her to Sarah. How Helena knew Sarah was in Rachel’s apartment, however, is a mystery. But she does end up saving Sarah from Daniel — now, he really is dead because Helena slits his throat with a knife — so I’m not going to look a gift horse in the mouth.

Sarah is understandably upset to see Helena since she thought Helena was dead and Helena did just kill Daniel, but as we all know from season one, Helena just wants to be with her sister. The scene ends with Helena hugging Sarah while Sarah sobs about how close she almost came to getting seriously hurt.

Because the episode is mostly about bringing Helena and Sarah together in the end, Alison (Maslany) and Cosima don’t get as much screen time here. Normally, I’d think that would be something to complain about since I consider all of the clones main characters, even though Sarah often takes on the bulk of the plot.

However, “Governed As It Were by Chance” is so slickly moving that it would be hard to take a break for either Alison or Cosima, whose plotlines are much less action-oriented than Sarah and Helena’s. Cosima largely is used solely to aid Sarah in her search for information on Project Leda and Rachel’s parents. The only real piece of information we get on her is that her disease is getting worse, but I understand that the lab work isn’t that interesting to watch on television and that the disease won’t progress overnight. Cosima’s plotline just doesn’t have the same stakes, so it makes sense that she gets less screen time.

I did appreciate the amount of Alison plotline we did get, especially since it added an emotional undercurrent that wasn’t always as noticeable with Sarah’s work in the episode.

After her disastrous opening night in “Blood Ties,” Alison has been checked into rehab, although it’s important to note that she did agree to stay there, even if she doesn’t remember it. Because she doesn’t remember, however, Alison spends most of her time trying to get out — not with actions, as Helena did with the Proletheans, but with words.

Alison first calls Felix (Jordan Gavaris) to try to get her out, but Felix only convinces her it would be good to stay for a week or so, particularly since her husband and monitor Donnie (Kristian Bruun) won’t be there.

If there’s one thing that bothers me in Alison’s plotline, it’s the easy way she and Felix pick up their friendship, as if it doesn’t matter that Felix left Alison alone to go on the run with Sarah and that action is partly why Alison’s in rehab in the first place. I understand that Alison’s drinking and taking pills have consequences, which is the main reason why rehab is necessary, but I wanted Alison to be as angry as I was at Felix for leaving in her in the lurch. But I guess Alison needs someone to lean on right now, and if that continues to be Felix, so be it.

Instead, all of Alison’s anger gets taken out verbally on the people in rehab with her as well as Donnie, who shows up to talk to her. It’s here we get the emotional part that I was talking about earlier when Donnie gives Alison an ultimatum — stay in rehab or he can keep her from seeing their two adopted kids.

If there’s one thing that Sarah and Alison can agree on, it’s that no one can touch their children (we see this in season one) and having Donnie threaten to take her children away from her hits Alison hard. We don’t get much more from Alison in this episode since Helena and Sarah take over, but I’m sure Alison will be staying in rehab for the foreseeable future.

“Governed As It Were By Chance” ends with one final punch. While the fact that the Proletheans removed and fertilized one of Helena’s eggs isn’t a surprise by the end of the episode, there’s no getting around the fact that it’s horrifying. And now the Proletheans have their hands on something that could eventually be a child — considering that would take a while, I don’t think their plan will succeed — but nonetheless, it’s a possibility.

This season of “Orphan Black” has been darker in tone than the first season, and “Governed As It Were By Chance” has been the darkest episode of the season yet. I wasn’t entirely onboard with how the season was shaping up last episode, but this episode turned it around. In particular, I appreciated that we got some information about Project Leda — particularly the fact that Rachel’s parents were involved — without getting a bunch of new questions.

With Helena out of the Proletheans’ grasp and a promo that looks like it will feature a lot of Cosima and Rachel, I’m excited about next week already.