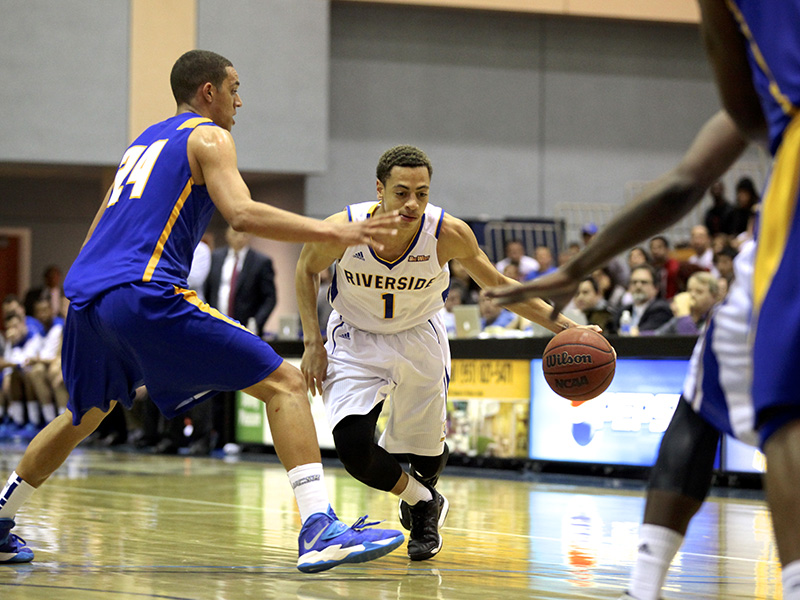 He shoots, he scores! Guard Sam Finley was a building block for Riverside’s basketball team’s success this season, but his UCR career has come to an abrupt end. Searching for a system more uptempo and suited to his playing style, freshman Finley has decided to pursue his basketball career elsewhere.

Although Finley will be leaving the Highlanders, Riverside gave Finley the opportunity to shine. He was named the Big West’s Sixth Man of the Year by College Hoops and led Riverside to victory on several occasions. Free throw after free throw, Finley connected 79 percent of the time. With basketball season coming to an end, Finley finished second on the team in scoring, second in made three-pointers, and third in free-throw percentage. Not to mention his quick ability to steal the ball, off the bench Finley was a reliable penetrator who got to the foul line during crucial moments of the game.

“I was disappointed because I do think he could have had a bright future here. As I’ve said, I thought we did a lot of good things for him, showed some growth on and off the court,” stated Head Coach Dennis Cutts. “He was going to have a big piece of the future here, but he decided he needed something different. As I’ve said, we move forward.”

It’s always disappointing to lose a player, but the men’s basketball team knows that’s just a natural part of the game. Teammate Nick Gruninger stated, “As far as replacing Sam, basketball is a team sport, and in college you are always having to replace players whether they graduate or transfer. We will move forward with the pieces we have, and add pieces to it from this year’s recruiting class. I don’t know that you just plug somebody into Sam’s spot and expect them to match his scoring numbers. It may be that we spread the scoring load around a little more.”

Looking to move forward, Cutts sees a bright future for the men’s basketball team. Riverside has already made some decisions in the off-season, signing two international players and another community college player for the 2014-2015 season.

Coming all the way from China, 6-foot-4-inch guard, Chris Tang signed a national letter of intent in April. Tang ended his season at Canarias Basketball Academy with a bang, averaging a team-high 15.5 points per game. “We are very excited! He fits everything we are about. I think it’s a unique kind of resource. I’m really excited,” explained Cutts.

6-foot-7-inch forward Robert Boezeman will also be joining the Riverside family. Coming from the Netherlands, Boezeman attracted Riverside by having the length and athleticism the Highlanders need with the future absence of Chris Patton and Lucas Devenny.

On May 16, the university announced the latest addition to the team, TJ Tisdell Jr. Tisdell was named a First-Team Junior College All-American after his season playing with John Wood Junior College. “We are excited about what TJ brings to our program and we feel he is a great fit both on and off the court,” said Cutts in an official statement. “He has been a very productive player and is coming out of a very good program in John Wood. TJ’s work ethic and winning mentality, combined with his ability to score the ball and rebound at a high level, fills a big need for our program.”

Three new additions have been signed, but there are more moves to come. Expressing his thoughts about the new additions to the team, Gruninger stated, “I’ve read a little bit about both of them, but obviously Chris Tang comes with a backstory that a lot of people are aware of. They both come from a good international program, and I’m excited to see what they can do. It sounds like they will both be able to step in and contribute right away.”

With international students and other students yet to be signed, Cutts has faith that Riverside will do great things. “This team is going to be very competitive next year.”

With the approval of everyone on the team, Cutts, who was announced as the official head coach in April, will start off his new position smoothly. “I was excited for him and his family,” stated Gruninger. “Coach Cutts is a players’ coach. He can talk to us openly, and he cares about us as players and students. He wants to put us in positions to succeed on and off the court.”

As seniors Patton, Devenny and Chris Harriel move on to bigger and better things, the Highlanders will hold their heads up high and continue to push forward.