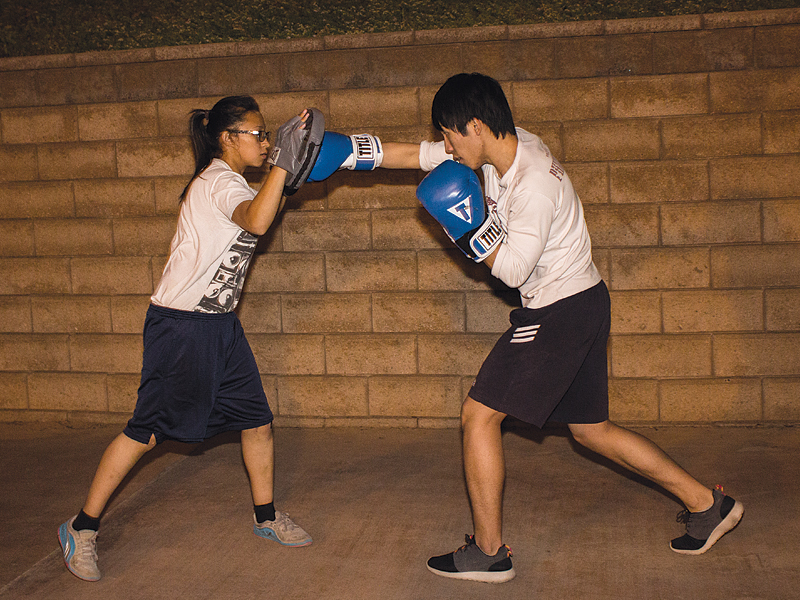 For the past two years, Highlander Gloves at UCR, the official student boxing club on campus, has trained underneath the Amy Harrison bleachers near Lot 24, but that’s about to change over the next few months.

Approached by Riverside Police Detective Mario Lopez, the UCR boxing club will be provided with boxing equipment, a ring and a brand-new gym to train in — all of which will be free of charge — and in exchange, a crop of student boxers will be tasked with tutoring high school students for 30 minutes a day, three days a week, starting in July 2014.

“It came out as an idea (between) me and another person from the police department,” Lopez said. “We were working out with my dad in a park several years ago and that’s how the idea started: How can we bring boxing, (education and self-accountability) in this community?”

Lopez, along with a handful of members from the Riverside Police Department (RPD), funded and formed the Raincross Boxing Academy (RBA), a low-cost tutoring and boxing program that promotes education, community and a healthy lifestyle for underrepresented youths in Riverside. The program will focus on boxing instruction, community service, accountability toward academics and physical fitness through the gym’s mentoring program.

According to a press release, the RPD will collaborate with local high school educators, administrators and parents to identify at-risk students who qualify for the program. “At-risk” students are categorized as those having financial difficulties or lack of interest in schoolwork, sports or physical activities.

With grants provided by the Riverside Police Foundation, which consists of local residents who fund youth programs and community outreach, RBA was able to rent out space within a building in downtown Riverside to construct a brand-new gym. Lopez says a good ring can cost upward of $7,000, boxing bags at around $150 apiece and a speed bag around $65.

Located near Third Street and Vine Street in downtown Riverside, the rented space will consist of one floor of a building with three rooms: one for the gym and another for the tutoring center, with the third room’s use still being determined. The building is owned by the City Church of Riverside.

“When you look at the building, one of the first things that comes to your mind is: ‘Wow, that’s right out of a Rocky movie,’” Lopez alluded, and said that the building was once an older warehouse and is located near railroad tracks, all of which gives the vicinity a more “traditional” feel.

A membership fee of $30 per month will be charged to the public for using the gym and all proceeds will go to support overhead operating costs and any additional revenue will go to scholarships for participating high school students in the tutoring program. With the goals of enhancing youth development, Lopez emphasized that high school students accepted into the program (about 20) will be granted free membership, in addition to all UCR tutors.

Lopez said that he was initially “surprised” to hear that UCR had a boxing club, but after reaching out to Highlander Gloves around Jan. 2014, he was ultimately “impressed” after the first meeting. “The club was a lot more organized than I’d see in a traditional boxing gym, so it impressed me talking to them,” he expressed.

Pitching the idea to Highlander Gloves President and certified USA boxing trainer Celia Lagunas, she expressed excitement, but understood the challenges of obtaining gym space and of creating a tutoring program. The club, which is in charge of developing the RBA’s tutoring program and part of the training routine, will emphasize community and social involvement.

Major obstacles facing club members will include scheduling tutoring times between student boxers who may feel an additional obligation alongside their academics. Student boxers are not obligated to tutor and tutors are not required to be members of the UCR boxing club. Lagunas said the ultimate goal is to create a college pathway to Riverside youths by introducing them to mentors, creating a support system for them and showing students a better life.

“(The academy is) providing a computer lab to help high school students and for us to teach them different ways to use a computer in order to get into college,” Lagunas said. She hopes to get at least 20 Highlander Gloves members to participate in the program.

She adds that the new location may be a better alternative for the UCR boxing club, which is limited in terms of resources and spacing, noting that individuals are not allowed to hang boxing bags underneath the bleachers.

UCR’s Competitive Sports Program Director Kevin Martin says the boxing club ranks as a tier three club or emerging recreational sports club and falls under the competitive sports umbrella. “The club is already a team, they just have to join a national governing body for boxing,” Martin furthered. “They also would have to hold insurance from that national association for every member.”

Lagunas hopes to create an amateur boxing team one day that can officially compete with other universities by holding tier one status, which would allow the club to be considered an intramural sport. At the same time, tier one would also allow the boxing club to alter its title to reflect being a UCR team rather than a team that is simply based out of UCR. As of now, Lagunas feels that partnering up with the RPD is a step in the right direction because it would allow UCR student boxers to train with professional coaches and equipment.

“We all know that boxing is not a one-man sport because … you do need a support system in order to be the best,” said Lagunas. “The thing is, for us, this would be the best thing because we’re not only making a connection with the community, but it would help us build an amateur team or a boxing team.”

A few years back, combat sparring was banned on campus by the UCR administration because the mixed martial arts club allegedly did not use the proper safety equipment when sparring, according to Lagunas. As a result, the campus boxing club has been forced to travel to off-campus gyms in locations such as Temecula and San Bernardino to train.

The RBA will also function as a collaboration between the RPD, the UCR boxing club, professional trainers and boxers for the first year, but the academy also hopes to reach out to other Riverside colleges in the future. Additionally, the RPD is planning to build up an amateur boxing team, as well as oversee daily operations of the boxing gym and the training of its members.

A few of the professional boxers (all raised in Riverside) volunteering for the program will include: Chris Arreola (36 wins, 6 losses) and Josesito Lopez or “Riverside Rocky” (32 wins, 6 losses), who are both ranked in the top 10 in their respective divisions in the United States.

The RBA will draw on financial sponsorship from the local community to support the initiative and is seeking nonprofit status, which will provide them with the perks of having greater access to local grants and exemption from paying local, state and federal taxes.