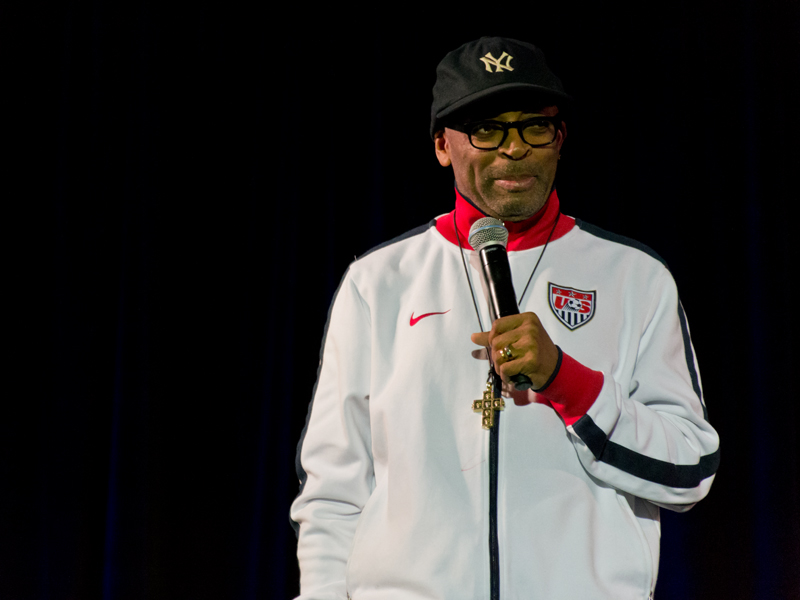 Spike Lee is a force to be reckoned with. The outspoken film director came to UCR to shed some light on his struggles and successes in the fast-paced entertainment industry. The Student Recreation Center was full of students and other individuals on Thursday night hoping to be inspired by the man behind masterpieces such as Academy Award-nominated film “Do the Right Thing” and the thought-provoking movie “Bamboozled.” Lee’s unique style of creating stories and his ability to fearlessly tackle controversial subjects has allowed him to become a trailblazer for many upcoming filmmakers, especially African-Americans. Well-versed on Lee’s movies, I couldn’t deny my excitement and looked forward to an evening that would be nothing but memorable.

Doors opened at 6 p.m. and guests made their way to their seats. We were entertained by old-school hits blaring from the speakers near the stage while we waited for the speaking engagement to begin. The event began an hour later and Lee was met with a standing ovation as he made his way to the stage. The rows of seats set up in front of the stage were filled with onlookers, with some attendees having to be seated in the bleachers of the basketball court. “Y’all are on the quarter system, huh? That sucks,” Lee joked before he began his speech. The crowd laughed while settling in to hear about Lee’s beginnings. “How many of you know exactly what you want to do?” he asked. A few audience members raised their hands and Lee went on to explain that he had no idea what he wanted to do when he started college. Without a clear vision, he had little drive and ended up doing poorly in school. “It wasn’t that I wasn’t smart, I just wasn’t motivated,” Lee explained.

One summer, he received a camera as a gift from a friend and everything changed. It became a hobby out of boredom and by the summer’s end, he realized he had an entire documentary. When he returned to school, a teacher went above and beyond to help him realize his untapped potential. “This man had a family but he would stay after school just to help me,” Lee said. He went on to explain the importance of a strong support system. “I’m going to say something twice: Parents kill more dreams than anyone,” Lee emphasized. He explained that parents often want the best for their children. Unfortunately, they consequently tend to overlook their child’s talents to persuade them to pursue a career that will guarantee a substantial amount of money. The audience chuckled and nodded their heads in agreement while Lee went on to explain how thankful he was for his aforementioned teacher, as well as his grandmother, who had nothing but faith in him throughout his entire career.

As college students, it’s often a struggle to follow your dreams when you’re worried about your financial stability in the future. But according to Lee, the worst thing you can do is pick a college major simply because you feel it will earn you a big paycheck. “People with hella money in the bank kill themselves all the time,” Lee said. “That should tell you something.”

The arts can be number one on the “Things You Don’t Want to Tell Your Parents You Want to Pursue” list. Recognizing this, Lee encouraged students to follow their passions nonetheless. In addition, he reiterated that students need to be steadfast in their pursuits. “Nothing is going to be handed to you,” Lee said. He admitted that he believes our generation wants results quick and easy, without putting in the necessary work to achieve them. “You’re not going to be standing somewhere and just get discovered, that stuff doesn’t happen,” Lee said.

Lee made it clear: Don’t let anyone rain on your parade. This saying may be corny but it’s a universal truth and Lee seemed to agree. He encouraged the audience to drop anyone in their lives who reeks of negativity and make the most out of negative situations. “You must turn negativity into positivity,” Lee stated. It’s hard to succeed when those around you convince you to stop trying before you even start. Getting rid of poisonous people in your life may be hard but according to Lee, it’s something that must be done.

Lee made a few closing remarks and then asked for the house lights to be turned on to get a Q-and-A going. Fans jumped out of their seats and made their way to a microphone in front of the stage to get personal advice from the renowned storyteller. Inquisitors ranged from aspiring filmmakers to pharmaceutical majors. When someone asked why he’d let people like Tyler Perry become the frontrunner in black film, Lee met the questions with humor, exclaiming, “What do you mean ‘let’? I’m not the all-powerful Oz.” He recounted his experiences working with actor Denzel Washington as well as commenting on everything from recent events in sports to his opinion on USC’s film program.

The night was filled with laughs and valuable life lessons. Follow your dreams. Turn negative energy into fuel; use it to propel yourself further, and never let the opinions of others deter you from your path. Lee’s message rang loud and clear, leaving students with hope and excitement for the future as we end this school year.