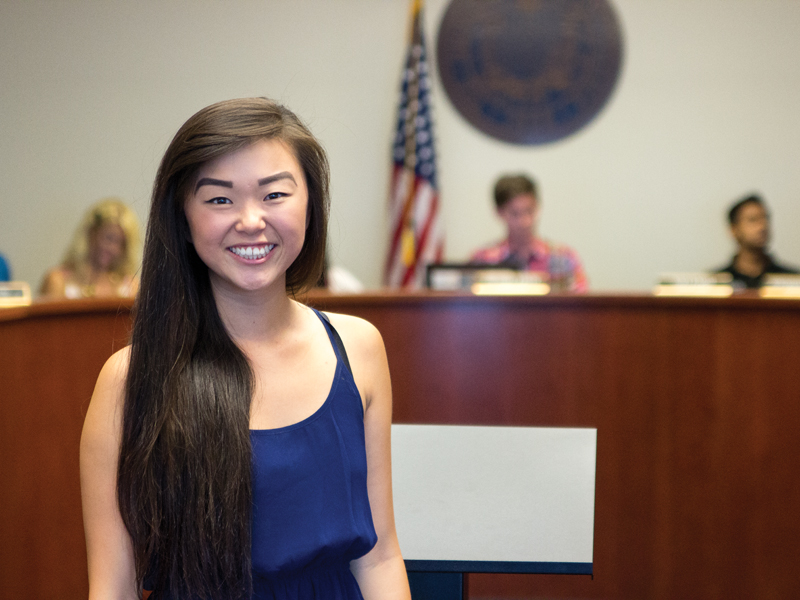 The ASUCR senate of 2014-15 has selected Iris Jiang as the new vice president of finance to oversee the senate’s budget allocations and delegation of student funds for the upcoming academic year. Despite initial concerns about her experience on the Judicial Branch, the third-year business major with a concentration in finance was approved through a secret ballot vote of 7-5-1.

Jiang’s nomination, according to ASUCR President Nafi Karim, was considered due to her high GPA and prior leadership experience through her sorority and off-campus work. “Based on my visions for ASUCR, I thought she was the best fit,” Karim explained. Her prior appointment to a UCR office in the Judicial Branch caused some doubts about her leadership, as it appeared that she had not served enough throughout her appointment.

“As I understand it, you were appointed for a one-year position (as a justice), but the one year wasn’t fully met,” Executive Vice President Michael Ervin clarified.

As the ASUCR Constitution states that the vice president of finance must have one year of experience in ASUCR as a senator, executive cabinet member, or justice, this experience was integral in choosing the best candidate. Jiang said that she was “unsure” of how long she was a justice for, as she did not play an active role in judicial deliberations.

According to Vice President of External Affairs Abraham Galvan, the Judicial Branch was relatively disorganized and their duties were not clearly defined at the time of her nomination. “She did serve one year, regardless of how much she was involved in (the Judicial Branch),” Galvan attested.

With uncertainty lingering around the candidate’s past experience, Senator Akeem Brown made a motion to suspend the decision of Jiang’s appointment. The motion was denied by Ervin, who stated that only the Judicial Branch wields the power to suspend a candidate’s nomination.

However, as none of the other candidates were present at the meeting, the one-year requirement was ultimately waived in accordance with the Elections Code. Past senate meeting minutes reveal that Jiang was nominated as a justice back in 2012. Karim, Ervin and Galvan all ran under the same political party, [YOUR]SIDE, as Jiang identified with for the 2014-15 elections season. Approved by the senate, Jiang will succeed Janice Tang as vice president of finance.