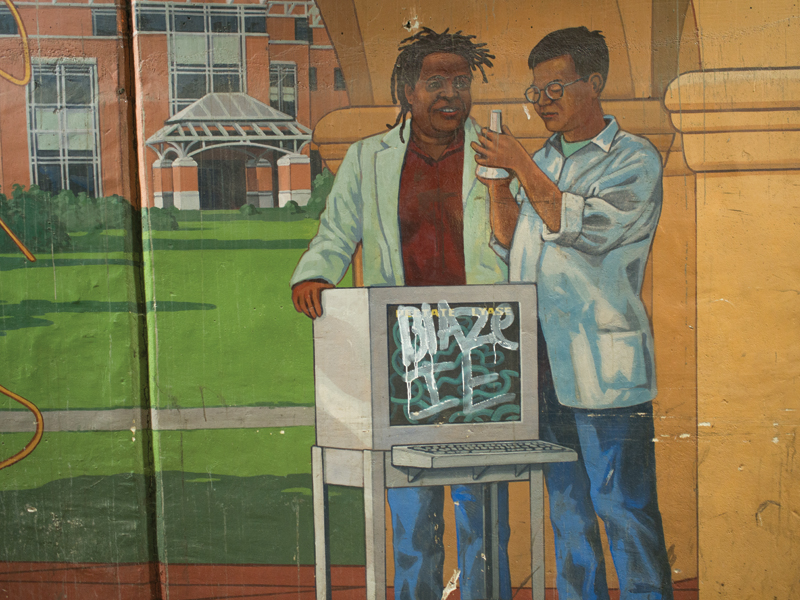 It’s something that every Highlander will pass by at least once in their university career — the UCR Mural under Highway 60, which has made a particular impression on former ASUCR Senator Shadi Matar. As Matar came from his classes at the University Village theater, it dawned on him that he wanted to see something more representative of the UCR he was leaving behind, which is why he set out to repaint the 2001 mural over the past winter and spring quarter of the 2013-14 academic year.

“It’s pretty interesting,” Matar said, referring to the mural’s design. “(There) were pictures of hydrogen cars and pictures of (older UCR) chancellors … and things that don’t show what UCR is doing right now. Also there’s a bunch of graffiti on it … so if we can’t change it, (we) might as well get rid of the graffiti.”

Serving as a welcoming portal to both the city of Riverside and UCR, the 16-foot-tall mural was constructed along University Avenue with a price tag of $73,000 provided by city officials and the Gluck Foundation, a private foundation dedicated to supporting art, dance, theatre and music in local communities. By 2001, the Gluck Foundation had donated $2.4 million to making the arts more accessible to the Riverside community.

The gateway mural, initially made possible with the collaboration of UCR officials, the Gluck Foundation, California Department of Transportation (Caltrans) and the city of Riverside, was maintained during its first year, but the upkeep stopped soon after due to lack of funding. Stonewalled by insufficient documentation of the mural from campus departments and bureaucratic processes in the city, Matar realized that his goals of revamping the mural would remain incomplete.

“There’s no clear records of who owns it,” said Matar. “No directions were left behind on how to maintain the mural.”

Serving as the College of Humanities, Arts and Social Sciences (CHASS) dean prior to the mural’s erection, Carlos-Velez Ibanez explained that the mural project came out of the CHASS department to bring the arts to the community and further represent the diverse community in the university. Ibanez also played a crucial role in developing a series of proposals to bring more art on campus, including changing the name of the college to include “arts” and developing the Fine Arts Building.

“In terms of the murals, there were no arrangements made for their support after their completion in (2001) and after I stepped down as dean in 1999 my oversight ended as well,” Ibanez said in an email. “What has to be understood is that the murals themselves are not just a historical artifact but rather my attempt (to) create a tunnel of art from the university to the broader communities.”

Efforts to renovate the gateway also seem further hindered by the relationship between the university and the renowned world artist behind the gateway art piece, John Wehrle.

“While I applaud efforts to repaint t UCR mural, I think there would be considerable difficulty, as the university, against my recommendation, made me apply a polyurethane clear (anti-graffiti) coat over the finished work, which was painted with Keim silicate paint,” Wehrle reported to the Highlander. “This is not a removable varnish and paint will not adhere to the coating.”

In order to remove the coating, Wehrle said it would probably require “sandblasting the entire thing and starting from scratch.” He explained that the art piece was intended to grow over time, referencing the notable arches extending throughout, but said, “It looks like it could stand a good cleaning.”

Matar adds that repainting the mural will require approval from multiple sources, such as the city of Riverside, Caltrans, along with specific permission from UCR officials: Chancellor Kim Wilcox, a university dean who wants to take on the project and a public arts committee (which hasn’t existed since 2007) which must be organized to approve all art on campus.

Margie Haupt, manager of Riverside’s department of arts and cultural affairs, informed that there would need to be additional paperwork and permits approved through the city and Caltrans to make any changes to the mural, since it falls along city grounds and may affect traffic in the area.

With limited visible artwork on campus, Matar desires to see more art pieces beyond the UCR Mural and the giant, periscope-like orange next to Humanities (which he was told broke upon installation). “For example, the Scotty on a Bench, that’s a piece of art and that makes people happy to see and take pictures next to,” he said.

“This campus is deprived of art and art can make a huge difference in someone’s day,” reasoned Matar. “There’s no art on this campus and it makes us look like an industrial complex rather than a school.”

Sharing a similar viewpoint to Matar, current CHASS Dean Stephen Cullenberg expressed that he is working with a donor and the chancellor to bring additional outdoor art to campus. In reference to the mural, Cullenberg confirmed that there may be limited records of its past erection.

“I don’t know who owns the mural, in the sense of who is responsible for its upkeep. In the meantime if ASUCR were to pass a resolution requesting an upgrade of the mural, I would think that that might matter a lot,” he said.