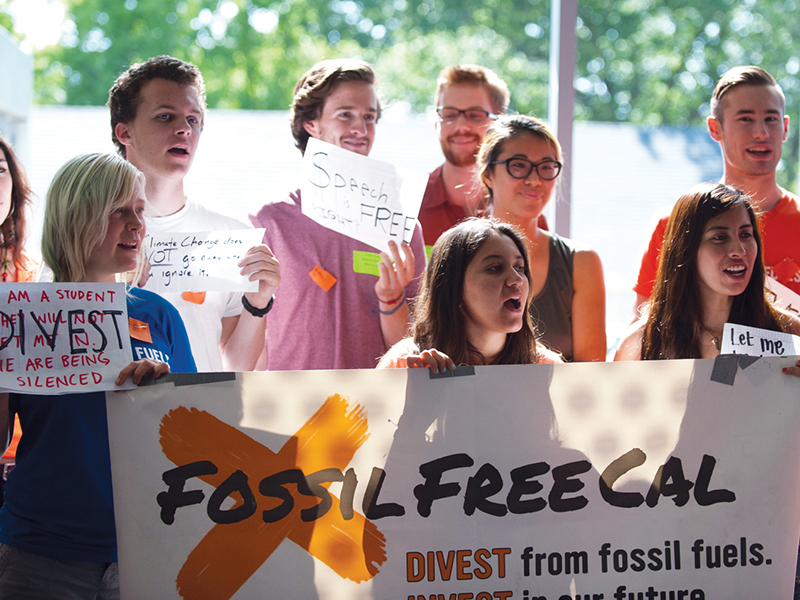 The University of California Board of Regents voted during their last meeting to allocate $1 billion in UC assets to environmentally sustainable investments as part of the university’s commitment to the environment, while facing criticism from student groups for not divesting its financial holdings from the fossil fuel industry.

“Today’s announcements show the very real commitment of the University of California to invest our human and financial assets in finding solutions to global climate change,” UC President Janet Napolitano said in a statement.

Student attendees at the regents meeting praised the investment, but criticized the Task Force on Sustainable Investing, the group that made the recommendations, for not doing enough to combat climate change. Many of the students were members of Fossil Free UC, a student campaign organized by the UC Student Association.

“I think it is hypocritical and irrational for our UC system to support an industry which is contributing to the destruction of the futures we are all working so hard towards as students,” said Sustainable UCR co-president Tracey Walters in response to the regents’ decision.

The task force report recommends that the UC “Evaluate all strategies for achieving ESG (environmental, social and governance) goals as soon as practical, including whether to use divestment.” Previous versions of the report included stronger language against divestment, stating, “The majority of the Task Force concluded that divestment in and of itself would not meaningfully impact climate change.” The section was removed after student pressure.

Members of the task force maintain that the recommendations do not rule out divestment, and the final report emphasizes further debate, stating, “The Task Force encourages the continued discussion of these ideas at the President’s Global Climate Leadership Council.”

Victoria Fernandez and Alden Phinney, the two student members of the task force, asserted at the regents meeting that students were largely shut out of the creation of the final report. “Student participation was treated largely as a nuisance,” Fernandez said. “I am disappointed that the UC’s institutional mechanisms, such as the task force, did not adequately address student concerns, faculty concerns and alumni concerns.” Both were the only two members of the task force to oppose the final list of recommendations, and are also members of Fossil Free UC.

The push for divestment at the university-wide level comes after the undergraduate student governments of at least eight UC campuses have stated support for the divestment campaign, as has the UC Berkeley Faculty Association. UCR’s undergraduate student body, ASUCR, expressed its support last academic year when it unanimously passed Senate Resolution 5. The resolution expressed support for the divestment campaign and announced that ASUCR would withdraw its financial holdings in the fossil fuel industry.

Napolitano has sought to make sustainability a key hallmark of her tenure as UC President, announcing last November that the UC hopes to be carbon neutral by 2025, and the 11-member Task Force on Sustainable Investing was formed in June to further that goal. Earlier this month, the UC also announced a partnership with Frontier Renewables to provide over 200,000 megawatt-hours’ worth of solar-powered electricity to California’s power grid annually, starting in 2016. The average household used about 10 megawatt-hours of electricity in 2012.

The UC holds $91 billion worth of investments, of which the $1 billion in sustainable investments will be a part. The UC also maintains another $10 billion in financial holdings in the fossil fuel industry.