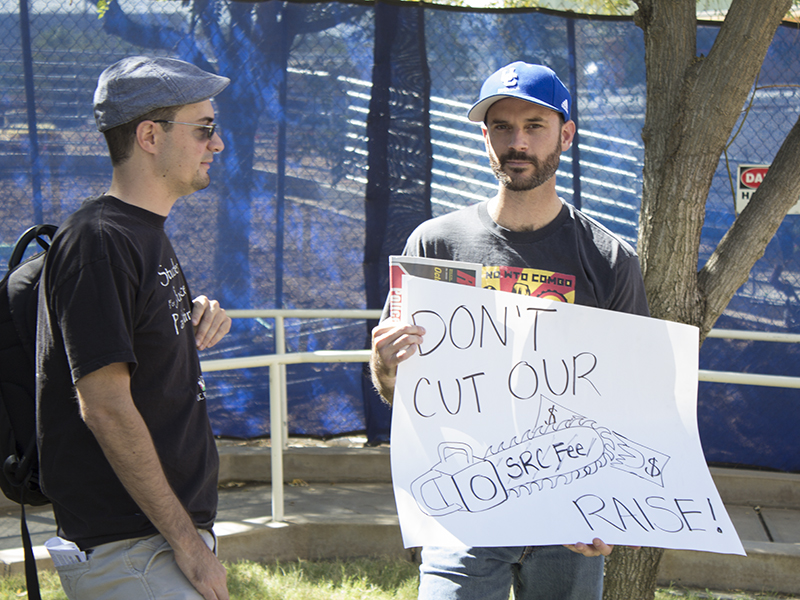 A small protest occurred at the grand opening of the newly built UCR Student Recreation Center (SRC) South last Friday over hikes in gym membership fees, which will increase from $59 per quarter to $208 per quarter for all UCR students, effective fall 2014. Led by United Auto Workers (UAW) 2865, a union chapter consisting of UCR readers, tutors and teaching assistants, protesters argued that the additional fees were too high and that they should be given an option to opt out of paying for the new gym.

David Chavez, a third-year doctoral student in the history department and UAW member, argued that the additional fees were “exorbitant” to him. “Being a parent, I have zero access to this place (because) there is no child care provided. However, if I were to buy gym membership at LA Fitness or 24-Hour Fitness, they do have child care and so do other gyms and recreational centers,” he said.

With funding approved through a 2010 student referendum, SRC South is the university’s second gym and seeks to ease the burden of an increasing student population, which has doubled in size since the first gym (now known as SRC North) was built back in 1994. The total cost of the new gym is $52.2 million, which will be paid for through student fees over a 30-year period. Under UC policy, 25 percent of the fees collected from the referendum ($37.25) will be dedicated to financial aid for undergraduate and graduate students.

Historically, UCR students have paid $59 per quarter for the original SRC facility. With the finished construction of SRC South, students are now expected to pay an additional and separate recreational fee of $159 for the new gym as a result of the passed referendum.

A Facebook community page entitled, “UCR Students vs. Rec Fee,” was created back in Oct. 2013 to contest fee hikes associated with SRC South. Despite failed attempts to place a referendum on the ballot last year, the page administrators have created a petition encouraging the UCR administration to provide students with an opt-out option for the additional mandatory fees.

“Give us options,” reads the community page. “If we don’t want to use (the new gym) then we shouldn’t have to pay $149 extra, but since we already pay $59 per quarter, we should still be able to use the original facility.

Due to student pressure back in August, the university permitted a temporary, two-month extension for graduate students to pay the additional gym fees for fall quarter. The extension, UCR Registrar Bracken Dailey explained, is due to “a lag between when (graduate students) receive a portion of their fall graduate financial support and the deadline to pay fall fees.” Some graduate students do not receive their initial stipends until November, Dailey furthered.

Opponents of SRC South also contended that the gym fees may potentially increase to cover the accumulating cost of rising interest rates in the future; the Recreation Facilities Governing Board (RFG), an advisory board in charge of overseeing SRC functions, would first need to make a recommendation to the UCR chancellor prior to implementing any potential fee increases.

ASUCR Vice President of Internal Affairs Fernando Echeverria reported that after collaborating with the RFG Board this summer, it is now mandatory to have an ASUCR member attend their board meetings. “It is too easy for students that are leaving the university to push fees onto students who are just coming in,” he explained. On the other hand, he also expressed that he favored the SRC South as a facility that offered more space and equipment for UCR students.

Despite some contentions over the SRC South, UCR student Paula Venegas Albarez acknowledged the high fee increases, but felt the new gym was a good opportunity for students to stay fit. “I think that it’s worth it because it encourages us to keep exercising (and) to keep your mind and body healthy. We’re already paying for it, so might as well take advantage of it,” she said.

Working during the grand opening of the new gym, SRC South employee Sabrina Perez described the new facility as “top-of-the-line” and said, “I do think (the gym costs) a lot of money, but I think the second that people come in and see everything that we’re doing, you realize that … ‘Wow, this is a really amazing rec center.’”

Some major features of the SRC South include: a 237,000-gallon pool, which contains both lap and recreational swim, in addition to a vortex and current channel; a sand volleyball court outside; a scenic indoor track; upstairs cardio equipment with built-in screens to watch movies, shows or to connect via phone; as well as a boulder and rock climbing wall.

Other impacts of SRC South