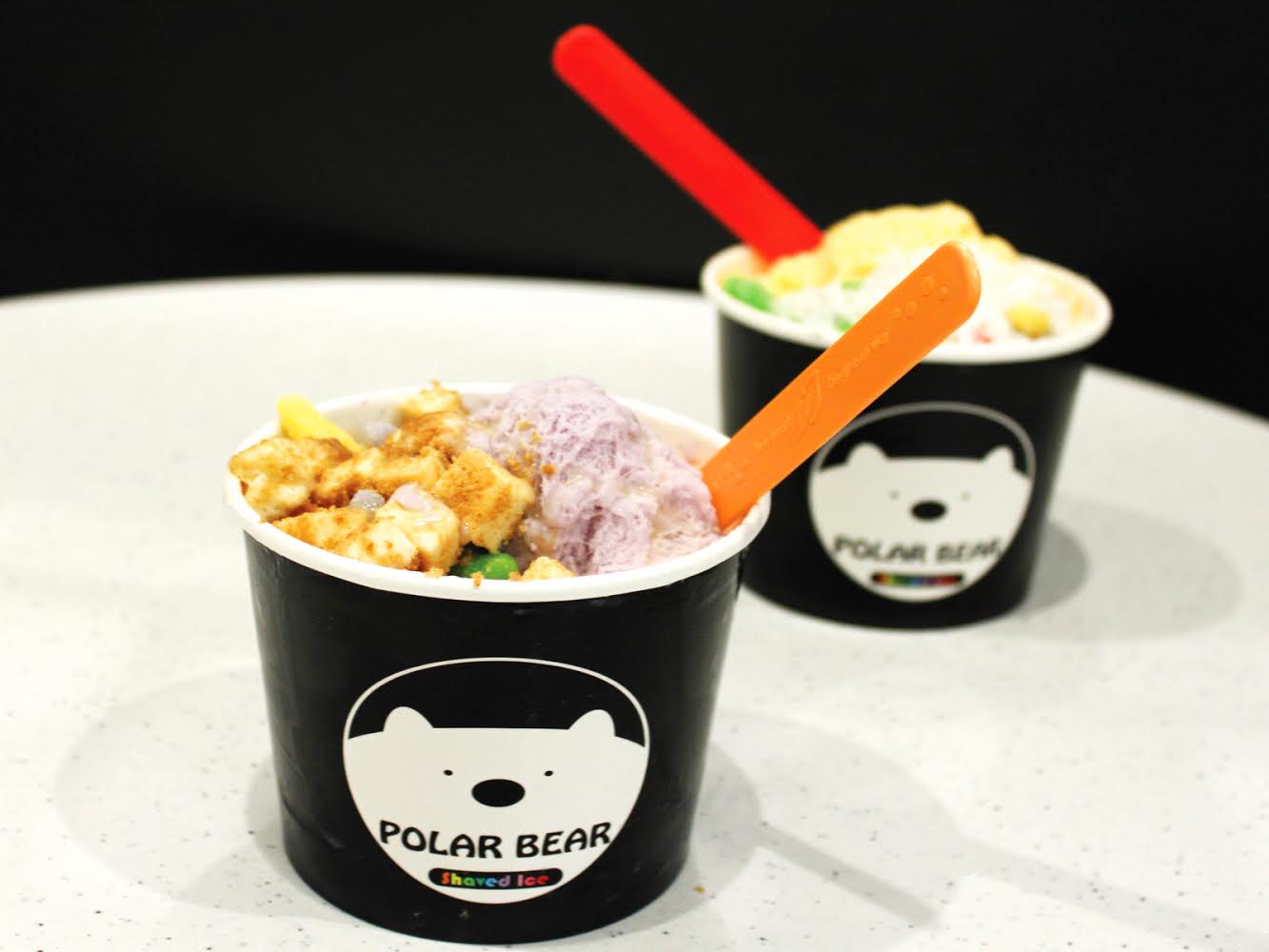 I arrived at Polar Bear Shaved Ice at 9 p.m. and I noticed that they were open from the early afternoon to 11 p.m. I also noticed that there was a bunch of graffiti scratches already on the glass windows — didn’t this place just open recently? There was also a chalkboard sign boasting all the 12 flavors that Polar Bear Shaved Ice has to offer. What immediately caught my eye was the unique shaved ice flavors such as papaya, coconut, honeydew, banana and black sesame. They also had the more well-known flavors such as vanilla, chocolate, green tea, mango, strawberry, taro and Thai tea.

I definitely looked forward to trying some of the uncommon flavors. As a frequent shaved ice eater, I have had my fair share of shaved ice, ranging from hot spots back in my hometown of Rowland Heights to the ones at Boba Tea House and Ten Ren’s Tea Time. The biggest difference so far would have to be the greater variety of flavors that nobody else had.

As I walked in, a chorus of welcomes and techno-house music greeted me and I saw Halloween decorations surrounding the minimalist black-and-white interior, with a TV mounted on the wall. A few people would get takeout but other than that not many people seemed to stay longer than they needed to. The interior gave off a really modern and clean vibe, which I liked.

It would be $4.76 for a medium and $5.25 for a large, with free unlimited toppings and one free drizzle (extra drizzle and toppings were $0.50 more); it seemed pretty reasonable for unlimited toppings since they had such a huge selection including pop rocks and different mochi flavors.

However, I realized very quickly that the flavors I had wanted to try were not even available. Post-it notes covered a good portion of the blackboard and they only had the more popular flavors including mango, green tea, vanilla and taro while Thai tea was “limited.” The cashier reassured me that they would switch flavors every week, so hopefully I’ll come back when the almond flavor is available. (Maybe they should have a monthly or weekly schedule?)

Aside from my suddenly narrowed flavor choices, I decided to order a medium-sized taro shaved ice with mochi, strawberries, cheesecake bits, gummy worms and a drizzle of condensed milk which came to a total of $5.13 with tax while my boyfriend ordered the mango shaved ice with the same toppings.

After a few minutes, our shaved ice was ready! Excitedly, we selected our spoons and sat down to eat. My attention was drawn to the oddly placed toppings, as they were sandwiched between the side of the cup and the ice, and this made it pretty difficult for me to reach the mochi, cheesecake bits and strawberries. The condensed milk was not a generous amount to me since I love condensed milk, but if you’re not a condensed milk lover, it won’t be an issue.

The gummy worms were most likely stale, and they were also off-brand so they tasted a little weird to me. Their mochi wasn’t as soft as Yogurtland’s or most other places, but it was still acceptable, and according to the employees, green tea mochi was a favorite among the guests. The cheesecake bits did not taste stale at all and in fact were creamy little bites of heaven. All in all, the toppings were satisfactory and my favorite would have to be the cheesecake bits.

Texture-wise, the shaved ice was as light, fluffy and melt-in-your-mouth creamy as promised (think of shaving a thick ice cream rather than just ice and when it melts, it’s still thick rather than being watery). Flavor-wise, the mango was too sweet for my liking and I wasn’t expecting it to be so overwhelmingly sweet. In fact, it was so sweet that I didn’t feel like eating too many of the toppings since the shaved ice had enough flavor on its own. If you have a sweet tooth however, you would probably enjoy the mango more than I did.

Other than that, the taro was on the lighter side so it was more refreshing and allowed you to enjoy sweet toppings without having to compromise, but it was also a little less flavorful than most other taro-flavored desserts. The green tea would have to be my favorite here though since it was a good balance of flavor and definitely not too sweet. It tasted richer and my lack of a big sweet tooth appreciated it. I’ve also heard good things about the premium matcha flavor so if it’s available you could give it a try (for $.50 more). They also had mint-infused water in a cooler that I really appreciated since it was a break from the sweetness of my dessert.

Overall, the quality is reflected by the cheaper price of shaved ice, but it’s a satisfying dessert nonetheless. If you’re craving some shaved ice or you’re feeling adventurous (or you want to eat pop rocks with your dessert), I would recommend trying Polar Bear Shaved Ice and maybe you’ll be lucky enough to try a new flavor! For a moderate price, you can get a decent-sized dessert that you can customize to your liking and enjoy some free entertainment from the music and the television in a clean environment.