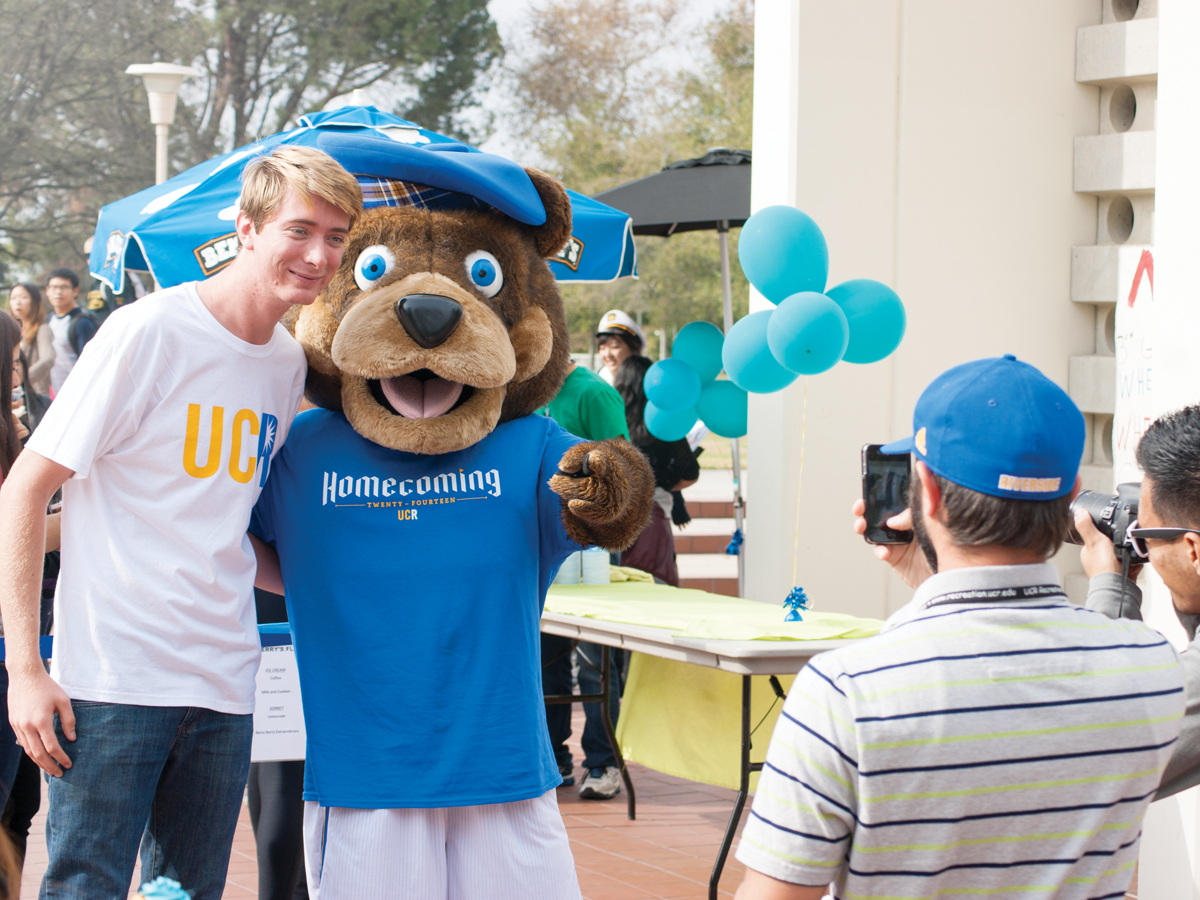 It was a cloudy and chilly day for a celebration, but ASPB wasn’t going to let that ruin Scotty’s big day. Ten minutes before the event was supposed to start, eager college students, intrigued by free food, had already begun to line up around the Bell Tower for complementary Ben & Jerry’s ice cream and Casey’s Cupcakes.

Looking around, there honestly wasn’t much to do, but there was definitely enough to see. A rock climbing wall stood near the side of the tower while KUCR set up to play music near. ASPB’s tent was ready with giveaways and a photo booth was set up on one side of the Bell Tower with a bunch of cute accessories including flamingo hats, turkey leg hats and many strange yet hilarious decorative items.

By the time I had gotten a cup of free Milk and Cookies ice cream (my favorite), however, the event had warmed up. Seemingly right on cue, the sun came out and cheerleaders surrounded the area happily handing out paper Scotty pop-out figurines while Scotty himself posed for various pictures. Chill music courtesy of our own KUCR surrounded the Bell Tower, although for a birthday celebration the playlist might have seemed chill and mellow.

Regardless, Scotty danced along with the cheerleaders to the relaxed beats, stopping here and there for pictures with the squad and other fans. Afterward, he handed out free buttons to promote the Homecoming Bonfire and even agreed to take selfies.

The line for cupcakes was shorter at this point so we headed over to get a mini cupcake. The cupcakes were all decorated accordingly, with either a Scotty or a Bonfire logo and various colors of icing sprinkled with gold glitter: so cute! It was just a plain cupcake but it served as a small and satisfying dessert nonetheless.

I wandered over to the ASPB booth and they were hosting a wheel for giveaways. (What better way to celebrate than by getting free food, pens, pins and foam hands?) One by one, students stepped up to the wheel to test their luck, and a win was pretty much guaranteed. To sweeten the deal, students could also enter a contest to win backstage passes for a meet-and-greet with the stars of ASPB’s upcoming event, “Beyond the Screen,” where famous comedians of social media such as Andrew Bachelor, Jimmy Tatro and Brittany Furlan will discuss their stories.

The music picked up its pace despite the slowly dissipating crowd and about an hour into the event, KUCR led students around the Bell Tower in singing the birthday song to Scotty. “Happy Birthday to You” rang across the area, and students continued to wander from booth to booth examining the limited attractions.

Soon, the ASPB booth had run out of free goods, along with Ben & Jerry’s and Casey’s Cupcakes. Needless to say, the event had a successful turnout and although the celebration itself wasn’t too big, Scotty definitely seemed to enjoy himself.

As the event wound down to its last hour, we sat on the benches and listened to KUCR’s music while making our miniature paper Scotty figurine (which was harder than it looked, for me at least).

As I walked back toward the Campus Store, I noticed that artists at the Chalk the Walk were still hard at work getting ready for judging (which would happen later on that afternoon) to win the grand prize of $100 or other smaller awards of $50.

For those that are unfamiliar with the event, the Chalk the Walk is a competition for artists all across campus to demonstrate their abilities by drawing something UCR-related in their designated concrete squares and to simply make our concrete floors a little more amusing as we walk to class. Along with a crowd of students, I too gathered around the Chalk the Walk spaces admiring artworks, including multiple fictional interpretations of Scotty, scenery of UCR and even a cartoon of Norm the Navel lying down and saying, “Draw me like one of your French girls.”

Together, the Chalk the Walk and Scotty’s birthday helped liven up this gloomy Thursday for us Highlanders. From free food to activities to music, it was a successful day overall. Happy Birthday, Scotty!