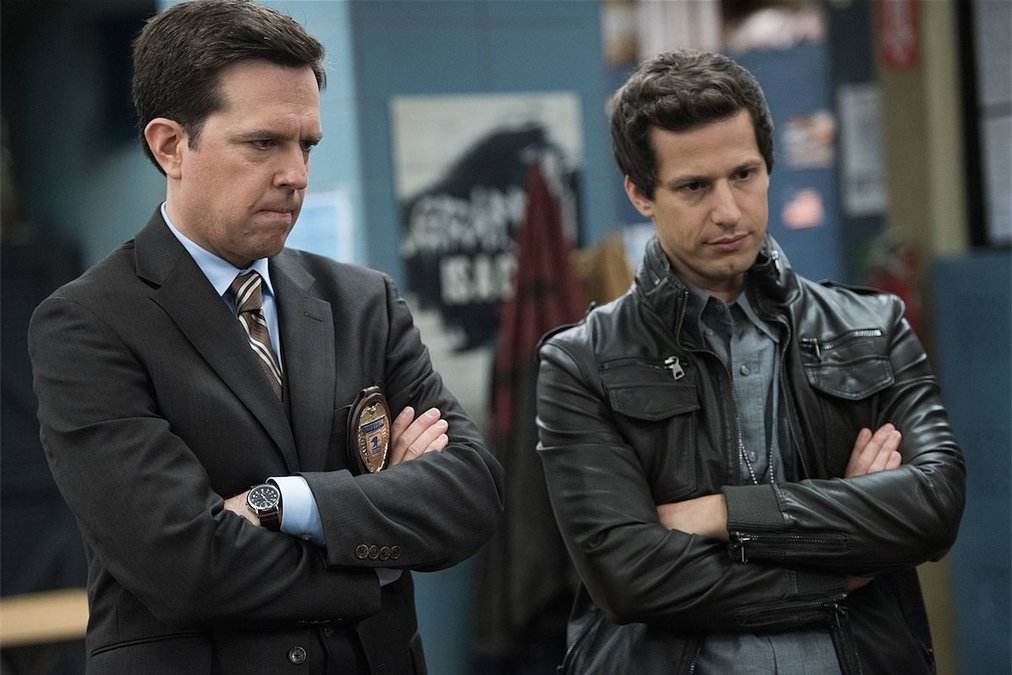 Even though it’s been consistently funny, this season of “Brooklyn Nine-Nine” has been up-and-down for me in terms of enjoyment. Luckily, “USPIS” is an upswing. It’s an episode that’s funny, but since that humor is rooted in character relationships, “USPIS” is well-rounded in a way that much of the season has lacked.

“USPIS” returns to Rosa’s (Stephanie Beatriz) drug task force and the hunt for giggle pig, last mentioned three episodes ago in “The Mole.” I understand that sitcoms often don’t have the same serial nature that dramas have — and even on dramas, you get standalone episodes — so it’s annoying but not too upsetting that we’ve had such a long break in drug task force plots. It helps that there’s finally some action on the hunt for drugs and that Rosa gets a chance to stretch her legs as head of the task force.

The USPIS in the title refers to the United States Postal Inspection Service, the law enforcement branch of the postal service, and Jake (Andy Samberg) and Boyle (Joe Lo Truglio) must work with post inspector Jack Danger (Ed Helms) because of an old mailbox key, a clue to how the dealers are getting giggle pig. Jake is initially excited about the collaboration because he thinks Danger (it’s actually pronounced Don-grr) sounds like a cool guy, but he’s underwhelmed by the man he meets, who tells a long story about stopping snail smugglers and thinks working at the post office is the best job ever, even better than the cops.

Throughout the episode, Rosa makes it clear that busting bad guys is important to her. Because Jake is her friend, she tells him she’s feeling pressure to get something done, and in return, Jake works with Danger when he doesn’t want to. The Rosa and Jake friendship is one of the best on “Brooklyn Nine-Nine” — he has her home address, information not even her relatives have — as Jake provides a humanizing angle on Rosa, who’s usually angry. At the same time, Rosa brings out a more serious side in rule-flouncing Jake. So it’s nice to see the writers return to it, particularly as it makes what happens with the task force matter to the audience.

But when Danger screws up a bust and lets the criminal escape, Jake goes behind his back. Although his work leads to an arrest, USPIS takes over the investigation due to Jake’s insubordination, meaning Rosa won’t get credit for the arrest or any future arrests. After Rosa yells at him about the situation, Jake recognizes that he messed up with Danger. He’s the most down I’ve ever seen him, all because Rosa is angry at him. I won’t lie that it’s a relief to see Jake messing something up. Jake-focused episodes tend to paint Jake in a really good light, even when he’s acting dumb. But “USPIS” shows both sides of Jake: the one who acts childish and the one who’s a genuinely good guy. It’s the spotlight on his friendship with Rosa that allows this.

Ultimately, Jake apologizes to Danger — among the things he apologizes for is calling forever stamps “a lie because the Earth will eventually be swallowed by the sun” — and Danger stops USPIS from taking over the investigation. Rosa and Jake get to take down more bad guys, and it’s a win for the Nine-Nine as well as for “Brooklyn Nine-Nine.”

Meanwhile, back at the station, Terry (Terry Crews), Holt (Andre Braugher) and Gina (Chelsea Peretti) try to help Amy (Melissa Fumero) quit smoking. We last heard about Amy’s habit of occasionally sneaking cigarettes at the end of last season in “The Apartment,” but now her smoking has turned into a full-blown addiction.

Each person has a different way of helping Amy to quit, and none of them work because they’re so specific to the characters. Terry wants Amy to dunk her head in ice water every time she gets a craving. Holt thinks she should try running without music because it’s “a crutch.” Gina is a bit of an odd card with meditation, but I imagine she likes having nothing to do and no one to interact with for long periods of time. These methods all work for the characters and their personalities, so of course, none of them work for Amy. “Brooklyn Nine-Nine” knows its characters and what they would do, which is why I get so frustrated in episodes where the characters aren’t being used to their full potential, which fortunately it does here.

In the end, it’s all about finding a good way for Amy to quit, and that means Holt giving her a pep talk. I am so happy that “Brooklyn Nine-Nine” is embracing a mentee-mentor relationship between Amy and Holt, so this is my favorite scene of the night. It doesn’t hurt that the scene is also hilarious. When Holt tells Amy that stress is making it harder for her to quit smoking, he says being less of a perfectionist is a concept she should “become familiar with.” Using the dangling preposition “with” is Holt’s idea of setting a less perfectionistic example. Holt and Amy get along well because they speak the same language — she is surprised by his use of a dangling preposition — and I hope “Brooklyn Nine-Nine” gives this relationship a chance to develop further.

In “USPIS,” every character in the ensemble gets a chance to shine. Surprisingly, this also includes Scully and Hitchcock, who pretend the precinct missed Scully’s birthday and reap the cash benefits of the guilt this induces in the others. When “Brooklyn Nine-Nine” utilizes the characters it has, it’s a show that’s firing on all cylinders. Here’s to more episodes like this one as we finish out this part of the season.