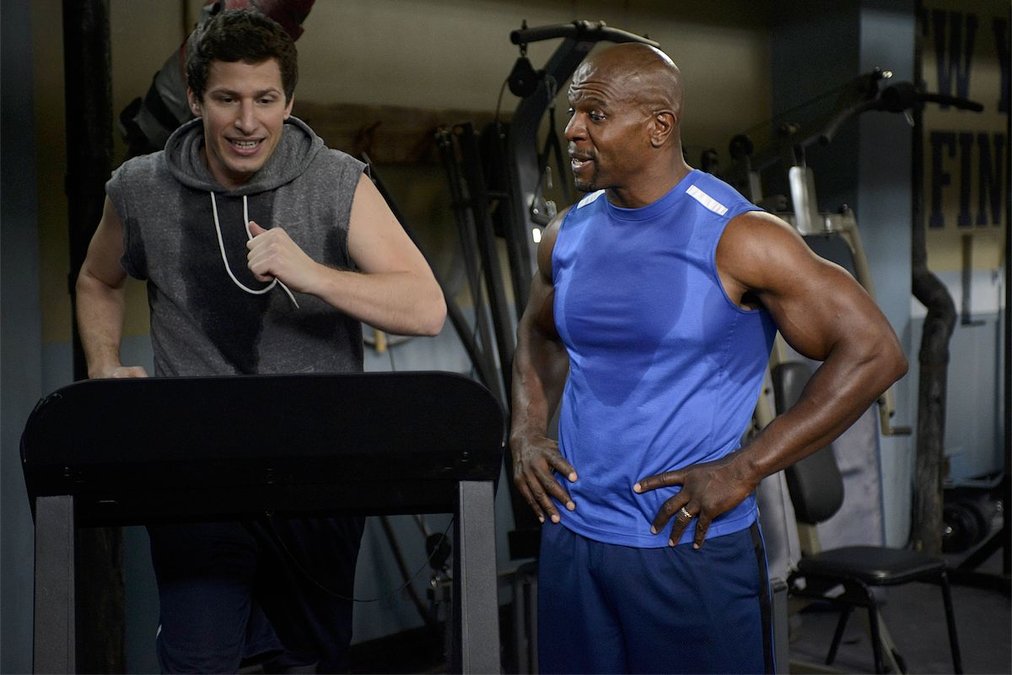 Honestly, I had trouble figuring out what to say in this review. “Payback” is a low-key episode of “Brooklyn Nine-Nine,” one that I doubt I’ll remember in the months to come. While “Beach House” didn’t have a lot of plot, it was memorable because of its attention to character. “Payback” doesn’t have a lot of plot either, and on top of that, it mostly forgets to pay attention to the characters, leaving the episode without much to recommend it.

After “Beach House,” I thought the seriousness of Rosa (Stephanie Beatriz) and Marcus’ (Nick Cannon) relationship would stay between her and Boyle (Joe Lo Truglio), but strangely enough, the teaser for the episode features everyone helping her figure out where to take Marcus for his birthday dinner. The “Brooklyn Nine-Nine” teasers rarely have anything to contribute to the episode beside laughs, and the mention of Rosa’s relationship is no exception, but it’s interesting to see how relatively nonchalant Rosa is about having the entire precinct know about how much she likes Marcus and marks one of the few character moments in the episode.

The main plot of this episode revolves around Jake (Andy Samberg) and his debts — more specifically the fact that he owes everyone at the precinct money. When Terry (Terry Crews) is especially adamant about getting paid back, Jake does some detecting and figures out that Terry’s wife is pregnant. It would be nice if we got some sort of reaction from Terry about what this means for him, other than the obvious need for money, because Terry is a character largely defined by his love for his family. It’s what keeps him from field work during a lot of the first season, and we hear about his twins all the time. But Terry’s only concern about Jake knowing about the pregnancy is that he needs to keep it a secret.

We haven’t had a Jake-centric episode in several weeks, and the show has been a lot better for it. “Payback,” however, falls into that trap, and I suspect that’s why we don’t get much of a read on Terry during the episode. The story of the episode isn’t about Terry at all — he’s just the vehicle. It’s actually an episode about Jake trying to prove he can be a godfather to the baby by keeping the pregnancy secret.

“Payback” manages to get some much-needed air by adding the rest of the precinct into the mix. They claim that if Jake is paying Terry back, he should pay them all back, but they know something else is going on. Boyle is particularly upset about Jake and Terry’s secret — he thinks they’re opening a bowling alley together — which is amusing and in character for Boyle, and Gina (Chelsea Peretti) gets a good moment when she forces Jake to pay off his debt by telling her relatives she died just so she can see how they’d react.

But the plotline takes a dive when Jake hits reply all on an email to Terry in which he talks about baby names. The precinct bands together to erase the email from Terry’s computer before he finds out, but it’s all for naught when Holt (Andre Braugher), who isn’t in on the plan, congratulates Terry on the pregnancy. Everything that happens in this plotline is a little too predictable and easy, including Terry ultimately forgiving Jake. It’s nice that the forgiveness comes after Jake manages to finish paying off his debt to Terry — by selling his car no less, which we know is “a very big deal” — because it shows that Jake actually cares what his friends think of him and the email was an honest mistake. Since we already know all of that, the lesson doesn’t add much to the episode, but it does lead to one of the funnier moments of the night — all of Jake’s knowledge about being a godfather comes from the movie “The Godfather.”

Unfortunately, the subplot of “Payback” doesn’t fare a lot better than its main plot, in spite of how excited I was about Amy (Melissa Fumero) and Holt teaming up to solve the remaining mysteries of the Brooklyn Broiler case once and for all. Part of this comes from the fact that there simply isn’t enough time allotted to the plot since most of the episode deals with Jake and his problems, and part of it comes from my own dislike of potty humor.

After Amy and Holt go on a stakeout and eat “street meat,” Holt develops a bad case of diarrhea, and it looks like Amy has messed up her mentor-mentee relationship with Holt once again. Fortunately for her, Holt claims the diarrhea did exactly the opposite and gave them something to bond and laugh about. That’s the entire story of what happens in this plot, and while I know that I’m predisposed to want more Amy and Holt, the lack of story in the plot is strange regardless, particularly since there was only one other plotline in the episode. Still, there are a few great moments for the pair, including Amy’s insistence on calling Holt her partner, Holt’s tiny chuckle which for him is uproarious laughter and Holt’s excitement over accidentally rhyming: “I’m a poet and didn’t even know I was rhyming those words.”

Since most people were probably busy watching the Golden Globes, I suppose it’s good in a way that “Payback” isn’t a great episode of “Brooklyn Nine-Nine,” but it would’ve been better if “Brooklyn Nine-Nine” had been fantastic, a way to spite the Globes because the show was snubbed this year after last year’s win. Realistically, the writers had no way of knowing which episode would fall opposite the Globes — or if Fox would even choose to run an episode — and I doubt they’re upset enough about the show not being nominated to want to spite the Globes. But I still would’ve appreciated a more quality episode this week. At least I can remember last week’s episode fondly.