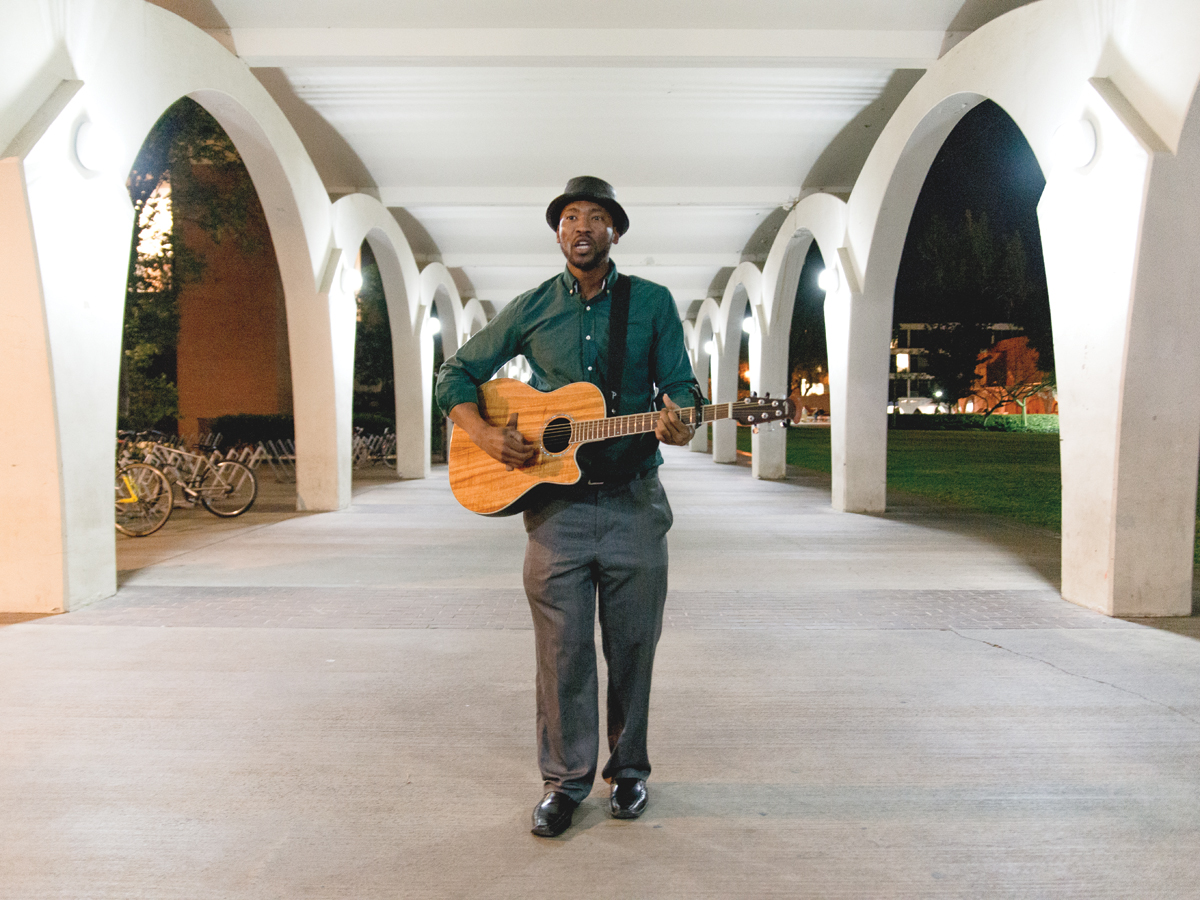 “That’s crazy! It’s so unreal!” marveled “Rocky” Peter Ajoku as he stared at a picture of an ‘American Idol’ billboard boasting his overjoyed self clutching onto the life-changing golden ticket his friend sent him. “I broke down in tears of joy when I saw it.” For Rocky, the ‘American Idol’ golden ticket was also a ticket to an undoubtedly brighter future.

Growing up in Nigeria, there wasn’t a day where Rocky wouldn’t fear for his life around the malaria-infested mosquitoes that heavily populated the area. He was forced to become independent from a young age, as he had to look after his younger brother as well. “I lived on the streets scavenging for food with my little brother, and although I never had instruction, singing was always very therapeutic to me as a kid. I would sing, work on the farm, sing then work some more. It made the times a little easier and gave me hope,” he says.

By working for his uncle and learning to speak English gradually through encounters with strangers, the naturally charismatic singer eventually saved up enough money to come to America and attend UC Riverside, where he has felt a family-like connection with his classmates. “College was such an impossible dream. Most people don’t usually make it past middle school,” Rocky recalls. “I’m incredibly blessed to be here in the United States and especially in UCR.”

Mr. Lee, a worker at Freshh Donuts, eventually provided him with his first guitar after seeing a tremendous amount of talent in Rocky. This gave Rocky the proper push to really take his singing to another level, and he didn’t waste any time. “When I realized my passion, I decided I would take the risk since I had nothing to lose. So I skipped out on medical school for a career in music,” he revealed. Despite becoming homeless after receiving his undergraduate degree and nearly ending up where he originally began, Rocky never lost faith. He sang his heart out on YouTube, and some students would even be able to catch him singing across campus.

As he became more in touch with the music industry through YouTube, he never failed to keep a positive attitude through the stress that pursuing a career in music brings. In order to remain so positive, Rocky begins each day with the thought that it will be a good day already in mind. By choosing to look at the simpler things in life and drawing inspiration from everything around him, he is able to compose songs almost instantaneously.

By bringing out true emotion and past experiences like some of his inspirations Michael Jackson and Eminem do, Rocky can mesmerize others through song and be mesmerized by everyday life. “Singing was my iPod!” he mentioned happily. “I derived so much joy just from being myself.”

One day, an undercover ‘American Idol’ producer commented on one of his videos anonymously, vouching for him to consider an audition. What made it even more shocking was the fact that the video only had 300 views. Soon enough, comments started to flood his videos, all urging him to take a final push and audition. “I was so honored that people believed in me; my main goal is to share my original work with the world and I felt that ‘American Idol’ would be the perfect outlet to do just that,” said Rocky. Without hesitation, he decided to take a leap of faith and audition for ‘American Idol’.

Although the audition process was brutal and tiresome, Rocky decided to make a bold move: Instead of making a cover to a piece like a vast majority of singers have done in the past, he decided to perform an original piece entitled “Wrong Places” which intended to raise awareness to abusive relationships. The song was extremely personal to him since it related to one of his friends’ stories, and he didn’t want to pass up the opportunity to convey the message to the world.

“I wanted to show them that I’m a writer that can also sing and be brave enough to get that golden ticket with my original song,” he said. His fearless choice paid off — the judges loved it. He received so much praise that he decided to push the boundaries a bit more by performing a song in Igbo as his second audition piece. To his surprise, however, the judges were less amused by his song choice and went on to criticize him, asking why he had chosen a non-English song that had only lasted a little under a minute. “I figured, go big or go home, right?” laughed Rocky.

Despite the mild backlash, his confidence never faltered and it prevailed in the final deliberation. Before he knew it, he was among the lucky 200 to receive the golden ticket to advance to Hollywood. “I immediately reflected on my life and I just didn’t believe it at first,” he recollected. Rocky literally started from the bottom, and now he’s at the entertainment capital of Hollywood where his first episode (if they choose to show his audition) is predicted to air around January 28 or 29.

“No matter what happens (at ‘American Idol’), my goal is to record and produce an album; I now know I have the exposure and I will definitely use it to my advantage. I really hope to share my art with the world,” Rocky remarked. This experience alone is enough to jumpstart his career, and with his limitless talent and courage, there’s no doubt that Rocky will live up to his promise of making an impact on the world.

From enduring farm labor and nearly dying from mosquito bites in Nigeria to getting a college degree at UCR and finally making it to ‘American Idol,’ “Rocky” Peter Ajoku has gone through quite a lot. He never loses hope and will indefinitely continue to serve as an inspiration for those who need a gentle urge to pursue something that they have discovered passion for, but never had to courage to carry out.