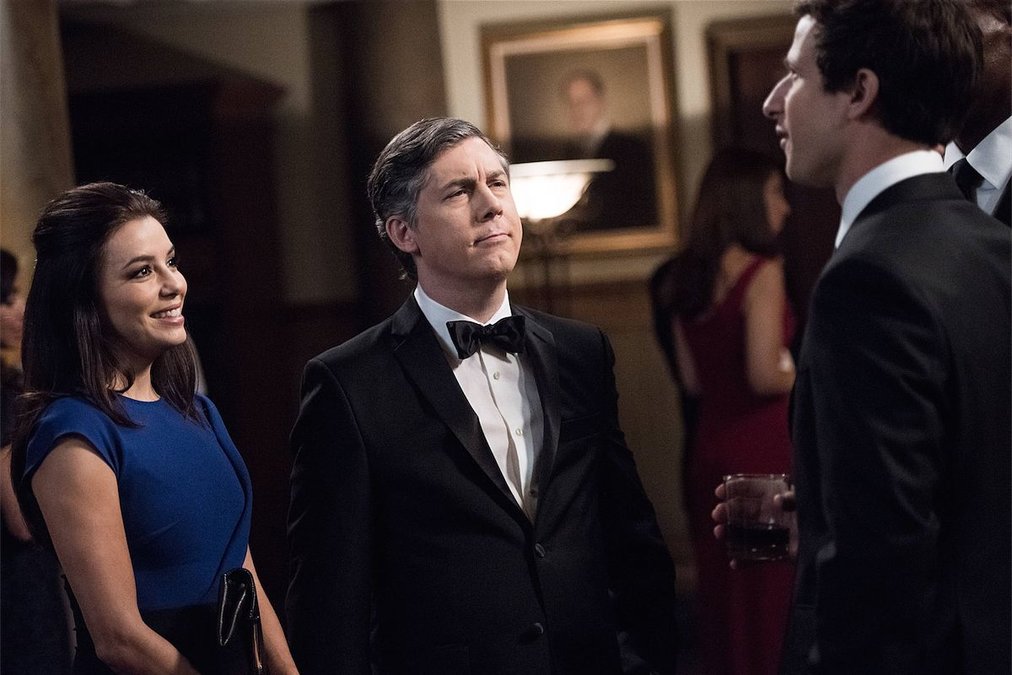 Like predecessors “Community” and “Parks and Recreation,” “Brooklyn Nine-Nine” has a remarkable sense of continuity for a sitcom. While sitcoms often focus on plot and don’t mind if character details get shifted here and there, these shows buck that trend and put emphasis on character as well as plot, keeping up with the details and overall creating the feeling of a lived-in world.

I mention this largely because all three plotlines in “Defense Rests” have ties to relationships that have previously been established and examined in this season of “Brooklyn Nine-Nine.”  Some of them, like Jake (Andy Samberg) and Sophia’s (Eva Longoria) relationship and the antagonism between Holt (Andre Braugher) and Wuntch (Kyra Sedgwick), have even played out in multiple episodes. The purpose of such relationship continuity should be to further develop the characters, allowing them to respond to new challenges in different ways. “Defense Rests” provides some of that, particularly in the Boyle (Joe Lo Truglio) and Gina (Chelsea Peretti) plotline, while falling short on its developments with Jake and Holt in their respective plotlines.

The main plot of “Defense Rests” circles Jake and Sophia’s romantic relationship. At the start of the episode, Sophia says she wants to pause the relationship because it’s interfering with her work. There are hints, however, like when she gets nervous about Jake saying he loves her, that there are other issues at play. This is where the most egregious continuity error in “Defense Rests” occurs because the last time we saw Sophia was in “The Road Trip” where Jake and Sophia seemed more or less on the same page.

Still, the plotline itself is fairly amusing as Jake seeks to win over Sophia’s boss (Chris Parnell) so that he’ll give Sophia good cases and the relationship between Jake and Sophia can be repaired. At first his attempts at bonding don’t work, but Jake finds common ground with betting on ridiculous stunts. The stunts, including figuring out how many egg rolls tall Terry is, more or less play out as a montage, and “Brooklyn Nine-Nine” does montages well.

The twist in the episode is that Jake catches Sophia’s boss doing cocaine in the bathroom and must arrest him. This places Jake and Sophia on opposing sides, and ultimately, the stress is too much for their relationship. Or that’s how the episode makes it seem until Sophia tells Jake she doesn’t think she’s in love with him, the first hints of this we’ve gotten on the show. The lack of screen time for Sophia and lack of emphasis on her relationship with Jake may simply be due to the fact that Eva Longoria was only signed to a certain number of episodes, but it would help add emotional intensity to the breakup if we had more context about why Sophia wants to break things off with Jake.

One of the secondary plotlines features the return of Holt’s nemesis, Wuntch. I’m surprised by how long they’ve extended the Wuntch story arc, and it seems the writers are too because I’m not sure they know how to use her now that she’s more than a guest star. But Holt and Wuntch plotlines have always worked for me simply because of the acting from Braugher and Sedgwick, and this particular one, in which Wuntch asks Holt to recommend her for a job, is no different.

Bolstering the plot is Rosa’s (Stephanie Beatriz) presence when Holt asks her for advice about how to deal with Wuntch because she “understands vengeance.” Although Rosa agrees with the fact that she knows about vengeance — she got a kid suspended from second grade for hoarding markers — she ultimately tells Holt to be nice because the same kid tortured her for the next ten years when she came back to school. It’s a nice moment between the two, which also gives us more backstory on Rosa, something that is sorely lacking simply because Rosa is so private.

Holt takes Rosa’s advice and gives Wuntch a favorable recommendation, largely because it would mean she’d move to Boston. He also can’t resist getting in a parting blow by giving her tickets to “Wicked” in Boston because he wants to “rub her nose” in the fact that she’s moving to a “second-class city.” Since it combines “Wicked,” Holt being mean to Wuntch and a Boston versus New York City debate, this was by far my favorite moment of the episode.

But ultimately, Holt doesn’t get even his partial vengeance because Wuntch turns the tables on him and uses the Boston job to get promoted in New York. If Wuntch wants to stay around, I’m fine with that, but I hope the writers know what they’re doing. I don’t have much hope based on the fact that they have Wuntch kiss Holt, a move that seems to specifically call back Wuntch’s supposed crush on Holt and a plotline I hoped we’d dropped, but I guess we’ll see.

The final plotline in “Defense Rests” revolves around Boyle and Gina’s parents wanting to get married. Here, we have a slight continuity break again because the last time we visited this plotline in “The Pontiac Bandit Returns,” Boyle and Gina had agreed to work together to break their parents up. In the intervening time, Boyle apparently chose to approve of the relationship because his dad is in love. It’s a sweet gesture, complemented by Gina’s equally sweet gesture of not agreeing to the marriage because she doesn’t want her mom to get hurt.

However, after interrogating Boyle’s dad, Gina relinquishes and gives her blessing. Like admitting to Boyle and Amy that she doesn’t want her mom hurt, Gina approving the relationship is a mark of how far the character is from her days as wisecracking secretary. Yes, she’s still that, but like the rest of the ensemble, she has depth and many sides.

In spite of its continuity bumps, “Defense Rests” is a decent episode of “Brooklyn Nine-Nine,” managing to combine plot, character and laughs. With episodes like this one, “Brooklyn Nine-Nine” makes me glad that Fox recently renewed the show for a third season.