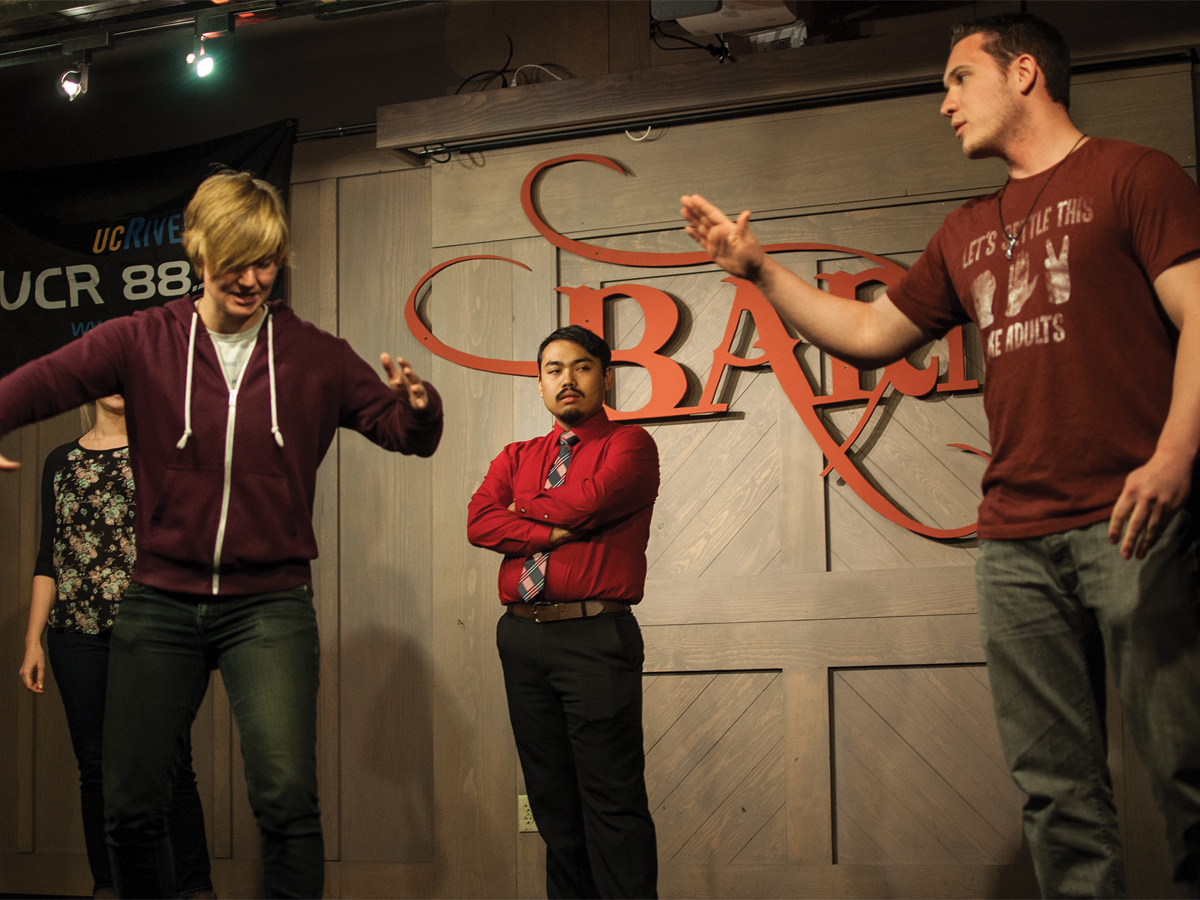 We’ve all heard of the saying “laughter is the best medicine,” so what better way is there to trample our stress than to attend the Well’s very own clinic of merriment with a free night of comedy? Many students gruelingly dragged their bodies to the Barn Thursday evening for their dose of amusement to endure their remaining midterms. The few who arrived promptly at 6 p.m. tiredly trotted about before the booths of wellness advice, seeking an immediate stress suppressant. The relief didn’t kick in until Active Minds — a counseling organization run by the student wellness partners — kicked off the comedy show to praise the advantages of laughter on stress.

With perhaps an overdose of caffeine, Highlanders milled around the health fair after signing in at the Barn’s entrance to collect their fill of free goodies — apparently a common solution to life’s dilemmas. The Active Minds station displayed brochures on counseling while they informed students of the assistance they offered and the Health Center set up an oral preventative care station, providing floss, toothpaste, toothbrushes and even tongue scrubbers. Students also tested their knowledge on sex and alcohol prevention to earn Scantrons or blue books while others contributed to the “How I Will Laugh More” poster by pasting sticky notes of their goals for happiness.

After obtaining a fair knowledge of stress reduction and capturing silly moments in the Polaroid booth, students scattered throughout the room with a satisfying dinner bought from the Barn as they awaited the commencement of the comedy show.

“How many of you want healthier, happier lives?” representatives of the Well’s Active Minds eagerly began as they attempted to grasp students’ attentions. By the looks of it, whatever medicine they were prescribing was already succeeding as peers began to lose their dull pallor and regain a sense of life as they applauded the hosts. They educated us on the benefits of laughter, like decreasing stress hormones and increasing immune cells, while also eliminating anxiety and fear to provide one with an improved outlook on life. The audience quickly absorbed this knowledge before welcoming the opening act: UCR’s Improv Anonymous.

Improv Anonymous quickly encouraged the audience to get involved as they shouted out names and objects to the group at the start of each act. In the “Dating Game,” three members of Improv Anonymous were instructed to act as Eleanor Roosevelt, a stapler-lamp and a Scantron-turned-Megatron at the crowds’ request. One last improv member proceeded to the stage to choose which member he would take on a date. He asked where their ideal date might occur. The Scantron responded with the location of: “Staples, particularly to get pencils, which I like because they fill up my bubbles.”

During “Advice Panel,” students were given the chance to question experts in their respective fields — Hermione Granger from Hogwarts, a psychopath recently released from an insane asylum and Nikolai, a Russian transfer. Of course, standard university questions included how to cure a hangover and make quick money. We were thus wisely enlightened by the psychopath of how “death is the answer to all of your problems.” If any of these experts had accomplished anything, it was surely Hermione, who must have stirred up a new potion to cure midterm stress and induce laughter, just as she declared that she also “made a potion to prevent cat diarrhea.”

And to think that was only the warm-up before Dana Eagle, who has appeared on Comedy Central and Comics Unleashed, captivated the entire audience with her small figure, yet huge presence on stage. “I’m a gay, bipolar Jew with a lazy eye!” Eagle announced, immediately setting herself as a unique figure. She used her influential voice to draw out the low points that we inevitably face in life and made them more bearable. Eagle fearlessly revived her life’s negative topics, such as bipolar disorder and depression, only to tackle them down and demonstrate our resilience with our ability to laugh at everything. “80 percent of us suffer from depression and the other 20 percent of you cause it!” she exclaimed. She ended by throwing “pills” to the crowd as she belted out one of her original songs, leaving us with the cure for a pleasant, stress-free future.

Comedian Olivia Harewood hailed to the stage in a princess-like manner to greet her latest crowd. She exclaimed her excitement to perform for a wellness fair, though she clarified that she won’t be making people feel well by selling weed — anymore. She brought up controversial topics such as religion and race, but allowed everyone to have a great laugh about it. Harewood shared the first time she told this racial joke: “I can’t volunteer, I can’t work for free … because I’m black, and they banned slavery. It’s in the Constitution,” which caused a woman to declare her as the n-word before the whole audience when she told the joke for the first time.

Students gathered at the end of the comedy show to relish the jokes told and share the irreplaceable relief for an improved mental health — laughter. I spoke with a student after and noticed a considerable difference in her now-brightly lit eyes as she explained to me that the energy brought by the comedians enlightened her on the advantages of merriment on stress and mental illness. After all, an overdose on laughter can’t cause any harm.