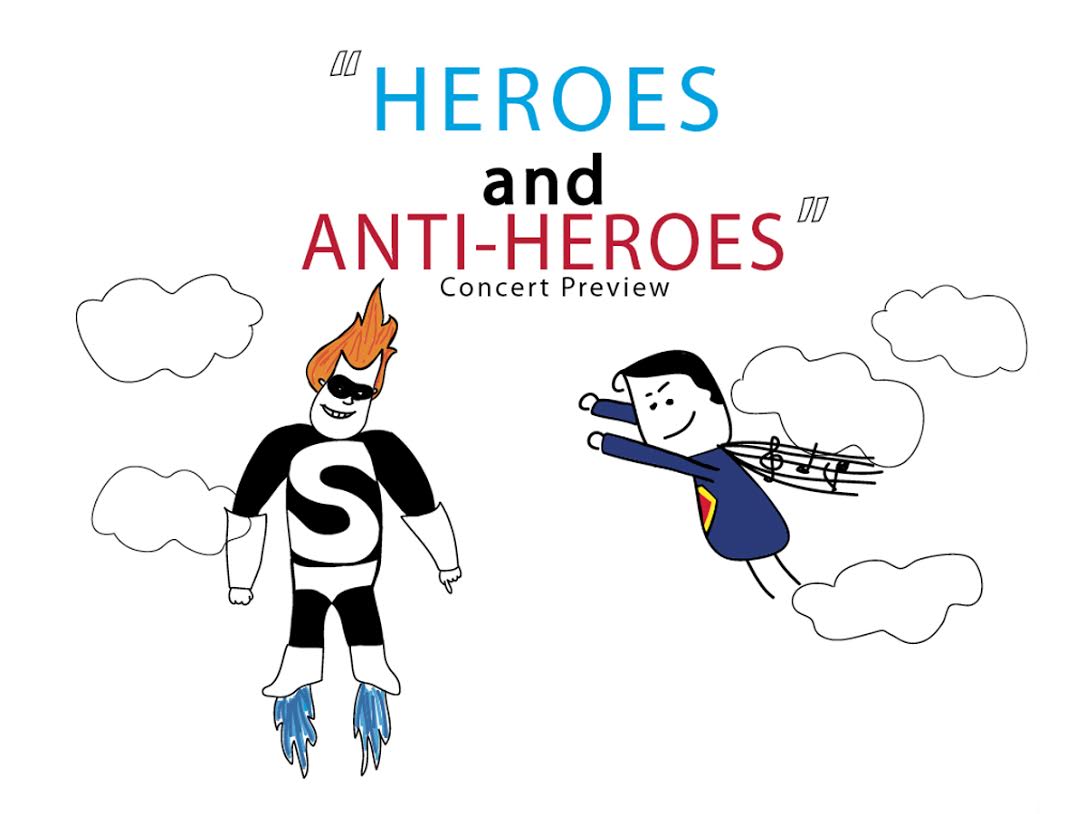 UCR’s music department will be putting on an orchestra concert this upcoming Saturday entitled “Heroes and Anti-Heroes.” Conducted by Ruth Charloff, the UCR orchestra will play a variety of different music that tells the stories of heroes and antiheroes with backgrounds ranging from films to operas. “I was thinking about various ways to make a program out of a piece that had to do with Lincoln,” said Charloff. After deciding on “Lincoln Portrait,” Charloff came up with the idea of basing the concert around heroes, but not your typical heroes. “I came upon a lot of music that was about ambivalent heroes and colorful characters that you couldn’t quite call heroic but I thought it would be fun to include these figures,” Charloff explained.

One person excited about the theme is second-year music and culture major Juliet Sangalang, who plays the violin and is currently the concertmaster of the UCR orchestra. “The theme allows us to dive into gallant pieces of music to paint dynamic aural images of each Hero (or “Anti-Hero”) for our audience,” Sangalang said. Also satisfied with the subject is first-year mathematics major and trombone player Shannon Sweitzer. “I think it’ll be really fun for the audience because it incorporates music that some of them will definitely be familiar with,” she explained.

One story being told through song is that of the fiery Carmen, originating from an opera of the same name. “She was a female opera lead who was unprecedented because she was very sexually forthright and didn’t accept social limits on her free expression,” Charloff explained. Drawing from the antihero aspect of the theme is a piece about Billy the Kid, a 19th century gunman who fought in the Lincoln County War and who also became an outlaw. “Billy the Kid is totally an antihero. He’s somebody that’s not really an admirable character but someone who is still a protagonist that you root for,” Charloff explained.

Another piece comes from an African-American folktale surrounding the legacy of John Henry, an African-American who played a part in helping to construct a railroad. Henry was an actual person, but legend has it that against all odds he outperformed a machine that was threatening to replace him amongst others in the workplace, only to die of exhaustion shortly after proving his capabilities. The piece uses many unique aspects to bring the story to life. “Throughout the song there are these fantastic depictions of train sounds and dissonant harmonies that sound like a locomotive being stopped. The piece is very colorful,” said Charloff.

Perhaps the most anticipated song of the evening will be “Lincoln Portrait.” The 15-minute piece contains an orchestra score as well as narration that quotes from Abraham Lincoln’s own inspirational writings and speeches. It was composed during World War II and has been narrated by public figures such as Coretta Scott King and actors like James Earl Jones. For Saturday’s performance, Chancellor Kim A. Wilcox will provide the narration. Choosing a narrator can be a difficult task, as the narrator must coordinate the narration with the music. “I knew he had knowledge of music and supported the ensembles and the department,” Charloff explained. “And I also knew that he was interested in Lincoln so I thought he might enjoy this.”

As a student, Sweitzer also expressed her joy over the Chancellor’s involvement. “When I heard about the chancellor doing the narration it was really exciting,” Sweitzer relayed. UCR student and clarinet player Joshua Misa believes it’s an honor and a privilege to not only perform with the chancellor but to perform the piece overall. “I have never played such a masterful piece that was so successful at portraying such a significant figure as Lincoln,” he said.

Sangalang believes that the piece and words spoken by Lincoln hold relevance today. “Everyday, I see some type of media post as modern version of Lincoln’s cry for racial equality and social justice. Who knew we would still be fighting the same social battles, seventy years later (after “Lincoln Portrait” was written)? The passages from Lincoln’s impactful speeches are very relevant to today’s society, in which we, the human race, must unite as one to progress towards a healthy future for our country,” she explained. Charloff expressed a similar sentiment, explaining that Lincoln’s dignifying and meaningful words are just as inspiring when applying them to the economic, environmental, social and war issues that we face today.

The orchestra will perform six pieces in total and there are about 50 musicians who will be playing during the concert, 32 of which are UCR students. The rest of the participants are made up of alumni, campus faculty and local musicians who have supported the UCR orchestra over the years. Despite the extensive nature of the piece, Sweitzer was confident they would be able to pull it off. “We took it one part at a time and then started to compile it once we were more confident about it,” she said.

The “Heroes and Anti-Heroes” concert will take place this Saturday at 8 p.m. and on Sunday at 3 p.m. at the University Theatre.