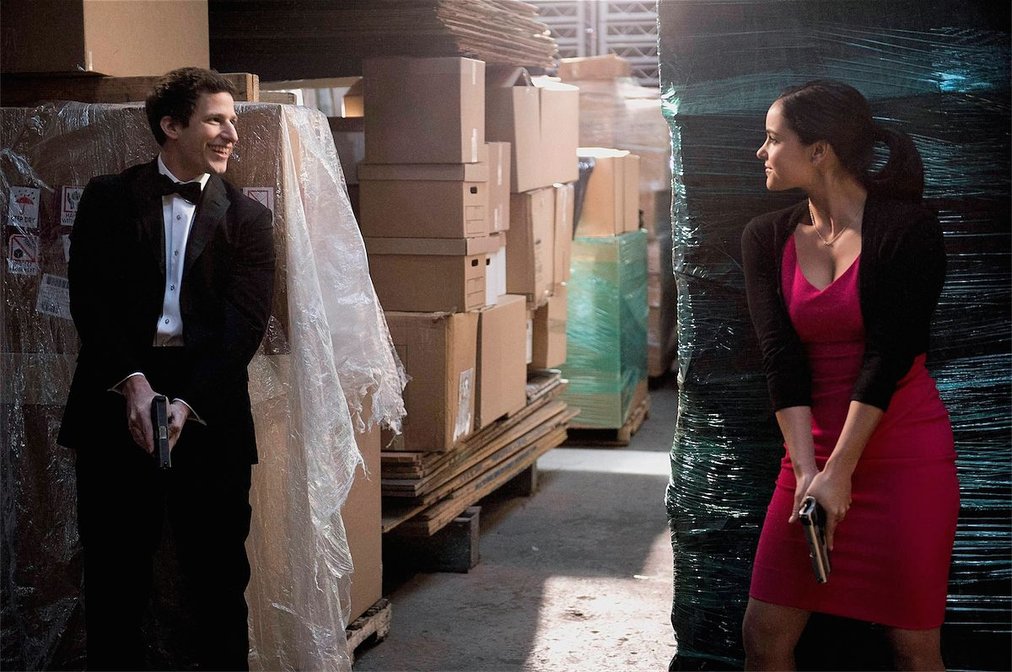 In my screenwriting classes, we often talk about how plot should flow naturally from the characters’ personalities. Think about a situation and how your characters would react to it, and that’s the basis for your episode’s plot. Now, most shows over the course of their run stray from that advice. It’s one of the hazards of having to turn out so many episodes per season. Sitcoms and cop shows are among some of the worst offenders, designed to be more plot- than character-driven.

The writers on “Brooklyn Nine-Nine,” having come from shows like “The Office” and “Parks and Recreation” usually manage to avoid this pitfall because on all these shows characters are key. The problem with “Brooklyn Nine-Nine” being a police show is this often forces a reliance on plot that doesn’t service character interactions. However, in “Boyle-Linetti Wedding,” much of the fun of the episode comes from placing the characters we’ve grown to love in the unfamiliar wedding environment.

“Boyle-Linetti Wedding” brings together a lot of storylines that “Brooklyn Nine-Nine” has set up over the past two seasons. The titular wedding is the culmination of the most prominent Gina (Chelsea Peretti) and Boyle (Joe Lo Truglio) story as it brings their parents together in matrimony. Even though Gina is concerned with making sure the day is absolutely perfect for her mom, there is a major scare when Rosa (Stephanie Beatriz) unintentionally gives Boyle’s dad cold feet when he remembers his other five ended marriages.

The cold feet aren’t really the point of this plot because Boyle’s dad isn’t a main character. Instead, it provides an opportunity for another glimpse at Marcus (Nick Cannon) and Rosa’s relationship. Rosa doesn’t want to invite Marcus to the wedding because she is worried he will say he loves her in the romantic atmosphere. But when Gina bolsters the groom’s confidence by telling him that the thing her mom loves best about him is his ability to take romantic risks, Rosa realizes she’s being a coward. She invites Marcus to the reception and tells him she loves him.

As nice as this and Marcus’ reciprocation of the emotion is, it would be better if Marcus had been featured in more than only a handful of episodes. I suppose this is par for the course for the show in non-Jake related romances, since Boyle’s ex-fiancee, Amy’s (Melissa Fumero) ex-boyfriend, Holt’s (Andre Braugher) husband and Terry’s (Terry Crews) wife have had very little screentime when compared to Jake’s ex, Sophia. But it’s still disappointing, leaving what should be a major character moment for Rosa without much audience empathy.

Instead of Marcus and Rosa’s relationship, “Boyle-Linetti Wedding” leans heavily on the “will they, won’t they” between Jake and Amy. I knew it was only a matter of time before this came up again, particularly after Jake and Sophia’s breakup, but luckily, the show treats the subject with a delicate hand. Although there is a lot of flirting between Jake and Amy — including one scene where she fake proposes to him — they both claim the potential romance between them is in the past. For much of the episode, even when he and Amy take a quick detour to arrest a criminal, Jake is concerned with getting his childhood crush, Jenny Gildenhorn, to slow dance with him.

We have heard about Jenny before, notably in last season’s finale “Charges and Specs,” where we learn she broke up with Jake at his Bar Mitzvah and slow danced with another boy in front of him. Jenny gets invited to the wedding because she knows Gina and her mom, and this gives Jake the opportunity to date her, which is what he’s been waiting for all his life. No, seriously. It’s kind of creepy how closely he kept tabs on Jenny after that, particularly since he used police resources to do so unlike the rest of us using Facebook.

Unfortunately for Jake, he’s a character in a sitcom, which means his plan to seduce Jenny at the wedding must be put on the backburner when he loses the wedding ring. He makes it back with the ring just in time to see Jenny kissing another guy, and his dreams are dashed once again. The episode plays up Amy’s offer to find Jake someone to slow dance with as an important Jake-Amy moment, and on most shows, it would be. “Brooklyn Nine-Nine,” however, has never displayed an interest in being “most” shows, and the reveal that Amy has lined up Gina’s great-aunt to dance with Jake was funny, as well as coming as a relief to me. The show is walking a very fine line in when it comes to Jake-Amy, and while I think they ultimately will end up together, I would rather it not happen anytime soon. Hopefully, this marks the end of talking about the prospect for another long stretch of episodes.

The Holt and Terry plotline in the episode is much less significant, but since it provided me with the hardest laughs of the night, I wanted to discuss it here. One of the first bumps in Gina’s attempt to throw the perfect wedding is the original priest dropping in. Terry steps up, particularly since he’s preordained and throws weddings at the gym, but he has to back out when he can’t stop crying over his speech — which leaves Holt as Gina’s only option for “deliver(ing) a heartfelt, emotional speech about love.”

The episode revels in the opportunity to pair Holt with his seeming opposite, emotion. Even though Holt claims he’s good at emotion, most of what we’ve seen throughout the series’ run would tend to prove that false. Indeed, “Boyle-Linetti Wedding” continues that trend. We see that Holt’s original speech contains gems like “marriage is a contract between two adults of different families” and “love, it sustains you … like oatmeal,” and this along with what we already know about Holt sets his speech up to be an utter disaster.

But appropriately enough since the show’s last episode brought Holt and Kevin’s marriage more into focus than ever before, Holt’s love for Kevin saves the day by prompting a heartfelt speech, which still manages to include Holt’s oatmeal simile. It also prompts Holt to want a “more festive” wedding than he and Kevin had previously, and if “Brooklyn Nine-Nine” wants an idea of what to showcase in the last few episodes this season, I would humbly suggest they feature that marriage celebration.

“Boyle-Linetti Wedding” is a well-constructed episode that weaves together characters’ backstories with their current issues. The wedding backdrop has a hard time bringing the police elements of the show to the fore, but it manages something much better. Nearly all of the characters have a role to play in the episode, and each person’s role and ensuing plot stems from their character traits. “Boyle-Linetti Wedding” is certainly not perfect by any means, but its imperfections largely come as a result of issues in multi-episode arcs rather than from problems with this episode in particular.