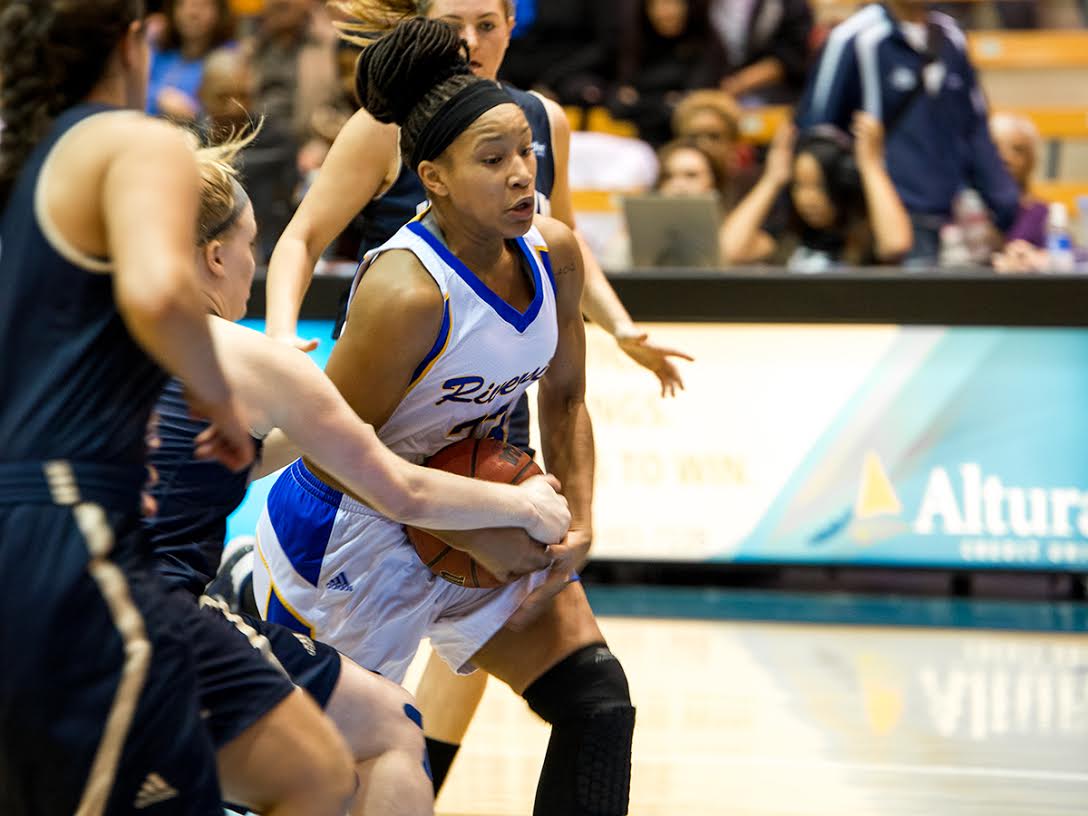 For a moment, it seemed that the team forgot that it was Senior Night.

Jamila Williams made sure that they soon remembered.

The senior from Moreno Valley was recognized tonight, being inserted into the starting lineup after being plagued all year by an injury as the women’s basketball team took down UC Davis 61-56 in their final home game of the season.

Annelise Ito led the charge with a season-high 24 points on an efficient 11-of-19 from the field on top of eight rebounds. Simone DeCoud also added 12 points in a game where fierce defenses collided. Brittany Crain, the fifth-leading scorer in the country, scored seven for the Highlanders, ending her double-digit point game streak at 37 straight games.

The Highlanders started the night shooting very poorly, struggling against a relatively uncommon two-three zone that focused on collapsing the paint and forcing the girls to take hesitant jump shots time and time again. After Davis jumped out to a 12-4 start going into the first media timeout, Head Coach John Margaritis had seen enough. The team left that first huddle with an increased sense of urgency on offense and a ferocious full court press defense that stymied UC Davis on offense and allowed the Highlanders to storm back into the game off of turnovers, taking an 18-17 lead with with 4:43 to play. This was only the beginning for the Highlanders, who continued the immense defensive pressure that forced Davis into wasted possession after wasted possession. The Highlanders capped off the first half on a 14-8 over that final 4:43 to take a 32-25 lead going into the half.

The second half saw UCR build on its ignited defensive pressure, continuing to swarm the ball handlers and jump the passing lanes, forcing constant turnovers and errant shots, and causing UC Davis to have a very streaky second half. Davis tried to quickly shut the gap that UCR had built over the previous period, but every time the Aggies came within striking distance, the Highlander defense turned on the ignition and forced turnovers, allowing the Highlanders chances to extend their lead.

Multiple times over the first 10 minutes of the first half, the Aggies cut the lead to one possession, and multiple times, the Highlander defense responded by forcing turnovers, leading to easy buckets. Both teams went on a two-minute scoring drought with nine minutes to play, with the Highlanders completely dictating the pace of the game and completely shutting UC Davis out of the paint. However, the score was still easily within striking distance, and the Highlanders never truly blew the game open, allowing the Aggies to eventually tie the game at 55 with 1:16 to play. But the Highlanders never faltered, keeping the lead and never letting UCD convert on another field goal.

The game started very back and forth for the first eight minutes of the half, with no team building a lead greater than one possession. However, Long Beach State seemed to take some control of the game, going on a massive 16-4 run that was capped off by collapsing interior pressure that caused the Highlanders trouble on the inside and risky defense that paid off in turnovers for Long Beach State, ending the half with a noticeable but surmountable 14-point deficit.

Facing a loss in their final game of the season, the Highlanders turned up the defensive pressure in the second half, forcing miscue after miscue for Long Beach State. The girls simply could not capitalize, continually having trouble with the superior size of the Long Beach State bigs, and could not buy a bucket from the outside. This allowed Long Beach State many second-chance opportunities that proved to be too much to overcome for the Highlanders, who were down by double digits for most of the second half. However, UCR made one final push, getting the score to 63-57 with 3:57 to go. However, time slowly ticked away for the Highlanders, and they simply did not have enough time to finish their comeback.