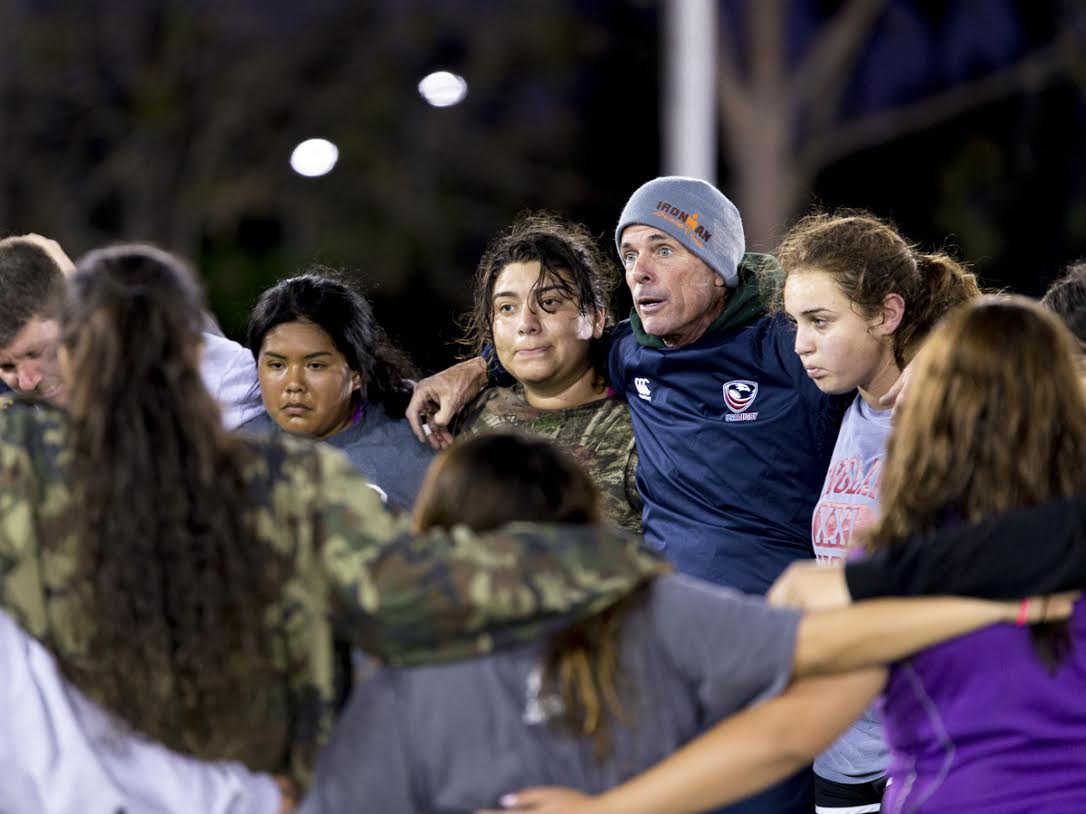 It was a relatively cold Tuesday night in Riverside and the team was already on its second hour of practice. It certainly did not look it though, as the team was sprinting and tackling with emphasis, unfazed by the choppy grass and muddy soil of the practice field. After about another hour, practice closed with a huddle at midfield and words of motivation bellowed from within. The huddle broke and the girls departed, each with a look of triumph on the day and a sense of optimism for what lies ahead.

This unique group of young women is the UCR Women’s Rugby Club, and thanks to a collective ambition and unrivaled work ethic, they are experiencing a season of success like none other. “Teamwork, loyalty, character, tenacity.” These are the qualities that Coach Roger Light looks to instill within every one of his players and it has certainly paid off as the team is on the heels of a phenomenal regular season. After a best-ever second-place finish in the SCRFU (Southern California Rugby Football Union) Collegiate Women Division II on a season in which they dominated their opponents to a 5-1 record, the team is now carrying their momentum into its first-ever Division II National Spring Championships.

“Believe me, the reward is not so great without the struggle.” This quote by Olympic sprinter Wilma Rudolph is embedded on the front page of the team website and serves as a reminder that it hasn’t quite always been this easy. When the club was founded in 2011, they had no money, no coaches and not even enough players for a standard 15-woman game. And yet, even after suffering a 120-0 loss in their first game as a team, they were not deterred. As fourth-year player Desirre Milan put it, “We really just wanted to know what it felt like to win.” And so they fought, continuing to improve after each season and they are now finally seeing their diligence pay dividends. It is a season that most team members described simply as “surreal.” From the outside looking in, their journey certainly is hard to believe, but don’t be fooled: This team has always held the utmost confidence in themselves and the “surreal” feeling lies more in the fact that their once lofty ambitions are now tangible.

This team’s accomplishments grow even more inspiring when considering the stigma they have and will continue to fight against. Being women playing in a predominantly male sport is a hurdle that seems nearly impossible to clear, at least in the states, where the sport itself is commonly associated with men and violence. The team takes this in stride, however, with the consensus response being “Hell yeah!” when asked whether or not they enjoy defying this stereotype. “We could play the boys and we would win,” said energetic fourth-year player Tess Wainwright, and she is not alone in her stance, as this sentiment was echoed by the rest of the team.

Behind this swaggering bravado, however, is a level of compassion and humility when they’re out on the field. “When an opposing player is down on the field, we (motivate them) to get up,” says Wainwright. “Competition (does not) get in the way of our heart.” Just as a family, though, their compassion most lies with one another. The team’s ability to pull out a win against top-tier CSU Long Beach squad just hours after finding out that their teammate lost an aunt is just one of many examples of the devotion that they share.

As individuals they each carry heavy hearts but this team also carries with it a heavier burden, which is to bring greater awareness of the club to campus as a whole. Word has yet to spread but they hope that their continued success will bring good fortune in this regard. While the team is not yet on the radar around UCR, the sport itself is certainly gaining traction throughout the nation. As the girls will be the first to tell you, rugby is currently the fastest growing sport in the country, and the NCAA (National College Athletic Association) agreed after classifying it as an “emerging sport” in 2014, and is now currently working to include both men’s and women’s rugby as an official sport under the association. “Club sports don’t get any recognition … next year we want this campus to really start recognizing us,” said fourth-year team captain Alysia Jones.

Perhaps it is time we all start to take notice. It is not just their oozing confidence or surprising success that makes this team so fascinating, it is their heart. This team is a sisterhood, connected not only by the love of a sport but by the love of each other. As Coach Light would attest, camaraderie is what has kept this team on this path and it will be what leads them to success in the future. Reaching all their goals up to this point, this team continues to fight with a drive that is unequaled just to make sure those who still have not heard know one thing: They are a true force to be reckoned with.

The UC Riverside Women’s Rugby Team won its first match in Nationals against Texas State on Saturday, 44-27. The team will now travel to Pittsburgh to face a yet-to-be determined opponent.