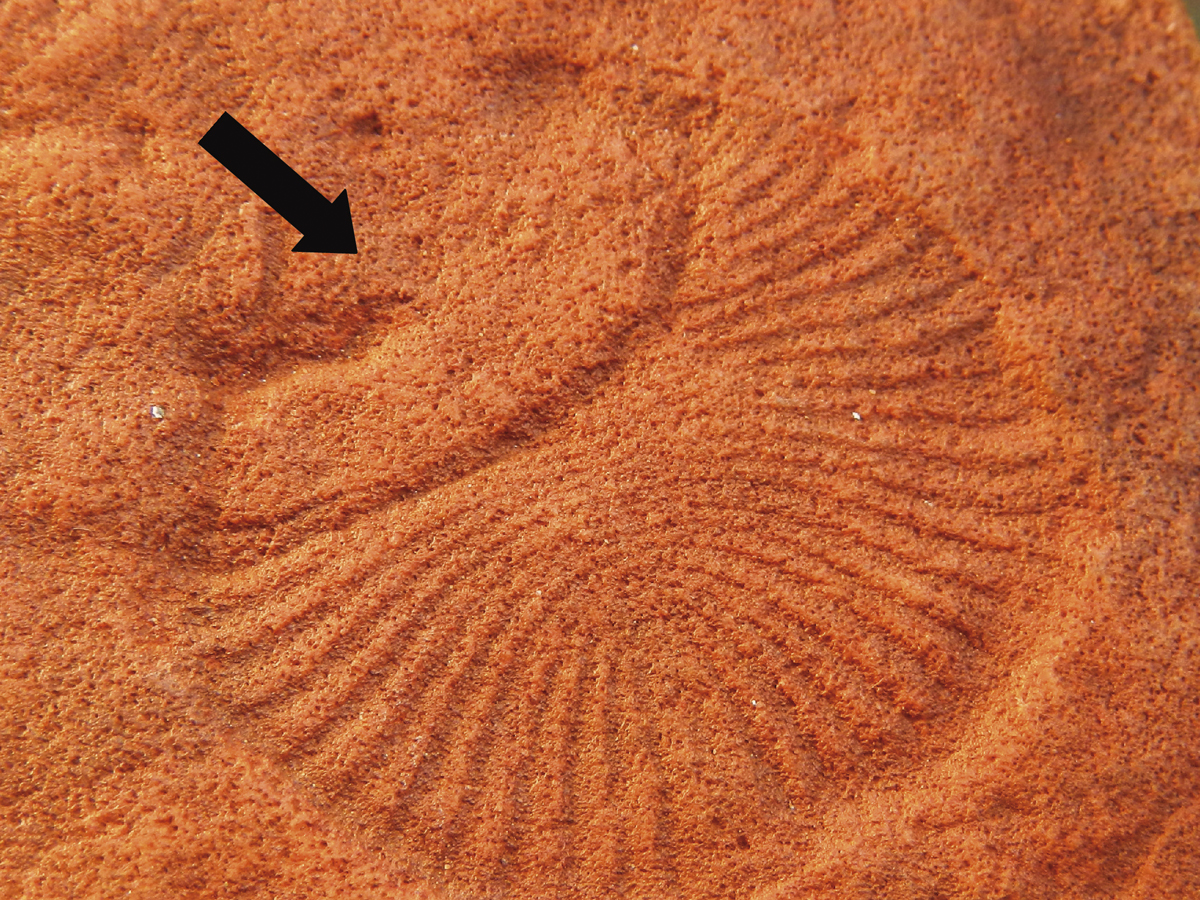 What did the first multicellular animals of early Earth resemble? A recent discovery that specimens of the fossil Dickinsonia were fragmented due to being lifted off the seafloor by ancient currents propelled a team of UC Riverside researchers one step closer to answering questions of early evolution and life on the planet.

Led by second-year earth science graduate student Scott Evans and other UCR paleontologists, the research showed that sand had accumulated underneath Dickinsonia after being lifted, which strongly suggests the organism was mobile, free-living and unattached to the seafloor.

Resembling a ribbed oval, Dickinsonia, a fossil of the Ediacaran biota, inhabited the ancient seafloor some 550 million years ago and now can be found in abundance in South Australia, which is where Evans and Professor of Paleobiology Mary Droser first took notice of the fossils.

“When we started to look at these guys we found an unusually large number of them had parts where it looked like the body was missing. The question became, ‘why are we missing a part of these exceptionally well-preserved fossils?’” Evans explained.

Evans showed that the lift markings on Dickinsonia are all oriented in the same direction, which is reputable evidence that it was a  current lifting them up and eliminated hypotheses of the fossil being fungus or lichen. Predation was also eliminated as a possible answer for the lift markings because predation at that time was nonexistent.

“We know that currents affected these organisms. We looked up the margin of the missing piece to look to see if it was jagged, but it was always smooth, which is evidence that it’s not getting ripped apart,” he expressed. “This is evidence that they are not some organism that lives attached to the sea floor, but something that is a distinct entity and can be lifted off.”

Dickinsonia remains on the radar of paleontologists because these enigmatic animals are the first substantial and complex multicellular organisms, ranging from the size of a human pinky toe to a small table. Yet, according to Droser, there is much unknown about these animals, who were present in a time of great diversity and evolutionary experimentation.

“We have no idea what this thing was. It was common. We think it’s an animal, but these are all very much just starting places of trying to figure out,” Droser explained. “We’re working on really documenting its ability to move, so you can start to imagine something that might have been on the seafloor and eating through its underside and when a current comes, it lifts it up because it’s not firmly attached.

For Evans, this fossil not only provides a special lens with which to view the past, but also a progressive step for the study of evolution.

“When we look at a fossil, you can see where it lived, you can learn more about the Ediacaran, not just the biology of the organism that lived, but what was the seafloor like (and) how was it affected by the waves,” he noted. “This biota is a huge step in evolution.”

“When we look to find life on other planets, we run the experiment of advent life on this planet and the evolution of life on this planet. So you go back in time to say how did life evolve? And so this is at the very beginning, these are the very first multicellular animals on the planet,” Droser said. “It’s the very beginning stage of multicellular life evolving. It’s a phenomenal time in life’s history and we still don’t know much about it.”