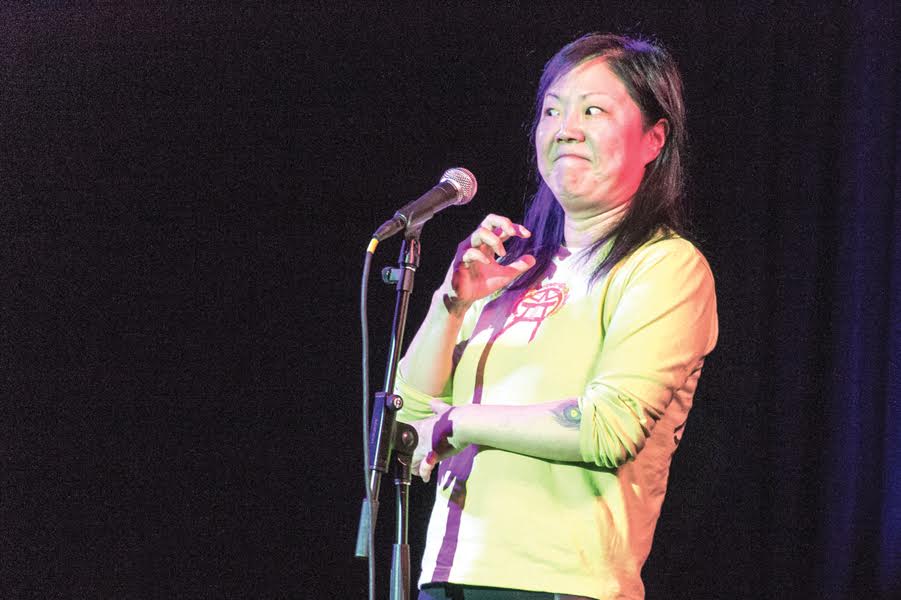 I think it’s appropriate for this event to be named “The Last Laugh.” It’s the end of the school year, and everybody’s busy catching up on their classes, preparing for finals and buying copious amounts of coffee to actually start studying for exams during finals week. But fortunately, students were reminded that we’re not defined by how much time we spend studying for exams, but instead by how much we laugh — by how much we live — and that we always have the last laugh over our temporary struggles.

The show took place inside the Student Recreation Center at 7 p.m. with a rush of students made their way into the basketball stadium. Despite it being very late in the quarter, the turnout was strong, as a few hundred students sat down in either a folding chair or a spot in the stadium seats.

The event kicked off with a warmup act in Selene Luna. As a little person, Luna wasn’t afraid to talk about her physical condition in her humor, as well as incorporating various aspects of personal experiences. She opened the show with her views on one-night stands by noting how she can’t do them anymore because “he’ll be afraid I’m gonna die in the middle of the night — from SIDS” followed with “wow, you guys are sick” when the audience laughed. She elaborated her thoughts on personal fetishes (“BDSM is as hot as Burning Man or a Renaissance faire”) to the decapitation of a cousin from a drug cartel (“hashtag decap!”), Luna’s comedy hit the right kind low that blurred the lines between horrifying and laugh-your-ass-off hilarity.

Of course, there was horror to be found in Luna’s more mundane experiences, like the terror of being unable to wear high heels, or to even be prescribed medically-modified crocs — a feeling Luna was able to share with us all as she exclaimed, “Crocs, you guys! Fucking Crocs!” She also shook my faith in shows like “Ghost Hunters” by asking “Why is every haunting always some Victorian white bitch? Where are all the ghosts of color!” Overall, Luna’s routine warmed the audience up with her offend-all style of humor, and was a friendly reminder that one can step outside their comfort zone in choosing when to laugh.

Following Luna came the primary act in Margaret Cho. Cho is a famous comedian of Korean descent whose rise to popularity in the ‘90s helped pave the way for many other Asian-American actors and shows to break new ground, such as “Fresh Off the Boat.” Coincidentally, that was the first subject for her routine. Showing excitement for “Fresh Off the Boat’s” second season renewal, Cho tied it back to her experiences in “All-American Girl.” “That was 21 years ago,” Cho said. “I fucked it up so badly they had to wait for an entire generation of Asian-Americans to be born and totally forget what happened before they could try it again.”

Cho is known for talking about her heritage and upbringing in her comedy, which she did here. Explaining that ABC originally didn’t want to run “Fresh Off the Boat” for being perceived as racist, she defended the show, noting, “I grew up very ‘fresh off the boat’ in San Francisco. My family came from Korea, and we were so ‘fresh off the boat’ that all the food in my lunchbox had eyes.”

Sex and sexuality was another topic Cho wasn’t afraid to tackle onstage. For many (myself included) who grew up amidst the most WASP (White Anglo-Saxon Protestant)-esq of WASP backgrounds, it’s great to hear someone discussing a marginalized section of society. Although married, Cho’s marriage has been described as open, and she is also openly bisexual. She talked about her feelings toward her own sexuality, noting that she sometimes feels bad for some Asian-American women who end up with “busted, broken up” white men with little prospects, before pinpointing that she doesn’t have a problem being with them: “(They’re) very exotic.” After joking about being able to handle white guys (“it’s not eggplant-Friday”), she made sure not to exclude others along the LGBT spectrum by following that up with “all the lesbians here are like, ‘is that a hashtag?’”

Jokes like that are what helped Cho kill it in her routine, because as someone who’s a minority (both ethnically and sexuality-wise), she’s able to play around with certain cultural tropes and generate laughter through the irony.

Cho also delved into her experiences with philanthropy and her relationships with other famous comedians. Inspired to assist the homeless following the passing of Robin Williams, who was known for hiring homeless people to work as crews for his films, she talked about working at a homeless charity event (“I nearly shit my $5,000 pants and got all kinds of homeless Ebola you can get”) and bombing her routine at a rape center benefit. “That’s really sad,” she said, “because that means that you’re worse than rape.” A noted survivor of sexual assault, Cho went to Joan Rivers, one of her influences and best friends, for comfort. “She was the wind beneath my wings,” she noted.

She ended the show with a return to sexuality in the LGBT community, mentioning “I was always a fag hag ever since I was a kid.” Cho explored her relationships with others growing up with “hand-me-down gays” from her mother, who she claimed set her up with “an old gay man and little girl kind of relationship, which is the best combination of people. Nothing bad can happen; he will watch ‘Twilight’ as many times as you want.”

Overall, Cho’s performance was as spectacular as it was edgy, and she wasn’t afraid to take on subjects that make most people fidget uncomfortably in their seats. I left the show with a fresh mind, clean from the banality of studying for final exams, and all the students who didn’t attend the performance missed out on that mental boost we all honestly need.